You are here: Home / Press Release Wire / Judge Michael Cherry to be honored by ADL on June 3, 2015 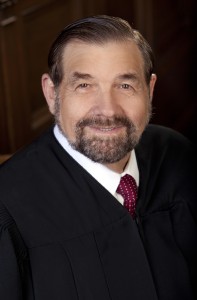 The Honorable Michael A. Cherry, chief justice of the Nevada Supreme Court, will receive the 2015 Jurisprudence Award by the Anti-Defamation League of Nevada on Wednesday, June 3. The award luncheon begins at 11:45 a.m. in downtown Las Vegas.

Tickets are available for purchase through the ADL office by calling (702) 862-8600 or by emailing jbrislin@adl.org.

The Honorable Philip M. Pro (ret.) will be the keynote speaker with remarks by former Sen. Richard Bryan.
“I have known Judge Cherry for many years, and the ADL has been privileged to have him as an active advocate and past chairman,” said Jolie Brislin, ADL Nevada regional director. “His integrity, ability and vision to see the entire picture on issues has been a great resource to ADL and the entire community, resulting in a lasting legacy of great work for both.”

The Jurisprudence Award recognizes a Nevada legal professional or organization that reflects the values of civil rights and the mission of the ADL in combating anti-Semitism, prejudice and hate in the community and generating awareness among its citizens.

An attorney in Nevada since 1970, Cherry is a champion for civil rights and has been an advocate for the ADL mission. He was elected to the Supreme Court in 2006 and chairs the Indigent Defense Commission and is the supervising justice over the Senior Justice and Judge Program.

Prior to other elected and appointed positions, he assumed the duties of special master of the Las Vegas Hilton fire litigation where his work gained nationwide recognition for procedures he established which are now part of most mass disaster litigation. Cherry also has been honored by several professional, civic, religious and educational organizations. He earned his bachelor’s degree from the University of Missouri and juris doctorate degree from Washington University School of Law.  He also served as a 1st Lieutenant with the U.S. Air Force Reserve.