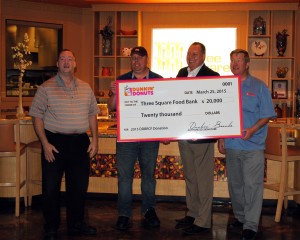 LAS VEGAS – Three Square Food Bank announced that they have received a $20,000 grant from The Dunkin’ Donuts & Baskin-Robbins Community Foundation (DDBRCF).  In the second year of a three-year, $1,000,000 commitment, The DDBRCF is working closely with Feeding America® to support child-hunger initiatives nationwide.  More than 128,000 children face hunger in Southern Nevada and this grant will help Three Square better serve those kids in need.

The BackPack for Kids Program provides hungry children with nutritious and easy-to-prepare food to take home on weekends and school vacations when other resources are not available.

“With more than 58 percent of students in Clark County eligible for free-and-reduced-price meals, programs such as BackPack for Kids are integral to providing necessary nutrition for our community’s children,” said Brian Burton, President and CEO of Three Square. “We are blessed to receive support from our partners at The Dunkin’ Donuts & Baskin-Robbins Community Foundation as we continue our fight to end hunger in Southern Nevada.”

Three Square’s BackPack for Kids Program currently assists approximately 260 schools, providing more than 5,000 children with supplemental weekend meals each week. The funds from this grant will go to help purchase shelf-stable, ready-to-eat food items for children who are identified as being at-risk for insufficient nutrition during weekends and breaks from school.

“We’re so excited to continue into the second year of commitment to support Feeding America’s child-hunger efforts with the largest donation in DDBRCF history,” said Dana Stinard, Central West Chapter Co-Chair of The Dunkin’ Donuts & Baskin-Robbins Community Foundation. “Dunkin’ Brands and its franchisees incorporate serving those in need in our communities across the country into every part of our business. Supporting the fight against hunger and particularly childhood hunger has been rewarding work.”

The $1,000,000 grant, the largest donation in DDBRCF history, will be distributed among Feeding America member food banks across the United States over the next three years.  Last year, fifteen Feeding America member food banks each received $20,000 grants.  The DDBRCF has partnered with Feeding America at the national level since 2007 and, in addition to the most recent grant, has donated more than $1,000,000over the past eight years to support Feeding America and its local food banks. Additionally, over the past eight years, The DDBRCF has addressed the issue of hunger relief through both national and local effort. Dunkin’ Donuts and Baskin-Robbins franchisees have held fundraisers to support local food banks, led food drives in the communities they serve and organized volunteer days at their local food banks to help fill backpacks with nutritious meals for children.

Established in 2007 to provide hunger relief, Three Square Food Bank offers wholesome, nutritious food to nonprofit and faith-based organizations, schools and feeding sites that serve a wide range of Southern Nevadans. A national model project inspired by Founder Eric Hilton with a grant provided by the Conrad N. Hilton Foundation, Three Square is a community collaborative partnership with businesses, nonprofit agencies, food distributors, higher education institutions, the Clark County School District, governmental entities, the media and thousands of volunteers to efficiently and effectively work together to serve those in our community struggling with hunger. Three Square currently provides more than 34 million pounds of food and grocery product – the equivalent of more than 28 million meals – per year to more than 1,300 community partners.  Three Square is a member of the Feeding America network of food banks. For additional information visit www.threesquare.org. For the latest news and events on Three Square, visit Facebook and follow them on Instagram and Twitter (@threesquarelv).

The mission of The Dunkin’ Donuts & Baskin-Robbins Community Foundation is to serve its neighborhoods by taking care of their basic needs: hunger, children’s health and safety. The DDBRCF brings together a wide network of stakeholders, including franchisees, crew members and employees to serve their local communities. Launched in 2006, The DDBRCF has granted more than $8,000,000 to local charities.