You are here: Home / Press Release Wire / The Las Vegas Philharmonic Performs its Masterworks Series Finale on Saturday, April 25 at The Smith Center 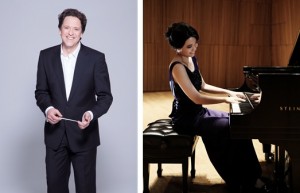 “I’m very excited to present this final Masterworks program of the 2014-15 season – it really reflects what is exciting and unique about a live performance by a versatile and virtuosic orchestra like we have here in Las Vegas. It is also a preview of the type of concert programming I’ve created for our fantastic audience for the 2015-16 season,” expressed Donato Cabrera.

“We begin the program with what has become a modern-day classic, John Adams’ infectious ‘foxtrot’ for orchestra, The Chairman Dances, said Cabrera. “The first half of the concert ends with Rachmaninoff’s timeless Rhapsody on a Theme by Paganini, which includes one of the most recognizable and beloved themes in all of music. The concert concludes with Tchaikovsky’s ever-popular and stirring Symphony No. 5. This concert is not to be missed!”

Adams’ 1985 work, The Chairman Dances, was inspired by Act III of Adams’ opera Nixon in China and commissioned by the National Endowment for the Arts for the Milwaukee Symphony. The music depicts Chairman Mao and his mistress Chiang Ch’ing dancing a foxtrot back in an earlier time.  The work demonstrates Adams’ minimalistic style, incorporating jazz elements and a chugging rhythm.

Rachmaninoff’s Rhapsody on a Theme of Paganini was based on Nicolò Paganini’s Caprices No. 24 in A minor for violin and incorporated the legend of Paganini as a demonic violinist who traded his soul for mastery of his art. The work includes 24 variations for solo piano, from the dark melody of Dies Irae (“Day of Wrath”) from the Requiem Mass for the Dead to the lovely and widely-recognized melody of variation 18.

Guest pianist Joyce Yang joins the Las Vegas Philharmonic to perform Rachmaninoff’s Rhapsody on a Theme of Paganini. Yang started her studies at the age of four in Seoul, Korea. She attended the School of Music at the Korea National University of Arts at the age of 10 and went on to attend the pre-college division of Julliard in New York. She won the silver medal at the 12th Van Cliburn International Piano Competition, received Juilliard’s 2010 Arthur Rubinstein Prize, and won the 30th Annual William A. Petschek Piano Recital Award. Yang has performed with many high profile orchestras including the New York Philharmonic, Chicago Symphony, Los Angeles Philharmonic, and San Francisco Symphony.

Tchaikovsky’s Symphony No. 5 closes the orchestra’s Masterworks program.  The first movement starts slow and somber, indicative of the overall theme regarding fate, and ends energetically in the fourth movement. Although Tchaikovsky had his doubts regarding the success of his symphony, the music went on to become one of his most popular works.

The Las Vegas Philharmonic offers $26 tickets for balcony seating at all of its 2014-15 season concerts.  Seats in other sections are priced $46, $66 and $96.  Tickets are available from The Smith Center Box Office, phone 702.749.2000 or online from lvphil.org.  A 50% student discount is available on all single ticket purchases (ID required) and a 10% discount is available to seniors and military personnel.  Groups of 10 or more receive 20% off the ticket price by calling the Las Vegas Philharmonic.

Subscriptions to the Las Vegas Philharmonic’s 2015-16 season are now on sale.  May 1, 2015 is the deadline to receive the 10% discount on subscription orders and for renewing subscribers to secure their same seats.  Subscription prices before May 1st range from $119 for a 5-concert package to $868 for a premium 10-concert package.  After May 1st, the prices increase from $130 to $960, respectively.

Pre-concert conversation with Donato Cabrera at 6:45 p.m. in Reynolds Hall

The Chairman Dances (Foxtrot for Orchestra)

Rhapsody on a Theme of Paganini

Music Director Donato Cabrera completes his first Masterworks Series with a program featuring composers over a one hundred-year span including the stunning keyboard showcase of Rachmaninoff’s Rhapsody on a Theme of Paganini to be performed by thrilling young pianist Joyce Yang.  Iconic American composer John Adams’ The Chairman Dances, a “foxtrot for orchestra,” opens the program and the series closes in stunning style with Tchaikovsky’s lush Fifth Symphony.