You are here: Home / Features / Building Nevada / If You Build It, Will They Come? 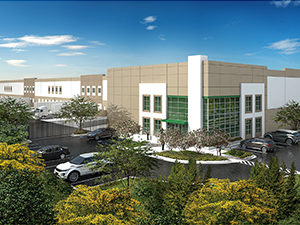 Nevada’s industrial market, which was devastated by the recession, has now recovered to the point where developers have returned to the market with “spec” projects (those built in advance of a contract or buyer). Now that 2014 year-end numbers have been tallied and evaluated, commercial real estate experts agree that the market is definitely rebounding.

Kevin Higgins, SIOR, executive vice president at Voit Real Estate Services, noted, “The trend from 2014 to 2015 is much better. Projects under construction [in Southern Nevada] have increased by 75 percent and planned projects are up 62 percent. Vacancies have dropped by one third, from 11.9 percent to 8.1 percent, which is a significant improvement from January 2014 to January 2015. We’ve seen a steady upward trend for the last three years.”

Charles Van Geel, 2015 Chapter President of NAIOP of Southern Nevada, added, “The big difference from a year ago is that several developers have committed to build spec industrial buildings and are working with cities to get the proper entitlements. There was talk a year ago, but no one had yet pulled the trigger. Today, 3 to 4 million square feet of industrial projects are in the pipeline in Southern Nevada.” Van Geel is also vice president for commercial leasing and sales at American Nevada Company.

Jeff Foster, vice president and market officer for Prologis, noted that Las Vegas was one of the last markets in the U.S. to recover from the recession. “We’ve been the direct beneficiary of the economic recovery over the last eight quarters,” he said. “[Prologis] had double-digit (25 percent) vacancy at the bottom, and now we’ve taken it back to 100 percent leased. You can’t do much better than that. The recovery started in the first quarter of 2014, and it’s been a steady progression since then. We’re starting with spec again and also looking at some build-to-suits.”

The Reno industrial market also showed positive numbers in 2014, with strong leasing activity and rising rates in the face of increased demand. Nearly 3.8 million square feet were absorbed in 2014, and vacancy at the end of the year was only 6.7 percent. Interest in Northern Nevada manufacturing was given a boost by Telsa’s announcement that their $5 billion “gigafactory” for lithium-ion batteries would be built at the Tahoe-Reno Industrial Center east of Reno in Storey County. At the same location, Switch is building a $1 billion, 3 million square feet data center.

Why Here? Why Now?

The main driver behind the recovering industrial market is the U.S. economy. As consumer confidence returns and spending increases, retailers see the wisdom of investing in big box facilities where their products can be stored and distributed, and manufacturers are starting to ramp up production. The economic recovery has also positively impacted gaming, tourism, and conventions, which are major forces in Nevada’s economy, especially in the Las Vegas market.

As the economy improves, many industrial tenants are choosing to locate or expand in Nevada because of factors that have historically made the Silver State an attractive choice: location, cost and tax advantages. Reno’s location allows trucking companies to provide overnight delivery to 80 percent of the 11 contiguous Western states. In addition, Las Vegas is just a four hour drive from the Inland Empire, with access to 30 million people in Southern California. Even projects in outlying areas are getting attention after a March 2015 report from The Boyd Company, Inc. ranked Fernley and Mesquite among the nation’s top 25 “logistics-friendly” cities based on factors such as location and operating costs.

Another factor is the current low interest rate environment, which helps users who want to construct a building for their own use, as well as making it easier for investors and developers to finance projects.On the resurgence of spec construction, Foster noted, “Interest rates are a factor, but higher rental rates are more important. Rates had fallen so much that it didn’t make sense to build a project, but deals pencil now because rates are higher, so smaller developers and investors can get financing for their projects.”

Higgins agreed saying, “Even 15 months ago we weren’t at a rental structure point that would allow developers to make the returns they needed. Rates are up 20 to 30 percent across the board in the last 12 months. Big box distribution (250,000 square feet or more) was 28 to 30 cents per square foot a year ago; now it’s 36 to 37 cents, a significant increase. Good old economics of supply and demand were responsible: very little supply, plus new demand for larger spaces over 100,000 square feet.”

The industrial market includes everything from small owner-occupied buildings to huge distribution centers totaling hundreds of thousands of square feet. This means that the type of occupant varies by location, size of the project, and ability of the building to be divided into smaller spaces. That being said, most of the recent activity in the market has been in the big-box segment for tenants in retail distribution, e-commerce distribution, and third party logistics (3PL). In Southern Nevada, companies that support the convention and trade show business with services such as carpet rental, sound and lighting and graphic design play an important role in leasing large facilities to store their materials.

Demand for smaller spaces is also increasing as the economy rebounds. “Big box tenants have been very active for three to four years, but it’s nice to see that we now have growth among smaller tenants, occupying spaces from 25,000 to 50,000 square feet,” said Doug Roberts, Partner, Panattoni Development Company, Inc. “They tend to be local or regional companies that are either expanding or moving into the area. We’ve seen a real uptick in the small-tenant base in the last four to six months.”
While manufacturing plays an important role in the Reno economy and in its commercial real estate market, it isn’t a major factor in the rebound of the state’s industrial numbers overall. In Southern Nevada, Foster estimates that manufacturing makes up less than 15 percent of Prologis’ business.

Panattoni is currently developing two projects in southern Nevada. Henderson Freeway Crossings, six buildings near the Henderson Spaghetti Bowl, with a total of 450,000 square feet on completion. Jones Corporate Park is 416,000 Square feet of distribution space in two buildings at Jones and Sunset in Las Vegas.

In Reno, Dermody broke ground in November 2014 on the final two buildings in its LogistiCenter 395. They will add nearly 627,000 square feet to the industrial park, bringing the total square footage to 1.2 million.

These are just a few of the mega-projects currently under development. However, rebounding demand for smaller spaces, along with higher rental rates, have signaled the return of small to mid-sized developers and investors. Roberts noted, “[Panattoni] is a national company with large capital partners, so we can propose large buildings on spec that are way beyond the means of local developers because they require tens of millions of dollars. On the other hand, we don’t have the interest or the ability to work in those smaller buildings, which creates a niche market for smaller developers to cater to smaller tenants.”

Higgins said, “Several local or regional players are now building projects from 5,000 to 50,000 Square feet on parcels sized from five to 20 acres. We’ll see a handful of these projects in the next couple of months, including freestanding buildings for users.”

NAIOP’s Van Geel noted that entitling projects in advance of demand give developers the option of acting quickly if necessary. “Economic development folks tell you that nationally recognized tenants are looking at Southern Nevada for facilities with space requirements of 200,000 square feet or more,” he said. “Having projects already entitled and ready to go may entice some of these tenants to come here, so if I have an existing project, I’ll be ahead of the competition. That’s what Prologis, Panattoni and Harsch are betting on, and I think they’re right.”

Many agree that 2015 will be a good year for Nevada’s industrial market. Industrial projects are sprouting up all across the Silver State as developers construct spec buildings and users expand current facilities. Smaller developers and investors have returned to the market in response to rising rental rates and a positive interest rate environment. At the end of 2014, nearly 2.4 million square feet of construction was underway in the Reno market.

“As for pure development volume, it should be a very significant year for both Northern and Southern Nevada,” Roberts stated. “A lot of brokers have lamented that there are no projects for them to lease. By the end of the year we’ll have a lot more projects to lease, both for brokers representing landlords and for those representing tenants looking for space.”

Lease rates in both major Nevada markets are predicted to rise in 2015 in response to increased demand. Vacancy rates may fluctuate, rising as completed projects are added to “standing inventory” numbers, then falling as those projects are leased. Roberts expects the vacancy rate to decrease, but at a slower rate than last year, while Higgins says Southern Nevada rates may decrease from the current 8.1 percent to the mid-single digits.

Van Geel said the outlook for Southern Nevada is positive. “We have about 120 million square feet of industrial space now. At a minimum, we can assume that another 2 million Square feet will be added before the end of the year.” Foster agreed, saying, “We’ll see more building and more leasing. The market will tighten further as additional developers and investors come into the market. It won’t be as frothy as the 2004-2006 heyday, but clearly the seven years of no spec construction are over.”

Van Geel summed it up, stating, “I’m optimistic. In 2013 and 2014 we were starting to recover. We’re definitely in full recovery mode now.”