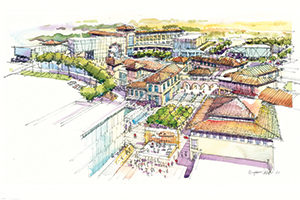 Until recently, the term “medical tourism” largely referred to Americans traveling out of the country looking for affordable healthcare in technologically advanced but less expensive venues, from Mexico to Thailand and parts in between.

Now the term is starting to come home, often referring to domestic travel of American citizens within U.S. borders, traveling to find the best healthcare available.

In addition, until recently the best healthcare in the country didn’t include Nevada. When ranked according to the number of hospital beds per 1,000 people, or physicians or nurses per 1,000, Nevada ranks 47th, which isn’t care worth leaving home for.

However, things are changing by building off a new quality of healthcare and one of Nevada’s core strengths: an incredibly business-friendly environment.

In Northern Nevada, medical tourism is still in the foundational stage.

There are a few ways to define medical tourism. “One is that you fill up your beds because you have a nice spa, and call it medical tourism,” said Rob Hooper, executive director, Northern Nevada Development Authority (NNDA). The other is when people needing medical treatment travel somewhere to get that treatment because it’s not available or it’s not affordable where they live. Hooper added that some travel “to get treatment because it’s a great place to be for you and your family while you’re recovering or getting treatment.”

What Hooper and NNDA are pushing for is that second option – having treatments available in Nevada that aren’t available anywhere else. “We’re in the foundational phase,” said Hooper.

Part of that foundation involves Dr. Jackie See, a cardiologist out of Southern California, licensed in both California and Nevada, Dr. See plans to open a stem cell research and treatment center in Carson City. The first wave of stem cell research and practice involves spinning stem cells out of adipose tissue – belly fat – and injecting them into joints. There are probably 1,500 clinics in the country doing that, said Hooper; a couple years ago there was only one.

“Most people have stem cells mixed up and think it’s only from fetal tissue,” said Hooper. “What Dr. See is doing is not fetal tissue. Why? Everyone expects a philosophical answer, but the answer is because they don’t work very well.”

With the new stem cell treatment procedures, there are all kinds of local, state and federal regulatory hoops that have to be jumped through, but by benefit of locating in Nevada, that process is a lot quicker.

“We’re able to do it faster here because we have the development authorities working with us, the Governor’s office, the legislature and the local authorities in Carson City. We’re proceeding along over a five year period, doing something that would take 20 years to do in a large metropolitan area. That’s the attraction to Nevada,” said Dr. See.

Not only does a small, business-friendly state make the regulatory process quicker, but, “people like to go to Nevada. There’s a lot to do, you can go to Lake Tahoe, go skiing. It’s very popular and a worldwide destination, so we actually have an international presence.”

In Nevada, qualified medical doctors from out of state or out of the country can attain a temporary medical license that’s tied to a specific institution or procedure within 30 days. “So a doctor from Germany can come here and immediately – for them, because 30 days isn’t that long – be set up to practice or bring patients here,” said Hooper.

Which isn’t to say it isn’t a long, slow process to bring medical treatment companies into the state. While Dr. See finds Nevada faster than California, his clinic is still two years from opening. In Southern Nevada, advocates have been working to bring medical tourism into Nevada for five or six years.

In Southern Nevada, plans are underway to bring in medical tourism as an economic driver that would benefit both the economy and local residents by adding to the growing portfolio of healthcare providers and services. Some 300 to 400 pages of research back up the 23-page Las Vegas Regional Strategic Plan for Medical & Wellness Tourism, a unified vision meant to create a medical tourism blueprint and game plan. Key players in the creation of the plan include Las Vegas Global Economic Alliance (LVGEA), Cheryl Smith, medical and wellness tourism manager for Las Vegas Convention and Visitors Authority (LVCVA), Las Vegas HEALS and Stowe Shoemaker, dean of the William F. Harrah College of Hotel Administration at the University of Nevada, Las Vegas (UNLV).

For a little over a year, LVGEA personnel met with medical industry and economic development people as well as academics, and performed national and international outreach to areas that have already developed medical tourism. Michael Vannozzi, director of public policy at LVGEA explained that the organization has been, “active at the World Medical Tourism Congress that took place in Las Vegas in 2013. In 2014, we were also active in the Medical Congress in Washington DC. We really wanted to get our arms around how Las Vegas can compete in this space.”

The authors of the report talked with companies that already exist in Nevada and are part of medical tourism, like the Comprehensive Cancer Centers of Nevada, to look at information like where patients are traveling from and define the market a little further.

“Another opportunity was the specific industry that economic development focuses on – the recruitment of wellness travel agents,” said Vannozzi. These travel agents focus on facilitating medical travel. “They’re specialists at this. Some of them work with corporate clients and their job is to facilitate medical travel to reduce overall liability for health issues of their employees.”

For example, a corporation might be willing to pay for an employee to travel for heart surgery to a Cleveland Clinic where having the surgery at home in a different facility, the employee would pay out of pocket. Vanozzoi said that a corporation might do that, “because Cleveland Clinic outcomes are better on the whole than the outcomes of other hospitals, and they can actually spread the risk better.” Wellness travel agents are an integral in making medical travel possible.

A key player bringing in medical tourism is Las Vegas HEALS, which stands for Health Education Advocacy and Leadership in Southern Nevada. The organization was founded in 2002 to create a collaborative effort between local government, the medical and business communities, the university system and the healthcare industry.

“We are already starting to make huge changes in our healthcare community and portfolio of investors,” said Bob Cooper, founder. There’s the Cleveland Clinic Lou Ruvo Center for Brain Health that attracts people from all over the world, as does the Comprehensive Cancer Center.

There are also specific practice areas attracting medical tourists, like fertility, Alzheimer’s research, bariatric surgeries, cancer research and treatment and orthopedics. “So we’re not building from scratch, these are things we can build upon and other industries within the healthcare field see what we’re doing to market and promote the area. I would think they would start seeing their marketplace from a more global perspective,” said Cooper.

There are more components important to growing a medical tourism industry in a state than just healthcare companies. No destination is going to succeed without international airports, which Nevada has. Also important are the cities themselves, said Cooper, pointing out Las Vegas created a medical district and is recruiting healthcare professionals and creating a downtown area research training facility.

The City of Henderson created a partnership with Union Village, selling 160 acres to investors out of Southern California to create a new style residential and medical community.

Union Village, the world’s first integrated health village, broke ground in October of last year. “The idea behind it is to focus on the continuum of care,” said Karla Perez, regional vice president, Universal Health Services which will open a hospital on the campus. The intent is for the development to cover everything from delivering babies to providing senior housing.

Phase 1 is set to open in the fourth quarter of 2016, with a hospital, skilled nursing facility, a long-term acute care hospital and 300 assisted and independent living units. In this case, “senior living” shouldn’t conjure images of nursing homes. The village will also offer a 40,000- to 50,000-square-foot wellness center, a 75,000-square-foot athletic center, medical offices, an ambulatory care center, condos and a retail and entertainment center.

Valley Health, part of Universal Health Services, is partnering with Union Village to develop the acute care Henderson Hospital, important both to medical tourism and to Southern Nevada residents because currently healthcare facilities are overcrowded.

“We just don’t have enough space for all our patients,” said Perez. While that’s not every day of the year – there are peak times of emergency room use – it does show a need for more facilities. “It’s going to be very difficult to bring patients from other countries or other parts of the United States to Las Vegas if we don’t have the capacity and capability to take care of our own.”

Union Village principals were looking for a site with great freeway access to make it accessible for everybody in the region, catching up some of those healthcare numbers by providing more beds, doctors and nurses. “The City of Henderson had the right property at the right time,” said Johnson.

According to Johnson, Union Village will bring an estimated $1.5 billion investment into the market, 17,000 direct, indirect and construction jobs, over $8 billion in payroll and income tax and $1.5 billion in property and sales tax. According to Perez, Henderson Hospital will employ approximately 500 people on opening, and add to other Valley Health facilities already offering the types of surgical procedures the tourism initiative is focusing on, such as bariatric and plastic surgeries.

Nevada already has some medical tourism draws in place. Tahoe Fracture & Orthopedic Medical Clinic, Inc., and Tahoe Orthopedics & Sports Medicine specialize in skiing and other sports injuries, perfectly located at Lake Tahoe because of the world-class skiing. Enthusiasts with joint issues access the clinics, and because of the specialties, others will travel for treatment at the centers, according to Hooper.

Dr. See has met with Carson Tahoe Hospital personnel and finds the center ideal for his needs.

Dr. See’s group has also met extensively with School of Medicine personnel from University of Nevada, Reno. “We’ll want to be able to employ their scientists in doing stem cell research with us,” he said.

In addition to the University of Nevada, Reno, School of Medicine, UNLV is starting their own medical school and Roseman University is looking to open a College of Medicine in Southern Nevada.

“Las Vegas is definitely going to become a medical tourism destination. In some ways it already is. The Cleveland Clinic Lou Ruvo Center for Brain Health attracts people from all over the world because they are literally the best doctors,” said Vannozzi. “The Comprehensive Cancer Centers of Nevada attracts people from all over the country and the world because they have the most innovative new clinical trials in cancer. Through the Village, the Las Vegas Medical District and providers that have niche markets like orthopedic, medical imaging or fertility providers, people now realize the connectivity Las Vegas offers. The 40 million people we see a year represent an opportunity to grow business. I think that we’re going to, as much as possible, help them to leverage that.”

Case in point? “We’re in the fifth year, and the first two years were spent mainly in discussion [about the stem cell clinics]. Everything we’ve discussed and that we were promised has been delivered promptly on time or faster than that, which is, I think, something you can only do in Nevada, with the highest possible standards,” said Dr. See.