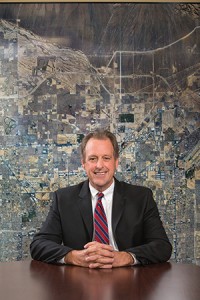 As Nevada’s economy picks up the pace, businesses are returning to Nevada and Nevada is returning to business – mostly. In Southern Nevada there’s no real wage growth, gaming revenues are down, home sales are slowing. At the same time, industrial property vacancies are dropping, flex space rents are low but flex spaces themselves are filling, and big box industrial space is almost completely filled. In the north, Tesla is headed into the Tahoe-Reno Industrial Center, developers are finishing out stalled projects and new developments are breaking ground.

Doug Roberts, a partner with Panattoni Development which works in both Northern and Southern Nevada, said the north end of the state actually started to recover six to 12 months before the South. He attests that recovery is, in part, because e-commerce started in the north in late 2012, early 2013, and didn’t start in Southern Nevada until some time in 2014.

With Reno serving as an active ground transportation distribution hub for the 11 Western states, it makes sense geographically for e-commerce to choose it. Dermody Properties brought Urban Outfitters into Reno in 2010, while the recession still gripped Nevada, and the fulfillment and distribution center trend should continue.

“About 30 percent of national leasing activity last year was related to e-commerce,” said Michael Dermody, chairman and CEO. “In 2014, about 6 percent of U.S. retail sales were through the e-commerce channel. We expect that to grow significantly, up into the 20 percent range over the next three to five years, and that means a lot more customers will need to source new buildings in markets like Reno.”

Reno offers more than just geographic advantages. “One very telling statistic: there’s 75 million square feet of industrial space in Reno with a population base of 350,000. That’s the highest population per capita in America for the industry,” said Dermody. “That’s a pretty compelling statistic, and why a company like Tesla took a look here. It’s a good place to do business.”

“Right now we are aware of some larger big box space planned for the [Southern Nevada] marketplace over the next 12 to 18 months,” said John Ramous, regional manager Las Vegas, Harsch Investment Properties. “What I’m hearing is maybe 3 to 4 million square feet of larger bay product on speculative basis is being planned, and we haven’t seen that in seven or eight years. This would count as one of our strongest times if we see all that construction happening.”

Vacancies vary across the Valley. In Henderson there’s a very limited supply of both large and small product in the marketplace which is the highest occupied submarket, having grown 6 or 7 percent in recent years. But head across the Valley and there are higher vacancies in North Las Vegas. “We do see some opportunities happening there in the next six to 12 months,” said Ramous. “And we’ll probably see some speculative development happening there in the near term.”

Principals at Harsch Investment Properties have seen occupancy go up drastically in the last 12 months, on average about 6 to 10 percent. Of their 8.5 million square feet of space, some 90 percent is filled for the first time since 2007. Now the company is looking at land holdings in Henderson, planning to start new developments and finish out phases of others.

“In the past couple years we’ve seen a lot of strong demand from existing tenants and existing businesses that needed more space, so those 2,000- and 3,000-square-foot tenants are going to 4,000 and 5,000 square feet,” said Ramous. Companies that left the state during the downturn, like flooring and furniture companies, are finally returning.

“New businesses are coming in from out of state,” Ramous added. “That part of the business has started to rebound quite a bit even on the smaller side, businesses starting with 6,000 to 10,000 square feet. There are certainly some large companies coming into the area as well, so it’s a good cross section.”

Office space is still a fairly soft market, and there probably won’t be much built in the near future. Industrial is the healthiest of the commercial real estate markets and investment has tripled in the last few years, said Roberts.

“It’s (industrial market) been the first to recover, and I think you’ll see smaller regional buildings get built in the next 12 to 18 months with more mom and pop, local companies who want to lease more space.’

Survivors of the Downturn

So did development companies that survived the downturn survive within Nevada’s borders? Or did they find work outside the state? And if so, have they returned?

Panattoni made it through by finding niche opportunities at both ends of the state, Roberts said. “We found existing buildings or distressed properties, did a couple build-to-suit projects, and it got us through the hard times. It was tough, but we were able to work with local brokerage firms and keep our eye on the business and make sure we had projects to get us through.” Panattoni has projects around the country and around the world, but the company isn’t seeing more of its projects out of state than usual, and in terms of total dollars, will likely do $150 million worth of development in Nevada over the next 12 months.

Keeping developer business healthy and in Nevada is vital to the state’s economy. In the September 2014 special session, Nevada’s Legislature gave developers a package of economic development and diversification tools, including the economic diversification district. Senate Bill No. 1 (SB1) allows a company that plans to invest at least $3.5 billion in Nevada over a 10-year period to apply to the Governor’s Office of Economic Development for abatements of up to 100 percent of sales, real property and personal property taxes as well as a specified number of transferable tax credits. The abatements are for a specified period of time, 10 or 20 years, and because Nevada law doesn’t allow legislation to extend to only one company – say, Tesla – the City of North Las Vegas was able to create an 800-acre economic diversification district within its 7,000-acre Apex Industrial Park.

Apex is a new, not-so-new industrial park in North Las Vegas that went into private ownership in 2000. One tract, Mountain View, had sold to Kerr McGee back in the early 90s. The vast majority of the land sold to Apex Holding Company, a group of 20 investors. By 2005 they’d sold 4,000 or 5,000 acres of the property, retaining 4,000 acres which sold to a developer out of Utah, which then fell victim to the recession. Two or three years after the sale the property was foreclosed on and returned to the Apex investors, according to Lisa Cole, vice president, Land Development Associates.

Apex and Mountain View, with their 7,000 acres of developable land, could be a financial boon for North Las Vegas. But one of the tricky aspects is the semi-rural location north of Las Vegas, which makes getting utilities in place difficult and expensive. The Love’s Truck Stop located on the property at U.S. 93 and I-15, the second busiest Love’s in the country, has provided some answers to the water, power and access issues of the area, said Cole. In addition, with medical marijuana facilities locating at the park, partnering with other businesses like Delta Liquid Energy, a propane distributor locating at Apex, development is picking up.

Then enter SB1, designed for Tesla, applicable statewide to encourage business. Using the SB1-created tax abatement package, it was possible to create an economic diversification district on 800 acres. Reducing economic barriers to entry helps encourage businesses to locate at Apex and lowered costs in the economic diversification zone enables businesses to locate in the industrial park, and bring out utilities.

“These companies will spend over $3.5 billion in capital investment in our city within the next 10 years,” said North Las Vegas Mayor John Lee. “An economic analysis of two companies that are planning to open at Apex shows the projects could create more than 7,500 jobs and have approximately $13.7 billion in economic impact over 20 years.” An economic impact analysis done by Brookings Mountain West indicates Apex Industrial Park could create 116,000 direct and indirect jobs and have an approximate $192 billion economic impact.

As developers ramp up in the recovering economy, the challenge of working with governmental agencies for permits and utilities remains. Many agencies cut staff during the recession.

In some cases it’s business as usual, said Roberts, and in others it’s harder because there’s just not enough manpower. “It varies from city to county, etc., but I think it’s pretty much the same as it was back in 2006, 2007.”

“I’ve noticed in the last few months that a lot of organizations like SIOR and NAIOP are aware and concerned [about permitting and utilities agencies], because we’re only as good as long as the timing is good on these projects,” said Ramous. “A lot of the municipalities are using third-party agencies, and they’re planning on ramping their staff up in the foreseeable future. So it’s a concern, but so far so good as long as everybody stays on top of it.”

“You want the economy to stay stable. We’d like to see logistical growth of e-commerce distribution. That would enable our business to grow,” said Dermody. “We’d like interest rates to remain at predictable levels. Maybe not the lowest level ever, but predictable levels that we can understand.”

“We only build when there’s tenant demand, there’s only tenant demand if the economy is recovering. So, I think we have all the ingredients for a great year,” said Roberts.”