You are here: Home / Features / Cover Story / Medical Education: Preparing for the Future of Healthcare in Nevada 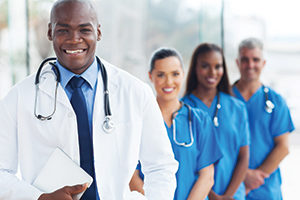 Medical education in Nevada is growing and is poised for significant expansion. Collectively, the current and proposed changes will eventually go far in reversing the state’s shortages of medical students, physician residency programs, doctors and nurses.

“I also think there’s a general sense that public medical education is just too small. It needs to be more thriving, more robust, with more research and have more influence on overall quality of care. We need to be a lot bigger.”

An ample supply of providers could transform the Silver State into a destination for healthcare. The state could become a place where, at a minimum, residents don’t have to go elsewhere for services. For many, this is the ultimate goal.

“A stronger physician workforce would have a huge impact on the quality of life in the state, the business climate and the attractiveness of the state to new businesses,” Schwenk added. “Businesses also benefit here in terms of higher-quality health, better healthcare, better access and, maybe, less employee turnover and lower worker’s compensation expenses.”

The state’s physician pipeline is weak, Schwenk noted. In 2013, about 900 Nevada students applied to UNSOM and only 60 of those were accepted. Similarly, the state graduates from 60 to 70 M.D.s (not doctors of osteopathic medicine, or D.O.s) per year when the average national size of a medical school class is 145.

In-state residency slots are few and offered only in about 14 of 24 key medical specialties, such as anesthesia, neurology and orthopedic surgery. For example, only 90 residencies are available each year for Touro University’s 135 graduating D.O.s, said CEO Shelley Berkley. Consequently, many physicians leave Nevada to pursue their residencies and, often, don’t return to the state to practice.

“We’re losing a huge number of our own students because they aren’t being trained here,” said Dr. Barbara Atkinson, planning dean of the University of Nevada, Las Vegas School of Medicine (UNLV SOM). “The state really should be training in all specialties.”

The Silver State needs significantly more primary care physicians and specialists. Clark County alone needs 2,060 additional physicians in all specialties to match the U.S. average number of physicians per 100,000 in population, according to the 2014 report, “Physician Workforce in Clark County Nevada.”

An acute need exists as well for nurses at all levels, but primarily ones with bachelor’s degrees along with ones specializing in areas such as critical care and mental health, said Bart Patterson, president of Nevada State College (NSC).

Currently, UNSOM students complete two years at the University of Nevada, Reno (UNR) then another two years at UNLV. Two proposed plans would eliminate that structure and expand medical education in Southern and Northern Nevada.

The first plan is the addition of a four-year public medical school—the UNLV School of Medicine—that’s entirely independent of UNSOM, accredited under UNLV and located at its Shadow Lane campus, Atkinson said. The concept is a full academic health center model, which would encompass medical education, research and clinical care. UNLV SOM has already developed partnerships with four area hospitals and begun the accreditation process.

“We’ll really be able to substantially increase the number of doctors over time here,” Atkinson said. “We’ll be able to build programs that can help doctors stay in Las Vegas.”

University of Nevada School of Medicine

UNSOM now has a statewide vision for how to expand, Schwenk said. Plans are to build out the UNR medical school program from two to four years; conduct more clinical research; collaborate with Reno’s Renown Health as its major academic platform and full teaching hospital; expand pediatric and neurology specialty services in the north; and work with Las Vegas’ MountainView Hospital to create additional residencies. MountainView plans to add 250 or more such programs in an array of primary care and specialty programs. This would double the available slots in Las Vegas and, ultimately, afford the state several physicians with a high likelihood of subsequently staying.

“We’re trying to help the state understand what it needs and then provide what it needs in terms of more of a pipeline of programs to expand the number of physicians and specialties,” Schwenk said.

Whether UNLV SOM and UNSOM’s plans come to fruition, however, greatly depend on their obtaining the necessary state funding. The Nevada System of Higher Education requested from the state $26.7 million to establish UNLV SOM, $5.09 million for UNSOM’s expansion, $9.9 million for residency and fellowship development; and a one-time funding of $4.3 million, according to the “2015-2017 Biennial Budget Request.”

“I expect [funding] will go through, but you never know. At worst it would slow us down, but it’s not going to make us go away,” Atkinson said, referring to UNLV SOM.

By 2030, the total economic impact of both state-supported medical schools would be about $1.9 billion (more than five times UNSOM’s current impact)—$1.2 billion from UNLV SOM and $685 million from UNSOM, according to the August 2014 report, “Economic Impact and Return on Investment to the State General Fund Related to Medical Education Expansion in Nevada.”

Two Henderson-based, private, not-for-profit universities are carrying out medical education expansion plans of their own.

Roseman is developing its College of Medicine in Summerlin and plans an inaugural class of 60 for the fall of 2017, said Dr. Mark Penn, founding dean. The school would offer medical education (M.D. degrees), provide continuing education for physicians and other healthcare providers, expand its current research and, eventually, as it grows, deliver patient care within the community.

“The board of trustees and leadership saw [a medical school] as a natural evolution for a health professions university,” Penn said. “People were talking about there being a need. We have the desire to provide comprehensive patient services.”

The project cost until full accreditation, an estimated seven years, is about $146 million. Funding would be multi-faceted and include existing monies, research grants, philanthropy, partnerships and eventually tuition and revenue from healthcare services.

Roseman is now working on accreditation, outfitting its acquired 184,000-square-foot building for students, hiring researchers and teachers, developing a curriculum and establishing clinical sites via partnerships.

“We will contribute to and help the healthcare here as we bring on faculty and staff,” Penn said. “Recruiting students from the state will be a high priority for us.”

In 2014, Touro launched its mobile clinic, which is staffed by supervised students and provides healthcare to populations with limited access, such as the homeless and seniors.

The university also expanded the size of its patient clinic, allowing it to double the capacity of patients seen, which includes an active aging center that offers medical care, occupational and physical therapy, a driving simulator and relevant educational programming. The expansion cost about $2.5 million, half paid by Touro and matched by the federal government.

“It’s been a tremendous help to the community because there is no medical clinic in this area of town,” Berkley said. “Our third- and fourth-year students have an opportunity to do their rotations right in our own medical clinic. It expands opportunities for our students to get the experience and training that they need.”

Touro has additional growth in the works. It includes adding a doctorate in psychology program, doubling the capacity of its autism program, expanding its physical therapy laboratory and building student affairs offices.

“Our mission is to teach, to serve and to lead,” Berkley said. “We provide services that are needed.”

Three major nursing schools in the state are enhancing their programs to help chip away at the supply and demand gap for nurses.

This four-year, Henderson public institution is fast tracking a gradual increase in the number of students it admits annually to its flagship program—nursing. Now at 96 students, by the end of the 2015-2016 year, it would accept 240 students, said Patterson. In the last class, NSC had to turn away 70 percent of the qualified applicants.

In the next year or two, the college plans to add academic and clinical education for two or four medical specialties, perhaps geriatric, critical or emergency.

“Turning out more bachelor-qualified nurses in the state is going to meet that state demand and help us reach additional care that the governor and the legislature are trying to reach,” Patterson said.

To accommodate the projected growth, NSC is building a 66,000-square-foot Nursing, Science and Education Building on campus, which is slated for completion in May of this year. A second facility—the Student Activities and Administration Building—is underway as well. The total cost for both, including construction, fixtures and furniture, is about $45 million, which the school’s revenues, primarily student fees, would fund.

The first DEU, which began in 2012, with Summerlin Hospital, unexpectedly led to the hospital agreeing to hire all the nursing students who’d completed three training semesters there while earning their bachelor’s degree. By summer 2015, the DEU program at Spring Valley will be running, meaning all of UNLV’s nursing undergrads will receive their medical and surgical clinical training under this model. Eventually, the plan is to extend the DEU concept to more specialties, such as maternity, pediatric, psychiatric or community health nursing.

The benefits of DEUs are that nursing students spend as much time at one clinical site as possible instead of training at up to four or more, thereby reducing the amount of time spent at facility orientations and learning different electronic medical records programs. It also modified the length of clinical shifts to 12 hours from six or eight. Students are more comfortable with the new arrangement. The on-site staff, each mentoring one to two students, can be committed to them and overall stress is reduced, Yucha said.

“All the hospitals want experienced nurses,” she added. “There’s a benefit in having a model that gets students out faster, employed here and not leaving.”

Meanwhile, UNR’s School of Nursing is expanding its RN-to-BSN program and doubling its undergraduate nursing class over time, Schwenk said. It recently launched a nurse practitioner-level master’s degree in mental health and plans to debut its physician assistant program in 2017.

The Regional Emergency Medical Services Authority, a Reno-based paramedic ambulance service, delivers medical education to healthcare providers and the public, continually adjusting its offerings based on need and interest. It likely will add new classes this year. Via all of its courses and its many Northern and Central Nevada sites, it trains more than 16,000 students a year, said JW Hodge, manager of education and community outreach.

“We’re making sure we’re providing high-quality education but with a frequency that actually can support the people in the community,” he added. “We pride ourselves on being very agile. If a class is getting too full, we’ll add another one.”
Students encompass medical professionals who need certain certifications—in CPR, first aid, advanced life support and more—for their work; local businesses wanting safety, first aid and other primers; and citizens looking to expand their medical knowledge. Further, REMSA provides all requisite education and training for basic EMTs and paramedics. In fact, about 60 to 70 percent of the company’s work force comes out of its programs.

“We offer a lot,” Hodge said. “We’re always looking to do more.”

With two major medical schools opening and expansion throughout the state, Nevada clearly will be working towards more medical students to serve the growing needs of healthcare in the state.