You are here: Home / Features / Building Nevada / The Office Market: Slow and Steady into the Future 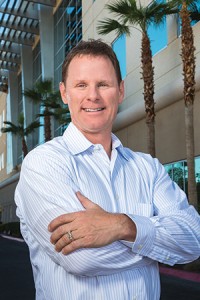 As a mixture of economic indicators appear to show the recession in our rear view mirrors, movers and shakers in Southern Nevada’s office market are cautiously planning ahead for slow and modest growth in the coming months.

“The trending is moderate growth overall due to a bettering economy,” says Lance Bradford, founder of Stable Development in Las Vegas. “There are specific areas for office growth, with the Southwest growing the most. Also, I see [growth in] Green Valley and Summerlin and a lot coming out of communities.”

Michael Dunn, market leader for the Las Vegas office of Cushman & Wakefield Commerce, says he’s also observing a generally upward movement in the market. “We’re on a slow path to recovery,” he says. “Occupancy can vary from quarter to quarter, but we’re seeing a slow whittle at it.”

In comparing 2010 to 2013, increases of 37.6 percent are seen in new home sales, 18.4 percent in taxable sales and 8.6 percent in gaming revenue, according to the Colliers International Third Quarter 2014 Report. A dip has been seen in new home sales so far in 2014, however. Likewise, both employment and unemployment figures indicate an improving economic situation, according to the Nevada Department of Employment, Training & Rehabilitation (DETR). With the needs of the office market firmly tethered to job creation, developers and real estate professionals religiously monitor employment figures to help them assess what future demands might be.

Recent numbers are somewhat encouraging with 25,700 jobs being added since July of last year. Of the total, about 5,800 were professional/business services, 5,700 trade/transportation/utilities, 5,300 education/health services and 3,500 leisure/hospitality. Construction jobs are also on the upswing, with 2,200 positions having been added.

When analyzed specifically for those jobs associated with professional office space, 2,600 healthcare jobs and 1,400 financial services positions were added between July 2013 and July 2014, in addition to the professional/business services jobs, for a total of 9,800 jobs that will directly impact the office market.

“Most of the vacancy is in poorly located places. The market has left and moved along the beltway. The true picture pulls out the less desirable locations,” he says.

Typical vacant properties include those that have suffered neglect and/or have been repossessed from their owners. Many are likely to remain unoccupied because they require investment in repairs, modernization and maintenance and also have the disadvantage of being located in areas that are not attractive to potential lenders.

On the bright side, however, not all vacant properties are this distressed and infill is gradually taking place in certain areas of the region. In addition, with the absence of new construction several projects that were shut down during the recession have been revived and will be rolling out the red carpet to new tenants. These include The Gramercy, which offers 200,000 square feet of Class A office and retail space and Tivoli Village that is looking to fill 70,000 square feet of Class A space in phase two of the project.

Although these numbers seem hopeful signs of economic recovery in some circles, to those who have dropped off the unemployment rolls and still don’t have jobs, it probably isn’t all that impressive. And even though most people acknowledge that the boom days of a decade ago are not apt to return any time soon, it’s useful to note that construction employment in Southern Nevada is still almost 70,000 below the peak in 2006.

Demands of the Market

The specific needs in the office market will follow the types of businesses coming to town, according to Dunn. “The demands will be the pockets related to job growth. A lot is back office space,” he says. Switch, for example, creates needs in the tech area. “We’re also still a service market here for legal, real estate, lending and construction.”

The changing needs of the medical community have had a noticeable impact on office space demands in Southern Nevada. “There is pretty strong growth in medical office due to Obamacare,” Bradford says. With 70 percent of Stable’s business related to medical needs, his company has been able to take advantage of this increasing demand. New technologies along with the consolidation of medical practices and the desire of physicians to be off campus, away from hospitals, has caused many healthcare workers to relocate to new space.

As a CPA, Bradford has been able to combine financial know-how with real estate in the 2005 formation of Stable Development. One of few developers that grew in the downturn, Bradford credits his success to a shared equity model.

In the model, tenants own 40 percent of the project, an arrangement that spreads the risk around. “Our model is created to help people. We forge great relationships with our tenants,” he says.

In addition, Bradford employs a pre-lease model which allows him to get a substantial amount of the leases signed before construction on a building begins. “We get the tenants and then we build,” he says. This allows for a more positive cash flow while giving a ten-year window during which the space is occupied. Having used these models since its founding, Stable Development has constructed 13 buildings which lease around 500,000 total square feet of space.

Bradford has also taken advantage of good timing. As the economy slowed and many projects were stopped in their tracks, he was able to get good deals by buying in tough times. With financing more difficult to obtain and spec deals nonexistent, these business models make sense for today’s times.

Much like Southern Nevada, the Greater Reno-Sparks office market has been responding positively to the improving economic conditions. Although statistics show ups and downs, the overall trend continues to be up.

“2013 was a big year and this year we’ll probably end up where we started. We’ve been playing catchup,” says Tim Ruffin, executive vice president and managing director for Colliers International in Reno. “The attitude in the community is positive and people are signing five-year leases instead of one-year.”

Major trends in the market show increased interest in the submarkets of Downtown and Meadowood, but less interest in South Meadows. “It’s struggling in South Meadows,” Ruffin says. The vacancy rate for all classes of office space in Meadowood dropped from 15.7 percent to 12.9 with a positive net absorption of 61,175 square feet. As tenants move to higher quality buildings in these neighborhoods, other submarkets suffer. The worst performing submarket was the Central/Airport market which saw an increase in its vacancy rate from 19.4 percent to 20.2.

Although improving conditions would seem to signal to developers that it’s time to break out the backhoes and begin new construction, landlords have been reluctant to do so since the returns would likely be low at this time.

“Rents are flat and they don’t warrant new construction,” Ruffin says. He expects them to continue this way at least until the end of the year. The Downtown submarket is further hampered by the necessity to build a parking structure along with a new building.

Sales so far this year lag behind those in 2013 with 43 properties being sold as of the end of August 2014 compared with 72 total sales in 2013. Ruffin does not expect sales in the fourth quarter to make up the difference between the two years because of low inventory. With fewer distressed properties on the market, prices are likely to inch up despite the fact that many prospective buyers are still looking for bargains.

As Tesla expedites construction of its five million square foot gigafactory in the Tahoe-Reno Industrial Center, the buzz in the Reno-Sparks area is how and when the impact will be felt on various sectors of the community. The residential real estate market is expected to feel the impact first, followed by the industrial and then the retail markets. The office market will be last, according to Ruffin, with influences being felt in several years as the project nears completion.

“The biggest worry [now] is that people will raise rental rates based on Tesla, but that’s a few years away on the office side,” Ruffin says. “The industrial brokers are very busy.”

Although a lot of office market activity in Nevada is a result of local businesses expanding and trading up, brokers still see a bright future in new businesses, such as Tesla and Ikea, migrating to the state. To stimulate continued growth, they say it’s critical to utilize the economic incentives and business-friendly environment that has served the state well in the past.

“We need to maintain the advantages we have vis-à-vis other states and we need to be cognizant of taxes and restrictions on business,” Bradford says. “When you’ve just come out of a serious recession you need to maximize the advantages that we have.”