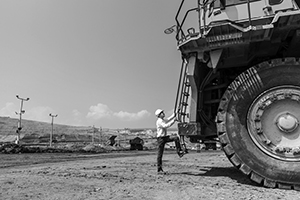 From lowering gold and silver prices to sage grouse habitat protection, Nevada’s mining companies today face challenges that hurt their bottom line. Yet, many continue to forge on, creatively tackling difficulties and working to advance projects.

“Different aspects of the industry are struggling, but our ability to be sustainable is greater now than ever because we’ve learned to be more efficient, to manage the highs and lows,” said Tim Crowley, recently retired president, Nevada Mining Association (NVMA), an organization that educates and lobbies for mining companies and related industries. (As of press time, the selection process was underway for Crowley’s successor.)

Mining suffered a 20.4 percent drop in gross domestic product (GDP) production between 2012 and 2013, the most recent years for which data was available. GDP decreased from $10.11 to $8.05 billion.

Along with gold, silver and copper, the roughly 125 miners operating in Nevada produce an array of metals and minerals, from barite to vanadium.

Nevada has a number of post-exploration, pre-production mining projects that are moving forward. From most to least advanced, they include:

The addition of Tesla Motor’s lithium ion battery gigafactory in Nevada will hugely affect mining, Crowley said. The sizable building itself will be constructed out of mined materials. Should Tesla use local suppliers for those, it will boost the local vendor base greatly. Tesla’s need for lithium will be a boon for the state’s two lithium companies—Western Lithium and Rockwood Holdings Inc., both of which are already producing. Also significant is the workers needed on the whole.

“Tesla will put a lot of pressure on our school system—from kindergarten to higher education—to produce engineers and a smart workforce,” Crowley added. “We’ll benefit from that as well.”

Another bright spot is the potential for mining rare earth elements in the Silver State—terbium, dysprosium, europium, ytterbium and more. An existing deposit in California near the Nevada border suggests those elements are present here.

“It’s likely that Nevada has some significant rare earths deposits. We may see them developed in the next decade,” said Dr. Jim Faulds, director of the Nevada Bureau of Mines and Geology (NBMG), a state geologist and professor at the University of Nevada, Reno (UNR). The NBMG is a public, statewide agency that conducts research, provides geological maps and publishes reports on mineral resources, engineering geology, environmental geology and hydrogeology.

Newmont, whose 50th anniversary in Nevada is in May, produces gold from nearly 20 mines located at three main in-state operations known as the Phoenix, Twin Creeks and Carlin operations. It also continues to explore for additional ore to mine.

“The key to our business is that whatever we produce in a year, we have to replace in order to keep going in the future,” said Jerry Pfarr, Newmont’s vice president of sustainability and external relations.

For its Long Canyon project in northeast Nevada, the company continues to work through the permitting process, which can take up to 10 years in some cases. It expects a Bureau of Land Management (BLM) record of decision in late 2014 or early 2015.

“We’re very excited about it,” Pfarr said. “It has good potential growth. We’ll just keep exploring out there and trying to get something started.”
Another major project underway is construction of a ventilation shaft at Carlin, which will allow for deeper mining. It’s targeted for completion late in 2015.

Barrick, operating in Nevada since 1987, boasts six producing mines in Nevada—Bald Mountain, Cortez, Goldstrike, Round Mountain, Ruby Hill and Turquoise Ridge. It’s also doing extensive exploration. The 2014 budget for exploration was $200 to $240 million. Its primary targets are Goldrush and Spring Valley, both on schedule for pre-feasibility study completion in 2015.

One big change for the company has been the reorganization of the management structure, seating two co-presidents rather than one CEO and eliminating regional business entities.

A $500 million capital project at Goldstrike is modifying a processing facility to use new technology to recover more ounces. It’s slated for commissioning in the first half of 2015.

Production at Barrick’s Erturo mine, a joint venture with Goldcorp Inc., is scheduled to start in the first quarter of next year.

“These days it’s fairly unusual to see a new mine come into production,” Bolland said. “We have quite a list of other projects that will be going through pre-feasibility or feasibility next year.”

Lower commodity prices like that of gold, which fell more than 35 percent since the 2011 peak, are impacting miners. For some, it’s no longer economically viable to operate at the lower prices (gold was $1,177 an ounce and silver, $16/ounce, in early November). While the major producers may be able to maneuver in order to cope—halt some production, sell assets, cut costs—the smaller producers and explorers oftentimes can’t.

“If you only have a single asset and may or may not be producing, it’s pretty hard to survive the low gold price cycle,” Bolland said.

Furthermore, miners’ costs have risen, those of fuel, machinery, equipment maintenance and labor in particular.

To deal with the greater expenses and lower income, Barrick, for instance, sold some assets, including its 33.3 percent interest in the Marigold gold mine in Nevada. It also has determined and effected ways to optimize performance at every mine—to produce greater amounts of gold more cheaply.

Similarly, Newmont’s employees, are incentivized to assess operations and dream up more efficient methods. For example, for a half a million cost savings, the company constructed its Milk of Lime facility to raise the pH of the solution coming from the leach pad, which had been lower than optimal and preventing recovery of additional ounces. Year to date, those employee efforts have recouped $337 million.

With the low gold and silver prices, companies must carefully monitor cash outflow and capital can be constrained. In taking a project from exploration to production, miners burn a lot of cash.

“You have no idea what the market will look like when you get there,” Bolland said.

These days, explorers needing to borrow money are coming up empty handed. Again, this is more problematic for companies without producing mines, as they don’t generate revenue and all of their capital is borrowed.

“The risk is tremendous, and the costs are tremendous,” Crowley said. “When the price of gold drops, you have fewer people willing to take that risk. The exploration business has really dried up.”

To drill one hole, a company can spend between $10 and $100 thousand depending on geology and technology. Proving up a body of ore often requires $5 to $10 million.

Preservation of sage grouse habitats, is another issue for miners. Government agencies are working on the best way to achieve that. The state, with input from the mining industry, developed a plan for mitigating the bird’s destruction. The next step is for the U.S. Fish & Wildlife Service to weigh in on its proposal.

“There are changes that are going to have to be made,” Crowley said.

Ultimately, preservation efforts will likely impact miners’ access to Nevada’s land, both for exploration and production.

“Miners are really expert at mitigating issues and finding a way to solve problems, whether it’s with wildlife or the environment once they’re operating. But, they need access to find the minerals. That’s an immediate concern of ours,” Crowley said.

The sage grouse issue has affected Newmont’s permitting for Long Canyon, Pfarr said. Already, the company has set aside some land on which it’s growing sagebrush to reverse some of the habitat loss.

The mining industry encompasses a slew of jobs/careers from equipment operators to geotechnical engineers. Ensuring a capable skilled and professional workforce for years to come is a priority. The NVMA, Barrick, Newmont and others are all investing money, time and expertise in educating the public, especially youths, about mining employment opportunities. They inform teachers who pass on that knowledge to their students. They also train individuals in-house for skilled positions such as diesel mechanics and electricians. Reno’s Bishop Manogue Catholic High School initiated an informational program about mining and related career paths. The Clark County School District is considering incorporating mining lesson plans and internships into curriculum.

“Workforce development is a big deal for us,” Crowley said. “We need people who are going to go through the engineering schools at UNR or UNLV and come onto our mine sites trained.”

“All students here in all majors are required to do undergraduate research. Typically in science, they do a year-long undergraduate project working with faculty,” said Lynn Gillette, SNC’s president.

“It’s important that we remind people that we’re mining because of demand, not for fun,” Crowley said. “If they want to build a home, have a car and build wealth, it starts somewhere.”