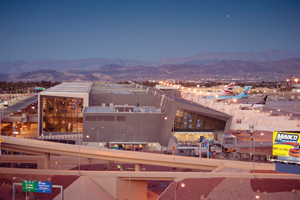 When Tina Quigley became general manager of the Regional Transportation Commission of Southern Nevada (RTC) she and her team went promptly to talk with officials in metropolitan areas where they’ve created transportation plans that were both funded and built, and had community support behind them.

Called the Transportation Investment Business Plan, the group is connecting the dots between economic development and transportation, and working in the central business district/downtown core in Las Vegas, addressing long-term needs for all the constituents involved.

The collaboration puts everyone on the same page, Quigley said. By working together, things get done. For example, during the 2013 State Legislature AB413 passed with bipartisan support, allowing counties to tie motor vehicle fuel taxes to inflation. This allowed RTC to bond for $700 million worth of projects, a line item list of 199 projects in Southern Nevada that otherwise wouldn’t get funded, and created thousands of construction jobs.

Post-recession, the federal government isn’t going to come to the rescue with transportation dollars. “They’re not going to say, ‘Here, Las Vegas, is $3 billion for you to create a transportation system that more efficiently connects your airport to your resorts to your convention center to your University and downtown,” said Quigley. Instead, agencies need to create convincing arguments for why funding should be awarded.

Collaboration is needed because, tempting as it might be to draw a straight line between two points, invest the funds and build the roads along those shortest distances, there’s more to it than that. There’s a relationship between land use and economic development. With funding so challenging, every dollar needs to work, which requires conversation among those knowledgeable about land use, economic development and economic trends in Southern Nevada. Doing so can help attract new business. When business owners look to relocate, they ask about education first and transportation second: Can they get their employees to work and their product to market efficiently?

The Shared Federal Framework goes beyond transportation projects and the need for economic development. Partners identified areas of mutual interest and put together a document of priorities that includes transportation, energy and the environment, public safety, federal lands, health and human services, and education to present to the region’s congressional lawmakers.
Rudy Malfabon, director, Nevada Department of Transportation (NDOT) said NDOT leaders stay in contact with all the economic development groups and transportation collaborations.

NDOT works closely with the Governor’s Office on Economic Development (GOED) on referrals for businesses, and had a table at the recent conference on small businesses. Plans are in the works to improve rest areas in rural areas to include visitor information and recreational opportunities nearby.

One RTC project that’s already broken ground in Southern Nevada involves bridges on I-215 in the north, bringing the road up to freeway standards. Slowed during the economic downturn, it’s an important project for people traveling from home to work and back again.

RTC South and NDOT are working together on I-11, the Boulder City Bypass. RTC’s responsibility extends for 12 miles of the current phase and NDOT’s responsible for the other three miles; NDOT is currently in the procurement process for phase two. The project will add 15 miles of new freeway circling the perimeter of Boulder City, and its final route isn’t determined. With Tesla slated to come into Tahoe-Reno Industrial Center (TRIC), there’s talk of taking the new road up North, or taking it through into Arizona.

NDOT is also engaged in Project NEON, which will widen I-15, and the Charleston Interchange, a half-million dollar project. In Northern Nevada a proposed extension of USA Parkway would connect it with U.S. 50 in Lyon County.

In Northern Nevada, RTC is in the process of developing projects, programs and services for the new Tesla plant going out on I-80; RTC is looking at public transportation systems, park and ride sites to allow commuter buses to the plant, working with local communities to create a transportation system and with NDOT to ensure I-80 functions appropriately. Tesla will bring substantial change in freight logistics and freight volume on I-80, said Gibson.

RTC’s Gateway project will connect University of Nevada, Reno, with downtown and MidTown Reno, creating an enticing environment for high tech company employees. The project is a response to Nevada’s selection as one of the Federal Aviation Administration’s six states for unmanned aerial vehicle (drone) testing. While Tesla should bring 6,500 jobs to the I-80 industrial corridor, drone testing should bring in small startup companies whose employees want an urban lifestyle.

Substantial improvements are underway on Southeast McCarran, funded by a $21 million contract, and the 4th Street and Prater bus route is a multi modal project that includes rolling out Proterra Electric Buses. The 4th Street/Prater corridor is a burgeoning “industrial arts” center, as Gibson calls it; major creative endeavors centered on the Burning Man are designed and created there.

Throughout the state, NDOT is landscaping freeway ramps to improve air and water quality, help reduce the impact of flooding and create a positive impression on visitors. While some residents object to the expense, the funds are specific to highways.

Today’s funding for transportation projects comes from competitive federal grants and motor vehicle fuel taxes. TIGER Grants allow agencies to pursue projects. RTC South won a TIGER grant for the Flamingo Road corridor to improve amenities for all modes of transportation. Las Vegas was one of 40 cities out of 500 applicants to be awarded.

NDOT funding hasn’t changed much, but Malfabon said Congress needs to act on long-term transportation funding for the nation, not just Nevada. The federal gas tax revenue is not sufficient for state spending levels which are on the rise across the nation. “So it’s, ‘Let’s live within our means, we’re only bringing in this much money so you can only spend this much money.’ That would be a 30 percent cut to our state,” said Malfabon.

Money doesn’t just flow into transportation agencies. Every project funded creates construction jobs. “The economic impact is six to one,” said Quigley. “For every dollar invested in actual infrastructure itself you see a six dollar return; you have an increased opportunity for economic growth and economic investment and for the quality of life overall.”

Reno-Tahoe International Airport (RTIA) recently completed five years of construction that ended with the Gateway Project, a 17-month, $27 million project that employed 275 construction workers. Gateway created a single state-of-the-art security checkpoint on the first floor of the airport and shopping and dining on the second, beyond the checkpoint.

The airport’s stated five strategic priorities include maintaining and increasing air service, optimizing general aviation opportunities and economic development at both airports, which really means developing land owned by the airport. The Reno Stead Airport is a 5,000-acre airport with 3,500 acres available for development. RTIA currently is seeking a developer. Other priorities include cargo development and providing a good experience for the traveling public.

Toward that last priority the airport works closely with RTC Washoe on projects close to the airport, like widening the entrance road and coordinating traffic signals and extending the road along the south end of the airport to support future cargo growth.

The airport also partners to support ground transportation for visitors. “Not everybody that comes into our market rents a car,” said Marily Mora, executive director, RTIA. “So we work not only with transportation in the Reno-Sparks area but we also work with Lake Tahoe in terms of public transportation or transportation up to the Lake.” Approximately 25 to 30 percent of passengers moving through Reno’s airport are headed for Lake Tahoe.

Growing air service is the first priority, and like many airports of the same size, RTIA is rebuilding after the economic downturn and works with Economic Development Authority of Western Nevada (EDAWN), GOED, TRIC and LVGEA. The Reno Stead Airport was named one of the sites for drone testing. “It’s not just about testing this new technology but about bringing these companies into our state and, in our case, bringing those companies into Northern Nevada,” said Mora.

“We would not have had the capacity or the flexibility if we didn’t have that terminal,” said Rosemary Vassiliadis, director of aviation. “It’s not just the terminal. It’s the flexibility, the ramp space, everything that goes into the operations an airline has to look at.” Airlines take into account how far they have to taxi, whether they can stay at a gate or have to push back, what their bottom line is when flying into an airport. Domestic flights have grown 2.5 percent and international has grown 31 percent.

T3 also affected Nevada’s economy during the depths of the recession. Design and some civil work had been done, but hard construction started in 2009. “We decided to go forward and are pleased we were able to add jobs during those hard times,” said Vassiliadis. The economic boost continues with the personnel necessary to run T3 operations, valet service, retail and food court businesses.

Planned construction for McCarran includes a $35 million project to rehab the longest runway. Due for rehab in a few years, the decision to start it in 2014 was made when the FAA awarded McCarran a grant covering most of the costs. The construction will create 200 jobs and the project will span two years.

McCarran leaders are involved in the Transportation Investment Business Plan collaborative. Vassiliadis, who’s worked in city and county government for 28 years, said, “It’s the first time we’ve all been at the table and discussing the needs of each of us, what we all need in a perfect world, and then coming to a collaborative plan. What I’m looking for is, what’s the community going to invest in? What mode of transportation and how does that fit at the airport?”

“All the stakeholders need to work together to come up with a coordinated system that works efficiently for everyone, because those transportation dollars are tough to come by anymore and the federal government is not coming to our rescue,” said Quigley. “So every dollar we can secure has to be invested wisely to grow and diversity our entire economy.”