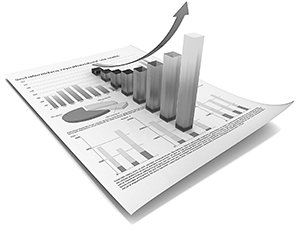 The “third” estimate for second quarter 2014 shows U.S. real gross domestic product increasing at an annualized rate of 4.6 percent, slightly higher than the 4.2 percent growth reported in the “second” estimate. The revision was due to the increases in nonresident fixed investment and exports being larger than previously estimated. U.S. nonfarm employment experienced robust gains in September, adding 248,000 jobs over August. The unemployment rate fell from 6.1 percent to 5.9 percent. Housing starts were up substantially year-over-year, and housing prices experienced a slight increase.

The Nevada economy evidenced mostly positive signals with the most recent data. Seasonally adjusted, statewide employment increased by 300 jobs from July to August, and it was up 3.5 percent year-over-year. The Nevada unemployment rate fell from 7.7 percent to 7.6 percent. Taxable sales continued to show year-over-year growth, up 6.3 percent. Total air passengers were up 1.8 percent over the same time period. Gaming revenue, however, experienced losses for the month and was down 3.7 percent from August 2013.

For Clark County, seasonally adjusted employment rose from July to August by 2,700 jobs and was up 2.9 percent year-over-year. The Las Vegas unemployment rate fell from 7.7 percent to 7.4 percent. Total passengers at McCarran Airport were up 3.4 percent from a year earlier. August visitor volume was up 4.9 percent from a year ago. Gaming revenue was 8.8 percent lower than in August 2013, the result of an decrease in baccarat play. Clark County’s taxable sales for July were 8.8 percent above those of a year earlier. Residential construction permits decreased from July to August. Commercial construction permits remained at a low level.

The most recent data show mixed signals for Washoe County. Seasonally adjusted, Reno-Sparks’ employment experienced a decrease from July to August by 900 jobs. Total employment is up over a year ago, by 2.1 percent. The seasonally adjusted Reno-Sparks unemployment rate fell from 7.2 percent to 7.0 percent, the result of a shrinking labor force. Compared to a year earlier, August visitor volume was up 1.2 percent. Total air passengers were down 0.3 percent from July 2013. Gaming revenues for August were down 1.9 percent from a year earlier. Residential construction decreased from July to August, while commercial construction permits remained low.