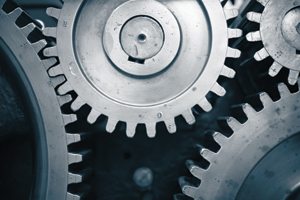 In large part, it’s the people that make the organization successful. “NAIOP provides a very professional level of like-minded business people in and around the real estate world,” said Mike Mixer who serves on the NAIOP board of directors. Membership also includes companies and service providers involved in the development process from across the commercial real estate spectrum. “NAIOP is the glue that brings highly experienced and motivated people together to conduct more business. It’s really a one of a kind organization here in Las Vegas,” Mixer added.

“I got a call recently from an engineer out of Cedar City, Utah, who said he was thinking of opening up an office in the Las Vegas area and wanted to know how he could meet people and find business,” said Mike Montandon, chapter president. Montandon suggested the monthly NAIOP meeting. The engineer attended and, afterwards, “He came up to me and said, ‘wow, that just accomplished a month’s worth of new business development, people it would have taken me a month just to find out who they were, contact and meet them.’”

“NAIOP facilitates introductions and provides access to people who conduct business in various facets that are meaningful to our business in terms of transactions. The organization provides a more efficient way of connecting the right people in the right situations,” said Mixer.

NAIOP gives everybody a seat at the table and allows the leaders of the Southern Nevada’s commercial real estate industry the opportunity to work together. “When you pool together 80 percent of the top developers in Southern Nevada, you have a strong, healthy voice,” said Charles Van Geel, chapter president-elect. “We play a role to advance responsible commercial real estate development, and we’re also an advocate for effective public policy.”

While many trade organizations promise to provide networking opportunities and bring people together, NAIOP has been successfully delivering on that promise since 1986.

“The time for going to a function and exchanging business cards with people has passed,” said Bridget Richards, education chair. “We’re building long-term relationships with people and NAIOP is one of the few organizations where you really see that.”

One hypothetical example: a NAIOP member who is a developer intends to buy a piece of land and build an office building. So a NAIOP broker conducts a search for suitable locations. The property is purchased, and a NAIOP member title company handles title and escrow. A NAIOP architect designs the building, a contractor who’s a member builds it and maybe NAIOP members outfit the building before tenants, who might also be members, move in. “NAIOP works for all these people in various ways, with all the different members involved in one single transaction,” said Mixer.

“This is a close knit community, so we find ourselves interacting with each other either on a deal by deal or building by building basis,” said Van Geel. “American Nevada purposefully does business with NAIOP members; the general contractors that build our buildings, shopping centers, medical buildings and so on, I’d say in almost every single case that general contractor was also a NAIOP member, and the architect who designed that building was also a NAIOP member.”

An essential part of NAIOP and one of the most beneficial committees for membership, the government affairs committee, provides the organization with access to Nevada’s legislative leadership.

“It’s a huge commitment and benefit of NAIOP,” said Montandon. While large companies like NV Energy have their own government affairs department, most companies don’t even have a budget for it. Montandon added that the “government affairs group spends a lot of time getting the policy makers in front of NAIOP members but also gets NAIOP in front of policy makers. When the City of Las Vegas decides it’s time to revamp a section of building code, the first call they make is to NAIOP. They sit down with us and say, ‘We want to make sure we’ve contacted the industry and you’re the industry, so we make that contact through you.’”

The government affairs committee is at the forefront of state legislative sessions, advocating legislation to help members continue to be successful. “It’s essential that we have the ability to ensure good legislation gets passed to help keep a healthy industry,” said Sallie Doebler, government affairs committee co-chair and president of Business Source Nevada. “It’s imperative that our developers are successful in their projects. That contributes to the health of our economy and community. Essentially we are the voice of legislation in our industry and in the State of Nevada.”

As chair of the education committee, Richards is responsible for hosting the “lunch and learn” workshops as well as the several continuing education events, usually six or seven events annually. Educational lunches with professionals in different sectors of the commercial real estate industry allow members to ask questions and understand that particular sector, which leads them to a better understanding of both the market as a whole and individual disciplines.

“We want to provide a deeper understanding of what’s going on in the industry,” said Richards, who, as a broker, interacts with a variety of professionals in different disciplines. “If I’m faced with construction issues, with planning issues, if I already understand what’s happening with the building codes, I’m in a better position to advise my clients. If I’m in the know on current changes to legislation or building codes, I can better inform my clients and appear more expert because I’m informed.” It’s the sharing of information that gives NAIOP members an edge in the business.

“As a result of participating on this committee, I’ve put together business as a result of more intimate dealings with my committee members,” said Richards. Monthly committee meetings allow members to get to know each other and those relationships lead to business.

An off-shoot of the education committee, the Developing Leaders Institute (DLI) is working to provide education and experience for young real estate professionals.

Jennifer Turchin, DLI committee chair, became involved with NAIOP through the DLI program. Trained as an architect, she’s not a broker or developer as many in commercial real estate are. “I definitely have a much broader network than I would if I’d stayed in the traditional architectural organizations,” said Turchin.

The DLI program takes 25 members who are 35 and younger through a year-long class that includes following a theoretical development project from start to finish. “When it’s over, they present to what we call the Development Dudes, typically made up of NAIOP board members and longstanding members. It’s an opportunity for everybody to work all the way through a project,” said Turchin.

“I went through the DLI program and I still work with people from my group on a day to day basis. They comprise my core relationship network,” Turchin added.

One of the ways NAIOP works towards the success of their members is by getting them involved with other professionals in the real estate community. Participating in committees allows members to meet monthly, getting to know each other as they complete committee tasks. The programs committee is tasked with putting on the monthly programs. Working to create the most timely programs means committee members easily stay abreast of current developments within the Southern Nevada commercial real estate community.

“From that comes a greater source of business-people I can refer my clients to,” said Dana Berggren, programs committee chair. “People who put in the work to benefit the commercial real estate organization in Southern Nevada will benefit from referrals and stronger relationships within the commercial real estate community.” Berggren was recently elected to the NAIOP board of directors.

“NAIOP made a difference for me in 2009 and 2010 when I joined the Developing Leaders Institute,” said Matthew Hoyt, membership chair and an associate with CommCap Advisors. The opportunity to interact with instructors and meet the best of the best in Southern Nevada’s commercial real estate industry gave Hoyt the opportunity to develop relationships in the business. “I’d say over half the business I have today comes from attending the Developing Leaders Institute.”

“We want to provide every NAIOP member the best value for their dollar, and a lot of that is making existing members aware of what they can do to maximize their membership,” said Hoyt. Maximizing membership can mean anything from joining a committee to attending networking events. For Hoyt, membership means being part of an organization that backs his interests as a commercial real estate professional, and a foundation for expanding a network of clients and service providers.

Communications Chair Brandon Wiegand is working to create a website that can distill commercial real estate news in Southern Nevada so rather than searching through multiple publications, members will have the most current industry information readily available. When not working to keep NAIOP talking, Wiegand is the executive vice president of acquisitions and sales for Focus Commercial Group.

Wiegand is also bringing together various committees to maximize experiences so that development projects and lunch meeting topics and programs come together on the same theme or industry, each enhancing the other.

Communications is also about getting the word out outside the organization. “When I talk to folks about being engaged in the membership, there are a multitude of reasons, from the educational aspect to the government affairs lobbying to giving a voice to the industry,” said Wiegand.

NAIOP Works for the Community

Giving back is important to NAIOP members and they show their compassion through their efforts on behalf of the community. In 2007 the Southern Nevada NAIOP chapter formed the civic and community services committee to honor Casey Jones, a former chapter president. “The NAIOP Casey Jones fund, a component fund of the Henderson Community Foundation, provides an opportunity for the organization to give back to the community whether in time and talent or in fund-raising activities,” said Matt Cook, community service committee chair. Cook isn’t directly involved in commercial real estate; he works for Cragin & Pike Insurance | Risk Management | Surety in risk management, and joined NAIOP as a way to network with industry leaders.

The chapter serves a number of different nonprofit agencies. The organization built a 1,200-square foot clinic at Elaine Wynn Elementary School with donated time, talent, money and construction materials; anyone in that school district can access care there. The clinic is now operated by Positively Kids. There’s also an annual fund-raiser for Helping Hands of Vegas Valley and its annual food drive. In addition, NAIOP supports Street Teens, an organization that helps homeless teenagers in Southern Nevada.