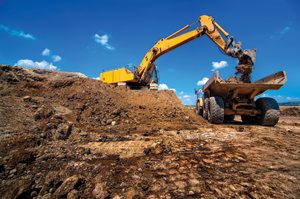 Demand for land in Nevada has resembled a rollercoaster pattern this decade. During the real estate boom in the first half of the 2000s, both residential and commercial developers hungrily purchased land, driving up prices. With the recession, the opposite happened; development nearly ceased, land demand decreased and so did the price.

Again, the pendulum has begun to swing in the other direction as the post-recession restart of residential construction has heated up the state’s land market.

“The land market has been in recovery since 2010, and homebuilders have been driving that,” said Bill Lenhart, managing partner of Sunbelt Development & Realty Partners LLC, a real estate brokerage company specializing in land.

Nevada is a state whose land is primarily owned by the federal government—87 percent, in fact. The state itself owns less than 1 percent of its land; about 12 percent is privately owned, according to the Nevada Division of State Lands (NDSL). This agency provides land and land use planning services to the state, its agencies and its people. For instance, it secures, disposes, leases and authorizes use of state land. Of the Silver State’s state-owned land, most consists of wildlife management areas (158,345 acres), parks (120,471 acres) and prisons (6,692 acres), said Charles Donohue, NDSL’s acting administrator. Other Nevada-owned sites include 500 Lake Tahoe lots managed as conservation areas, parcels housing state facilities and undeveloped and/or vacant properties that the NDSL plans to hold until land prices rise.

The NDSL can sell state-owned land to private parties but must follow a specific statute-mandated process in doing so, which includes a public auction.

“Once we explain how we have to dispose of land, people usually aren’t interested in working with us,” Donohue said.

In 2013, Governor Brian Sandoval signed AB227, which created the Nevada Land Management Task Force to conduct a study addressing the transfer of certain public land in the state. The Nevada Association of Counties (NACO), a nonprofit organization comprised of Nevada’s county government officials, has led an effort to get at least 7.2 million acres of federally owned land in Nevada transferred to state or local government control. In its document, A Report of the Nevada Land Management Task Force to the Nevada Interim Legislative Committee on Public Lands: Congressional Transfer of Public Lands to the State of Nevada, the task force recommended that the Nevada Legislature’s Public Lands Committee request a draft of a bill in the 2015 session that proposes such a transaction.

“The state has taken a position that we’re supportive of the initiative,” Donohue said, adding NDSL has been in discussions with NACO about which federally owned land strategically makes sense to regain control of, such as parcels along the Interstate 80 corridor in Northern Nevada where current ownership, some state and some federal, resembles a checkerboard pattern.

Land Scenario in the South

Today, in Southern Nevada, land demand exists for all uses—residential, commercial and industrial, said John Restrepo, founder and principal of RCG Economics, a Las Vegas-based source of research and market trend analysis. Residential developers, however, have been the most active buyers.

“The economy is starting to grow again,” he said. “It has created a certain amount of momentum for people to buy houses again, new and resale, and builders to build again and to start buying land.”

However, according to Lenhart, homebuilders remain active and will pay for high-demand sites that:

Commercial development, which tends to pick up after residential has, is also on the rise.

“We have seen an increase in commercial land sales, which is what you’d expect in this phase of the market cycle,” Lenhart said. “We’re seeing a lot of small developments and end users positioning throughout the Valley.”

In preferred locations in the Vegas bowl, though, land prices have gotten too high for industrial developers, resulting in a shortage of certain, larger-sized industrial buildings, Restrepo said.

Within the valley, in the short term, land is available for residential development, Stuart said. Longer term, though, a shortage is possible, particularly if annual housing demand hits the mid- to high-teens. In 2013, about 7,000 new homes were built; this year, about 6,000 are estimated. An average of 50,000 new homes built over the next five years will use about 10,000 acres.

“When you look at a map of the valley, we start to run out of land pretty quickly once that amount of acreage is absorbed,” Stuart said.

As far as land for commercial development, well-located land packages with good topographic features and infrastructure in place are limited, Restrepo said.

A major problem for residential and commercial developers is that many parcels lack the critical mass needed to achieve a scale that makes a project economically viable, Lenhart said. Additionally, for homebuilders, it’s difficult to get large sites that are zoned, approved and ready for construction except for in a few master plans, Stuart said.

As a possible workaround, investors or home builders may buy and assemble adjacent properties one by one or brokers may organize various owners to sell their properties as one, said Lenhart, whose firm provides this through its multiple property alliance service.

Another solution is for the U.S. Bureau of Land Management (BLM), which owns sites within the valley, to release more public land for development. Public land encompasses national parks, forests, wildlife refuges, monuments, wilderness areas and other BLM-managed land. Most of its parcels, though, are small and scattered, Restrepo said. The BLM typically auctions land one or more times per year.

All land surrounding the Valley is federally owned and, therefore, unavailable. Further, were the BLM to release any of it, it would be expensive to develop as all infrastructure would need to be extended to it, said Lenhart.

“Historically, Clark County has been a relatively supply-constrained market and we’ve always had a little bit of a land shortage or relatively higher land prices than some of our competing cities,” Restrepo said. “It does pose some challenges for us in terms of growth five to 10 years from now. How do we have sustainable economic growth in Southern Nevada?”

Experts predict job growth in Southern Nevada over the next few years, which should increase housing demand and, therefore, land demand. A proposed Asian-themed resort on the Las Vegas Strip, Resorts World Las Vegas alone should create 12,000 jobs. Prices, however, for residential acreage likely will remain flat for the next 12 months, but land sales volume should increase slowly.

All of this has positively affected land sales and prices. Land prices increased in excess of 30 percent in 2013 and, so far in 2014, have risen about 11 to 12 percent.

“Builders are more bullish on the market, so we’re getting some more aggressive buys as we go forward,” Krueger added. “We’re finally starting to build on land values but have a ways to go before some of these sites are economically feasible.”

Based on the current demand for about 1,100 to 1,200 new homes per year, Northern Nevada has ample property on paper. However, when it comes to entitled land, there’s only a little over a year’s supply, most of which builders already have acquired. Most of those ready-to-build sites are in southeast Reno and Spanish Springs.

Because the rest of available land isn’t immediately ready for development, buying parcels of it currently doesn’t make sense economically. About 2,600 final map lots are recorded but still need streets. About 9,000 to 9,500 lots have tentative maps, which need final maps and improvements.

“We are going to continue ramping up home sales, so we will start eating into that faster as we go into the future,” Krueger said.

Commercial development tends to recover after residential does except for industrial, which tends to be a job generator for housing. The industrial sector, which has been solid, is getting stronger, so developers of these products are buying land. In terms of retail and office spaces, vacancies are dropping but new building and, therefore, land sales for these uses, aren’t happening yet.

A major constraint on the land market is the lack of existing services, especially water and sewer, at sites of planned future developments outside of the Reno-Sparks-Carson City bowl. At this time, it’s not economically feasible to extend existing infrastructure.

Also, because brokers are back to selling builders raw land, or land on paper, today’s deals contain more contingencies, are taking longer and are more challenging to complete, in general.

“Builders are having to go out, look at paper lots and somehow figure out how to get the manpower and financing to construct the lots before they build the homes,” Krueger said.

Positive job growth is expected throughout the state. The remainder of 2014 and 2015 should experience an increase in new home construction and overall home sales, which equates to continued improvement in the land market.

“We will have some good population growth here and immigration of people from Northern California, which will continue to feed our market,” Krueger said. “All of that is going to result in some good strong housing demand.”