You are here: Home / Features / Special Reports / Elko Catches Up to Growth 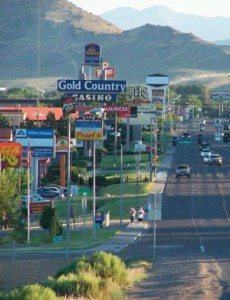 While the rest of Nevada suffered the dramatic 2007 economic downturn and aftermath, the Greater Elko region boomed, primarily due to bustling mining operations resulting from a high gold price. In fact, over the last decade, the population there has burgeoned. The City of Elko alone went from about 10,000 to 20,000, with the broader Elko area home to about 30,000.

Consequently, Elko has outgrown many of its facilities. In some cases, a significant deficiency exists, such as industrial land and buildings, convention space, parks and hotel rooms. Various agencies are addressing those gaps but having to do so in the pre-boom-like economy Elko now is experiencing.

The Elko Convention & Visitors Authority (ECVA) is in the due diligence phase of plans to expand its current building to 40,000 square feet as it can’t accommodate all demands for conference/meeting space, said Don Newman, the executive director. The new facility, about a $12- to $15-million project, would increase capacity from 250 to 1,000 people. The project is projected to be complete by late 2015 or early 2016.

“It will give us space that is desperately needed in the community,” Newman said. “We have run out of space and there’s not enough between us, the hotels and other areas in community.”

As additional lodging, too, is needed, the city is reviewing proposals for three hotel projects, either new ones or expansions, Newman said.

As for other projects, the bid for construction of a new, approximately $6 million police station was due in July, Johnson said. The city has about $3 million banked already for that. Also, it’s committed $1.6 million for a water line extension to the area of the 298 interchange with Interstate 80, west of Elko, which would allow for desperately needed industrial building parcels there. A third project in development is a $15 million sports complex with six fields for locals and traveling teams.

“Elko is busting at the seams for park area,” Johnson said. “The park area versus the population is low.”

Noteworthy private enterprise news includes Noble Energy Inc. having begun exploration drilling for oil along a property swath that runs north and south through Elko County and includes Jiggs and Wells, said Pam Borda, the executive director of the Northeastern Nevada Regional Development Authority (NNRDA), which covers Elko, Elko County, Carlin, Wells and West Wendover. Should Noble eventually produce oil in the region, it could greatly impact the county and the state. For one, it would translate into greater growth for the region because it supplies many of the workers for mines and the like.

“That would mean more jobs and more economic activity. There’s a multiplier that comes with each oil job that would create a vendor base and more small businesses. There’s also certainly a tax implication because oil pays the net proceeds of minerals tax, like mineral miners and geothermal do. Both local and state governments would benefit from increased taxes,” said Tim Crowley, the president of the Nevada Mining Association, which encompasses mining, geothermal and oil and gas enterprises.

“If the gold mines shut down tomorrow, we could close our doors,” she added. “Literally, it would be that serious. We are at this point in time very, very dependent on those gold mines.”

Nevada as a whole also gains significantly from mining in Greater Elko. It receives the net proceeds of minerals tax, one of its biggest revenue sources, and a portion of the region’s sales tax. Further, mining affects about 1,200 businesses throughout the Silver State, which provide services, supplies and equipment for the industry in and around Elko.

A number of new mines or expansions of existing operations are planned in Northeastern Nevada, all of which could benefit Elko. Newmont Mining Corp. is in the permitting phase with its Long Canyon deposit in Elko County. It’s slated to come online sometime in 2015 or 2016.

“That’s going to be a big one for Elko,” Johnson said.

Barrick Gold Corp. is exploring its Goldrush discovery and advancing toward production on its Cortez Hills mine, both in Lander County. Nevada Copper Inc.’s Pumpkin Hollow project in Yerington is in development. Midway Gold Corp. is developing its Gold Rock gold mine in White Pine County. General Moly Inc. is seeking financing for its fully permitted, Mt. Hope molybdenum mine in Eureka County. Western Lithium USA Corp.’s Kings Valley lithium project in Humboldt County could move forward, too, particularly if Tesla Motors Inc. chooses the Silver State for its gigafactory.

“We’re continuing to see a lot of bright spots in the [mining] industry, but at the same time, it’s facing a lot of new challenges,” Crowley said.

Some Nevada mines have slowed, production and revenue have decreased and some are moving toward temporarily halting operations. For instance, Veris Gold Corp., which operates Jerritt Canyon in Elko County, last year laid off about 60 people and this June, filed for bankruptcy.

“We’re just trying to keep up with the day-to-day,” Newman said. “With so many things, so many events, we stay very busy.”

The ECVA recently launched a new marketing campaign slogan, “Experience the Unexpected,” referring to the unanticipated pleasures people find on their visits to Elko, whether it’s the dining, the natural beauty, the events or something else. Additionally, the agency hosts numerous familiarization tours for tour operators and travel writers and is aggressively targeting the tour bus business.

More flights into Elko would help boost its convention and tourism business, too, Newman said. With additional air service, a larger convention facility and more hotel rooms, the ECVA then could pursue a broader client base, including, for example, groups that rotate their conference/convention/trade show business around the intermountain west.

Because such a significant portion of Elko’s economy relies on gold mining, the NNRDA’s main goal is to diversify the region’s economy, Borda said. (Elko’s other strong industries are government and ranching.) To do so, it’s focusing on other types of mining, such as barite, fluorspar, potash and others. Also, it’s attracting to the region mining suppliers, or companies that manufacture products used in mining, as they can better withstand precious metals and minerals’ price fluctuations.

The NNRDA is developing additional economic sectors for which the region is well suited, such as the various renewable energy types (solar, wind and geothermal) and transportation and logistics.

As for recruitment of companies to the area and expansion of ones already there, the agency has about five leads in the hopper, three of which are prospective new firms, but the recent crisis of zero industrial parcels and buildings has hampered these efforts somewhat. Currently, a business park and a build-to-suit building are being constructed, with more planned.

One NNRDA coup has been the development of the Leadership Council, which encompasses heads of the cities and county under its purview and other regional entities such as the school district, college and ECVA. Newly formed, it’s gearing up to tackle regional issues as one entity.

“That’s really exciting, and I’m pleased about its progress so far,” Borda said.

Redevelopment is needed in many rural areas, including downtown Elko, which has been in a slow decline for some time, has lost a lot of retailers once there and needs revitalization, said Duane Jones, the president of the Elko Downtown Business Association (DBA) and owner of Elko-based Cedar Creek Clothing Co.

On the heels of much planning, the NNRDA is conducting some studies and preparing to award a bid for development of an economic vision for Elko over the next 20 years. Also, some design studies are being done for the downtown corridor, specifically the area where the railroad tracks used to wind through town and now parking lots exist.

Elko’s DBA has been and remains heavily involved in the downtown redevelopment discussions and decisions. It’s a 50-member group dedicated to promoting downtown businesses and maintaining downtown Elko as an attractive, safe, clean and vibrant place.

Also, the association, in June, hired a part-time events coordinator to increase its five months of events to 12. Currently, it offers five Wine Walks per year (which are popular), one of which is a combination Art Walk, along with the Snowflake Festival and Elko Uncorked (a wine tasting), among others.

“That’s the most exciting thing we’re doing right now, stepping on the gas as far as just more promotion and filling in the spaces,” Jones said. “We just need to kind of persevere and move ahead.”

Business for the area’s smaller companies remains fairly steady, said Jennifer Sprout, the CEO of the Elko Area Chamber, the 758-member organization that serves its members by promoting economic growth and stability through advocacy and communication. The chamber itself has been growing at a rapid rate, welcoming 200 new members in a single year. As such, its focus is on engaging all of them, often in one-on-one fashion, helping with whatever they need.

“Our chamber is so strong, our membership is strong and our board of directors is strong,” Sprout said. “Being Elko County and the population that we serve, to have over 750 members is just amazing.”

The chamber has launched a handful of new programs, including Business Before Hours, a morning networking event; Weekly Happenings, e-mail blasts about member and chamber goings on; New Member Orientations; and the Young Ambassador program, an opportunity for 14 to 20 year olds to involve themselves in the chamber and community.

The primary issue the chamber continues to address is the potential for passage of a law enacting a margin tax, Sprout said.

Experts are optimistic about Elko’s near-term future, stating that mining should remain prosperous and productive and grow, and if Noble Energy produces oil nearby, Greater Elko could again experience a boom. The tourism industry should see vibrant growth, too.

“Elko will be fine for years to come,” Mayor Johnson said, “but when we have an opportunity, we should save money. We still have to be smart. It’s not that we’re off the hook.”