You are here: Home / Features / Feature Story / Getting Out: The Financial Planning Features of a Business Exit Strategy 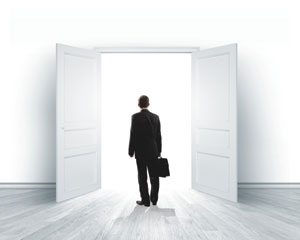 Starting a business takes a large amount of planning. But after the business plan is completed, retail or office space is rented and employees are hired, many entrepreneurs have neglected one crucial question: When the time comes, how will they exit their business?

When owners are immersed in the details of building a business, it’s difficult to imagine selling it or giving it up to the next generation. It’s even harder for business owners to imagine a dream business failing, forcing the liquidation of the contents of the business.

Take, for example, a company that develops slot machines or social apps for the gaming industry. To get the business off the ground the founders need capital. In this case they may be looking for venture capitalists or angel investors, who early on in the funding process are going to want to know how they’ll get a return on their investment. In this instance, an exit strategy at the beginning of a business informs investors of their time-frame for a return.

However, most entrepreneurs who imagine owning a company until they retire usually put off creating or updating their exit strategy. Most business owners will pass the business down to someone else in their family, sell it or close it down.

Regardless of the type of business, having a viable exit strategy in place can save business owners trouble and money later on, according to business brokers and certified public accountants (CPA).

“We see a high level of interest by owners who are ready to sell their businesses,” said Bob House, general manager of BizBuySell.com, a San Francisco-based online business for sale marketplace. “But, most who want to sell have to remember their business has to be in a saleable state.”

House defined “saleable state” as a business attractive to potential buyers. That could be as simple as a fresh coat of paint or a complete face lift. Spend the time and money on capital improvements, he said.

Len Krick, a certified business intermediary with Sunbelt Business Brokers in Las Vegas, said owners need to resolve any unresolved claims against the business or pending litigation before listing a business for sale.

“There are four questions that every buyer asks,” Krick said. “[Why] they are selling the business? How much does it make? Is there upside potential or will I lose money? Where did you get that price?”

Krick said if an owner can’t answer those questions, he or she might want to hold onto the business and try to grow it, instead of attempting a sale. He also said most buyers want to see three to five years of proven cash flow before they make an offer.

Leaving Before a Sale

House said some business owners may also choose to extricate themselves as a necessary entity and turn it over to a family member or business partner.

The degree of involvement in the business determines the importance, time required, and difficulty a business owner has in extracting themselves from the business. For example, no one knows, or cares, who owns a McDonalds franchise in Henderson; not the customers and oftentimes, not the employees.

However, Krick said when a sole-practitioner sells a medical practice, patient retention becomes a major issue. The buyer might want the doctor to stay on for a year to ensure that there is a seamless turnover, minimize patient loss and cash flow continuity.

Since the buyers are purchasing the implied value of the future cash flow, anything that makes that more volatile, increases the risk and, therefore decreases the price. Krick said the opposite is also true.

“If the business has a long, steady history and lots of contracts in the pipeline, then the risk is lower and the price is higher,” Krick said.

When a business owner decides to sell a business, House said they should prepare for a two to three year process. Once a business is listed for sale it can take anywhere from six months to five years to get out of it, depending on market conditions.

“In the Great Recession, a lot of people wanted to retire, but their values took a hit leaving them with few options to sell their business,” House said. “We are now seeing a lot more buyers in the marketplace and asset values have increased.”

Chris Abts, president of Cornerstone Retirement Group in Reno, agreed and added that economic conditions may have improved, but valuations of most businesses are not where they were in 2007.

According to BizBuySell.com, the median asking price for businesses for sale in Las Vegas during the first quarter of 2014 was $169,000. Those businesses had median revenues of $314,623 and a median cash flow of $81,143.

Owners asked for, on average, a revenue multiple of 76 percent and a cash flow multiple of 2.73 times. Those numbers are mostly in line with figures reported in the fourth quarter.

Krick said 70 percent of all potential buyers in Las Vegas are from somewhere else, many from Southern California. While the remaining 30 percent are local entrepreneurs, he said.

BizBuySell.com noted that a dry cleaning business with slot machines in Clark County sold for its asking price of $199,000 in the fourth-quarter. The business, which was not identified by name, had revenue of $131,000 and cash flow of $78,000.

“Planning is the key,” said Audry Batiste, president of Precise Financial Planning in Las Vegas. “At least 50 percent of businesses have no transition plan until it’s too late.”

One item that is often overlooked when planning an exit strategy is the condition of financial records, do the tax returns match the year-end profit and loss statements. Many buyers use Small Business Administration (SBA) loans and should be ready for a close inspection of the business.

Batiste said it’s important to understand the issues that affect a business including life cycle, geographic and economic cycles as well. He said planning an exit strategy is extremely important especially if an owner of a business is disabled or dies.

When a business liquidates, it typically marks down the prices of its inventory to sell it quickly. Any proceeds are used to pay off creditors and then any shareholders in that business. Most of the time, creditors and investors receive pennies on the dollar when a business shuts its doors.

Many businesses don’t plan for the day they can liquidate their company; however, it can be a good contingency plan in an emergency or everything must go situation.

Typically with a buyout, the sale is executed within the company, meaning there is a planned successor, either a family member or someone in an upper level management position, who will assume responsibility for the company. If a company is co-owned, another option is for one partner to arrange to sell their shares in the business to the other partner.

In most cases of an owner buyout the founder or employees will want to keep their jobs. This scenario assumes a well-performing company is generating positive cash flow and profits, Batiste said.

With an owner buyout an agreement is reached with the investors, stockholders or lien holders establishing the value of the company. The employee group will find a way to finance the amount necessary to buy out the interest of the others, taking control of the company away from an outside bidder.

Meanwhile, a simple acquisition entails selling the company, often to a larger outside business. With an acquisition, there is often plenty of room for negotiation. But, Batiste said the trick is making sure the company is a good fit with your business.

House urges owners to think about which acquirer can help their company get into different markets, or how their product or service could bring something new to existing customers. Companies are willing to pay more if they know there is a real and lasting value in the acquisition for them.

“What your company is appraised for is within your control,” House said. “Think about what you can do to increase the value of your business. They are buying a business for its cash flow, so you want to show that cash flow growth.”

House said some business owners, whether they run a small or large company, make the mistake of running their business with the notion that a certain company will immediately want to acquire it. Just like everything else in business, he said never make assumptions about potential buyers.

It’s best if a business owner keeps their options open and run their company without any expectations of who the perfect buyer would be.

If a business is not attractive to a larger company, many entrepreneurs come to a point when merging with a similar company can maximize revenue for both owners. Merging allows a business to increase market share and the value of a company for investors or shareholders.

It can also open up an opportunity for a business to enter a new market and develop new products while lowering operating costs.
Batiste said a merger can be a stepping-stone to an exit, as owners slowly transition the management of the company. In some cases, merging can also allow an owner to retire and take on an advisory role, permitting them to remove themselves from the business over time.

He added that a merger can also give an owner time to ensure that their business and its employees are properly cared for and not laid off with a change in management.

Abts noted that there is another type of business to consider, he called it the lifestyle company. He described a lifestyle company as one where it is the intent of the owner to make as much money as possible for themselves without planning for future expansion.

With these businesses, all profits go directly into their pocket instead of being put back into the business to help it grow, and expenses are kept to a minimum, Abts said.

These businesses tend to be small and private, and the owner dissolves the business when it is no longer profitable or they want to move on to a new business venture. An example of a lifestyle company is a business consulting firm.

An IPO as an Out

One exit strategy that has received a lot of attention over the years is the initial public offering, or IPO. If an IPO is used as an exit strategy, it is important for ownership to begin planning for it right from the start and include it in the business plan.

Taking a company public can be expensive; it can also be hugely profitable.

“We don’t see too many IPOs in Northern Nevada,” Abts said. “It’s not the culture here. In the past, we’ve been driven by two industries, gambling and construction.”

Business brokers caution that out of the millions of businesses in the U.S., only about 7,000 of them are public, and most of those were not started by entrepreneurs, but spun out from existing corporations.

“Somewhere as you’re building your business, there needs to be a succession plan or exit strategy,” Abts said. “It needs to be done sooner rather than later. Too many times, business owners looking to retire and sell their business can’t tell me what their exit strategy is.”

Abts said what tends to happen is a sale is put off for six months to two years while the business is organized and prepared to be sold. A crucial delay to make the business saleable that could affect the sale price of the business.

Abts and Krick agree that all businesses are different, but 2014 is probably the best time since 2007 to consider selling a business in Nevada.