You are here: Home / Features / Building Nevada / Connecting the Dots: Nevada’s Place in the Global Economy 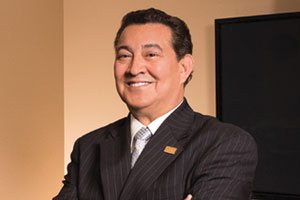 Ninety-six percent of the world’s population lives outside the U.S. Yet only 1 percent of American businesses export their products and services. In countries like Germany and Japan, some 40 to 60 percent of GDP is in export. Still, our 1 percent translates to trillions of dollars coming into the U.S. economy, according to Randy Innis, chair, Nevada District Export Council.

“You have to look at the whole world,” said Ed Cadena, district director, Small Business Administration (SBA). “We’re less than 4 percent of the world population and consume more than anyone else. That’s not sustainable forever, so we need to make certain we participate in the world market. We’re doing a good job of it, actually, but we could do a lot better.”

In Nevada where the need to diversify the economy continues even as recovery takes hold, increasing the number of businesses that export could bolster the state economy. A good position in the global marketplace not only helps diversification efforts, “It means jobs, and jobs mean money, and that’s what every state needs,” said Volker Huber, president, Nevada World Trade Council (NEWTRAC).

Nevada’s numbers when it comes to exports are derived as a subset of the national numbers. “Nationwide, less than 1 percent of U.S. companies export and I think the numbers are pretty close to that in the state,” said Kristopher Sanchez, senior program manager, Nevada Investment and Trade Revenue Options (NITRO). “That’s about 2,700 in Nevada, small and medium enterprises. Those numbers are based on the same numbers, just applied to the state, but I suspect it could be more in Nevada that are actually exporting.”

One of the things NITRO members are working on is identifying Nevada manufacturers. Economic development authorities, once they understand who’s out there, can offer assistance exporting and explain the services available to assist in the process.

Small and medium sized businesses are considered the backbone of our state. From those companies came some $10.1 billion in exports during 2012, according to Sanchez; in 2013 the numbers reflected $8.9 billion. The reduction was driven by mining industry exports. While Nevada has a very strong mining industry that drives a lot of economic activity and ancillary businesses in the industry, Sanchez notes there’s a focus on helping companies that are manufacturing products that are exportable, and seeing growth in that area.

The improvement in export numbers is probably due to efforts being made by organizations partnering with the state government. Governor Brian Sandoval is more engaged in export than many of his predecessors. He organizes and leads trade missions to China, Canada, Mexico and soon to Brazil. These trade missions are meant to strengthen Nevada’s international presence by enhancing long-term economic development and assisting Nevada companies in growing and becoming more competitive internationally, according to the Governor’s Office.

On a recent trade mission to Canada the U.S. Commercial Service arranged industry-specific meetings so delegates from Nevada could network, introduce the state and explain the advantages of doing business in Nevada. Delegates came from the Governor’s Office of Economic Development (GOED), from the University system and from business. One of the topics of conversation was Nevada’s designation as one of the six states named by the FAA for Unmanned Autonomous Systems – drone testing.

Andrew Edlefsen, director, U.S. Commercial Service, had the opportunity to go with one of the trade missions to China in 2013. “A lot of the companies that go on the trade missions are my clients, companies I’ve helped in the past,” said Edlefsen. “The U.S. Commercial Service is essentially the export promotional arm of the U.S. Department of Commerce, so we’re a federal agency. Because of that, a lot of the services and resources are free to U.S. companies and we have offices all over the country and over 70 around the world.”

Edlefsen’s office works closely with GOED and with Sanchez in the international trade arm of GOED. “Basically what [GOED] does at the state level we do at the federal level,” said Sanchez. The biggest difference is at the federal level, the focus is on importing and exporting both; at the state level, the focus is on exporting.

The U.S. Commercial Service also holds local events, encouraging Nevada companies to consider exporting. In the past there hasn’t been much focus on exporting in Nevada because of the incoming travel and tourism business, but there’s a tremendous potential for Nevada companies to look at international markets for doing business.

U.S. Commercial Service offers a range of services including marketing research, intel on foreign markets and helping companies develop export strategies to effectively get their product or service into other countries. The main service, or the bread and butter service, according to Edlefsen, is helping companies find partners around the world, whether they’re in need of a distributor or a sales rep. “Our main objective is to get more U.S. products and services into foreign countries. As we increase exports from the U.S., we hope to see an increase in U.S. jobs,” said Edlefsen.

When business owners are asked why they’re not exporting, more often than not it’s not disinterest but rather they don’t know how. “Ninety percent of the time they just don’t know what they’re making is exportable,” said Cadena.

Positioning Nevada in the Global Marketplace

Reaching out to the global marketplace means finding new markets for Nevada businesses to do business. “Positioning ourselves to take advantage of the international marketplace is accomplished through education,” said Innis. “A lot of people don’t realize the tools we have available for them for businesses able to export the product they produce.”

There are programs available that teach small business owners how to find the correct foreign markets, how to research and analyze the markets. Partnerships with UNR, UNLV and the Nevada District Export Council (DEC) provide student interns to assist companies in doing the research. ExporTech, conducted by Nevada Industry Excellence, provides a three month course of study for small businesses in development with plans for exporting.

Nevada DEC is a volunteer organization with 52 chapters around the U.S. Volunteers are appointed by the Secretary of Commerce to assist small and medium businesses in finding markets overseas for the products and services they produce. DEC volunteers “Deal with all the ramifications of international trade from legal to financing to logistics to consulting on business plans, doing whatever they can do to help the community,” said Innis.

NEWTRAC, with the Governor’s Office of Economic Development, encourages and supports Nevada’s economic diversification and growth by further developing Nevada’s international business opportunities, providing educational seminars and resources and tools essential for businesses to conduct foreign trade. NEWTRAC president Volker Huber is also president and CEO of PRIME Memorysolution, Inc., an electronics distributor of high tech components with offices all over the planet.

NITRO, an extension of the international division of GOED, is funded by SBA and considered a STEP plan – State Trade and Export Program – which offers matching fund grants to states for eligible small businesses. Approved by Congress two years ago with initial funding between $28 and $30 million, this year funding is expected to be reduced by about two-thirds. Funds are used to allow Nevada business owners to travel and secure international contracts, attend foreign trade conferences and create export business plans. NITRO members use funds to locate contacts for Nevada businesses among industry organizations in target countries, share information on the Nevada company’s product and engage interest before the business owners travel.

SBA believes in export to such an extent that Export Express Program loans are 90 percent guaranteed. “The Export Working Capital Program can go up to $5 million and basically anything being produced, any portion of that business produced and being exported, we will go to 90 percent of that loan,” said Cadena.

Why? Because at the end of the day, Cadena says, the 96 percent of the world market outside the U.S. loves American products. “People love to see made in the USA so if you’re willing to ship the product out, there’s a lot of market out there. Like it or not, we live in a global economy. We have to learn to play in that realm.”

Which is getting easier to do. The Internet is shrinking the world, says Cadena, and logistics are getting easier when major companies like USPO, UPS, FedEx and DHL teaching business owners how to get their product out into the world and money back into their pockets.

Another change making it easier for Nevada business owners to expand into exporting products and services is the arrival of micro-lenders, said Cadena. Nevada Rural Development Council handles micro-lending in rural areas and two companies, Nevada Micro-enterprise Initiative in partnership with Valley Economic Development Center makes loans up to $250,000 and Accion USA, the largest micro-lender in the world which started in Nevada beginning of April 2014

As the world gets smaller and continues to enjoy Made in USA products, it also gets easier to manage. Many countries already use the American dollar, and already have American banks in place.

“On the business climate index rating of all 50 states, Nevada is actually number three,” said Huber. “We’re the third best state to do business with; California is 48th.”

Nevada also has Foreign Trade Zones (FTZ) at both ends of the state. We need to take advantage of our FTZ’s for importing component parts and assembling light manufacturing products, said Innis. “The Foreign Trade Zones we have in the state of Nevada have been around since the 80s and not much attention has been given to them. As director of international trade in the Governor’s Office, we’re beginning to place a lot more attention on those as part of the [global marketplace] formula.”

“The reality is because we are in a global economy, the more we leverage our ability to bring in foreign trade, the better it’s going to be for Nevada and our country,” said Cadena.