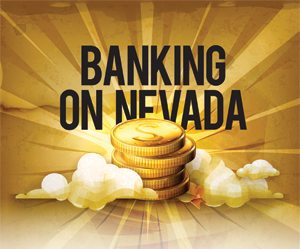 Banking doesn’t exist in a vacuum; the industry is affected by the economic environment which, in turn, can be directly affected by practices and realities within the banking industry. So it should be good news that Nevada bankers are feeling optimistic about 2014.

The banking industry has stabilized, according to George E. Burns, commissioner, Nevada Financial Institutions Division. General indicators show the industry is improving. There are improved loan portfolios, fewer charge offs and delinquencies and improved earnings. “We’re optimistic at this point that those banks that have survived the financial crisis will be good to go for the future.”

Nevada still leads the nation with the highest unemployment numbers, but those numbers are dropping, and in October numbers indicated a 1.8 percent employment expansion over the previous 12 months. In the south, Summerlin Centre is growing up out of the ground, and cranes on The Strip are renovating the Sahara Hotel and Casino. “It’s nice to see cranes flying over The Strip again,” said John Wilcox, Nevada regional executive, City National Bank.

Despite the optimism in the banking industry, Nevada continues to experience a modest recovery. Businesses are beginning to move again, new businesses relocating to the state, existing businesses are coming out of hibernation to grow and expand. For banks, finding qualified borrowers is becoming easier borrower-wise but harder competition-wise.

There are more qualified borrowers than there were two years ago. “People’s financial statements are improving,” said Wilcox. “We’ve seen people get debt off their balance sheets, seen them become much more efficient, seen them accumulate cash, and so we’re starting to see people invest in their growth, which means they’ve got to have a partner in a bank to come along beside them to offer capital to fund that growth.”

Nevada lost a significant number of state-chartered banks to failures and mergers, but competition is heating up between survivors. “The majority of the industry is flush with liquidity and we’re in a period of historically low interest rates, and the best way for banks to improve their margins is to lend money,” said Terry Shirey, CFO, Nevada State Bank. “There is not as much demand for credit right now as we saw prior to the recession, so good loans are highly sought after and there’s a lot of competition.”

Which is great for the businesses themselves. For qualified borrowers, it’s a buyer’s market where two or three banks may be vying for the company’s business. In this recovering economy, when a business owner already has a relationship with a bank they’re apt to stay with it, said Gene Galloway, president and CFO, Plaza Bank. “Since there’s not a lot of in-migration in terms of businesses, those of us who are growing have to take clients from each other, and that’s a longer process.”

Adding to the competition, not every business owner who can borrow money wants to. When it comes to bankers finding qualified borrowers in the post-recession economy, it’s more a case of lagging economic recovery and borrowers having need or capacity to borrow, rather than the new regulatory environment, said Burns.

“Regulations are changing the industry, some for good, some not so good for the industry, in response to the financial crisis,” said Burns. “But most of it is just being able to find people who have the need to borrow. Businesses are lagging and they don’t borrow unless they intend to expand.”

The need to borrow may not be present even if the ability to do so is. “If business owners do have the need and the income streams to support the borrowing, what are they going to use it for? To grow, or just to try to cover overhead expenses? Although bankers like to blame regulations to a very great degree for lending doubt out there, if they’re honest with themselves, they would say it’s really just the demand isn’t there,” said Burns.

Still, it’s improving. Nevada State Bank grew loans about $115 million in 2013 for the first time since 2008 and funded about $51 million in small business loans, which was about flat from the prior year, but consumer loans funded were about $235 million, up $67 million from 2012. “A lot of what we’re seeing and saw in 2013 was a lot of people taking advantage of the low interest rates and low home prices to either refinance or purchase new homes,” said Shirey.

Despite the apparent economic recovery, bankers are still operating in an environment of uncertainty. The government shutdown in the fall of 2013 followed by concern about debt ceiling and the healthcare rollout all have the potential to cause recovery to stutter and stall.

“Today we’ve got a better spirit of cooperation than we have had in a while,” said Wilcox. “We’ve seen a budget passed and I’m hoping that’s a sign of things to come. Because if we eliminate the uncertainty and people can plan for their futures, then we should continue to see progress in this recovery.”

Not only does uncertainty cause businesses to hesitate before expanding or spending money or seeking to qualify for a loan, recent events like the government shutdown meant Small Business Administration (SBA) loans were frozen and couldn’t function; for banks there was uncertainty about when they could fund loans that had been approved under SBA guidelines.

“One big concern for the industry is the regulatory environment,” said Galloway. “Who knows what the rules are going to be and how they’re going to be enforced? Nobody knows. It’s a new game.”

“When capital is injected into the market, it benefits everybody,” said Bruce Hendricks, CEO, Bank of Nevada. “Alternative lenders are assisting in repositioning failed projects. This helps stabilize the real estate market, which helps the banks and borrowers in many ways. A good example is the start-up businesses alternative lending has funded in downtown Las Vegas and the economic resurgence going on there.”

For the most part, many of the alternative lenders coming into Nevada are working with specific niche markets. “On the consumer side, payday and title lenders are making a pretty good volume of loans and such to those borrowers that have become unqualified in the traditional bank sense because of the financial crisis,” said Burns. Borrowers who don’t fit a bank borrowing profile may fit with a small-dollar, short-term loan provider. Because of the high loss volume on such loans, because the borrower’s credit isn’t great or his employment is shaky, the loans carry very high interest rates. “That’s not real good for banks for a public image or regulatory point of view, and it’s unprofitable for them in most instances. That’s the niche alternative lenders as far as consumers go and they’re filling that particular niche.”

A resurgence of investors moving into the state has had an effect on Nevada banks. “There’s been a lot of cash accumulated over the past five years and we’re seeing investors coming in and buying multiple properties and single properties at significant opportunities, and that’s a sign that good things are happening, because those investors are smart. They’re not going to come into a market unless they know they can get a return, so that’s a sign things are moving in the right direction,” said Wilcox. “We’ve seen large investor pools and individual investors; a lot of movement in the last six months.”

Investors moving into the state have helped fuel the real estate purchases, buying bank-owned properties, said Hendricks. “The increased demand helped increase real estate values, which helped existing borrowers and banks shore up loans that have collateral shortfalls and we are seeing improvement in appraised value.”

Not every investor moving into the state is going to want to work with a local bank. Those local investors who have relationships with banks may work with that bank in advance to position themselves in the best situation they can for bank financing and personal equity, while other investors come to the table with financing already arranged or with cash in hand, self-funded.

“To a large degree, the larger investors have their own money already assembled for investment,” said Sullivan. “Some come from very large institutional investors from Wall Street. We are seeing smaller investors who do look for local financing and our bank has been active in this segment, both for commercial and residential property.”

Plaza Bank has two locations, in Southern California and in Nevada, and has seen some in-migration of clients from Orange County to Nevada. “We’ve been able to help them because we’re in both markets, which is unusual for a community bank,” said Galloway.
In the new post-recession banking environment, bankers may act as silent partners for the businesses they work with, investing time and energy and working with the business, meeting quarterly to review financials and progress and to give advice.

One of the biggest post-recession changes to affect banks is the new economic environment. For many state chartered banks, their primary economic driver was commercial real estate, one of the economic sectors hardest hit by the economic downturn. That market is beginning to stabilize and recover, but acquisitions and development loans for commercial real estate were primary lines of business for some banks and that market will probably never recover to the levels it had hit in 2007.

Which means banks are looking for other lines of business to pursue so they can support operations and make a profit. Banks are looking at more consumer lending, small business loans and SBA lending where there’s a government guarantee to help back up the loans being made. They’re providing more services to their customers, and they’re being more creative. “All of which is good news for businesses working with banks,” said Burns.

The banking industry as a whole is dedicating more resources to risk management, a change driven in part by new regulations but much of it also self-imposed, said Shirey.

Bankers are working harder and smarter. They can no longer simply advertise their lowest rates and create loans. Today they dig deeper than the initial request for funds to discover the true needs of the borrower and address those needs, which sometimes require a solution that’s different than what the client anticipated in the beginning.

“So banking has changed in that we have to be real consultants in terms of coming alongside clients and potential clients and making sure we understand what their needs are and meet those needs as opposed to just responding to ‘what are your rates and what do you charge?’” Wilcox said.

As for interest rates, conventional wisdom says if they move at all in 2014, they’ll go up, though probably only slightly. It’s also not really a question of if they’ll go up this year, but when.

The hope for 2014’s banking industry is continued stabilization and for banks to continue improving regulatory status of safety and soundness, meaning improving capital levels and increasing the volume of qualified loans.

“Nevada banks are among the best capitalized in the nation because of requirements put on those that have survived through the financial crisis,” said Burns. “They are increasing loan growth, the average was 11 percent in 2013, which is well above the 4 percent average net loan growth nationwide. There is recovery going on. As banks go back to lending and providing new service lines, their profitability improves.”

“Banks are much more cautious about lending,” said Sullivan. The days when banks would lend 80 percent of appraised value, assuming the values would increase by 10 percent or more per year, are gone, as are practices like lending on properties that don’t produce cash flow, like speculative commercial buildings and raw land.

“Yes, there are opportunities but the reality is there’s a lot of competition from a lot of sources,” said Hendricks. “Competition from traditional banks and alternative lenders.”