You are here: Home / Features / Building Nevada / Back to Basics: Architects and Engineers in Nevada 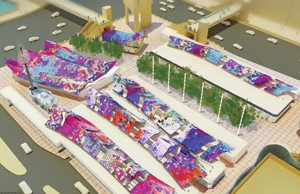 It may not usher in the booming economy that Nevadans were basking in just a short decade ago, but architects and engineers around the Silver State say they expect to see the appearance of a light at the end of the recession tunnel this year. “The outlook looks quite good. There was almost a stop in commercial construction and we’re seeing it pick up in almost every aspect,” says Robert Finnegan, president of Finnegan Erickson Associates in Las Vegas. “People are doing more specific spaces. Also, the resorts are doing very large remodels.” As the tourism market has embraced overall entertainment coupled with the ubiquitous gambling, resorts have had to respond to this expectation by adding more options such as spas, retail shopping and updated restaurants. To keep up with the fierce competition resorts must constantly upgrade to maintain the required fresh look.

Craig Galati, principal and president of Lucchesi Galati Architects (LGA), says his firm experienced somewhat of a recovery in 2013 and he expects that to continue this year. “We’ve seen an increase in inquiries. We have a six-month backlog,” he explains.

Change is in the air for recession survivors because they might be more likely to believe some of the positive economic figures now being bandied about. “We keep hearing news that the economy is better,” says Greg Erny of Architects+ in Reno. “Despite the positive indicators that might be out there though, everybody is still very cautious.”

Change may also be in the air because people have become used to an economic situation that is far removed from the years of explosive growth in Nevada. “A lot of times recessions happen because people pull back,” Galati says. “Things are known now. People have figured out how to deal with things.”

The Reno/Sparks NAI Industrial Market Report for the fourth quarter of 2013 has certainly put smiles on many business faces by reporting a vacancy rate of 9.1 percent for the Northern Nevada industrial market. This is the first quarter the rate has been below 10 percent since 2008. Rates well in excess of 10 percent were common during the downturn. The report also shows gross absorption of 1,668,673 square feet, net absorption of 1,449,351 square feet with 41 transactions representing a 16 percent increase over the five-year average.

The news from Southern Nevada is similarly encouraging with reports from the University of Nevada, Las Vegas’s Center for Business & Economic Research forecasting that unemployment numbers will continue to drop and revenues will go up this year. Although Nevada’s unemployment rate is still high when compared to other states, it’s expected to dip to 6.9 percent by the end of this year. Visitor volume in Clark County is expected to reach 43.7 million and gross gaming revenues are projected to top out at 9.8 billion this year. The county is also expected to add around 1,600 additional hotel rooms this year.

Although many building professionals believe a corner is being turned, they don’t expect the skyline over Nevada to be peppered with dozens of cranes perched at the sites of brand new high rises any time soon. “There are renovations, demolitions and upgrades with less new construction,” says Kurt Goebel, senior vice president and environmental division manager in Las Vegas for Converse Consultants.

The recovery appears to be somewhat biased, at least for now, on upgrades of existing properties rather than new construction from the ground up. “Owners are saying they put off doing anything and now they have to do something to meet new levels. It’s a real healthy competition,” Finnegan says.

So far the work seems to be coming in from both public and private sources, according to the engineers and architects. “We do a fair amount of public work and also some private work,” Galati says. “Most of the private is tenant improvements.”

Typical of the private work is Investment Counsel Company’s recent renovation and expansion in Las Vegas. “We just finished their space. They took another 4,000 square feet and did a remodel on the whole space,” Galati says. His firm is also working on a new 15,000-square-foot parish center for St. Anthony of Padua Catholic Church.

Some new private construction indicates a revival in the interest for retirement housing. “We’re working on a 400-unit luxury adult high rise in Henderson,” Finnegan says. “We’re really bullish on this. Housing is the reason. There are more things to do here [in Southern Nevada] and it’s easier to get around than in Phoenix,” he says. Finnegan is happy to report that the 30+ employees in his company are busy with more than 100 projects on the books.

With offices in Reno, Elko and Clark County, Converse has found work all over the state including the following projects:

Other construction projects that are expected to provide work include the Shops at Summerlin, Bill’s Gamblin’ Hall (formerly the Barbary Coast), Resorts World (formerly Echelon Place) and the Union Village in Southern Nevada along with the $50-million renovation of John Ascuaga’s Nugget in Sparks.

One of the best indicators of a turn-around in commercial construction is that many engineering and architectural firms are in a hiring phase for the first time in years. They say the amount of work coming in now will support additional workers. Converse Consultants dropped to 20 employees from a high of 50, but is looking to fill two more positions. Geotechnical & Environmental Services, Inc. is down to 32 workers from a high of around 60, but is looking to hire more, according to Gregory DeSart, president of Geotechnical.

Part of the problem of balancing the number of employees with the amount of work is the loss of workers that came with the recession. Erny experienced the exodus of architects from the state in his position as chairman of the Nevada State Board of Architecture. “We’ve seen a significant loss of licensed architects, but it’s coming back,” he says. DeSart just hopes to find qualified people for his open positions. “The talent just left with the jobs. There’s still a shortage of good engineers,” he says.

As they contemplate the future with renewed optimism, architects and engineers hope that the current uptick will lead to continued growth as we go forward. “In my opinion there’s a strong degree of psychology and there’s more concrete energy. People get tired of negativity and want to create their own reality. It’s somewhat of a snowball effect. There’s more discussion about positive things,” Goebel says.

It also seems that the enthusiasm and belief in the future of Nevada is back, although maybe not at quite the same fevered pitch as during the boom years. “I still think Nevada has a tremendous amount of potential and untapped resources. There’s more diversity than what we realize. This is a critical time and we have to make sure Nevada remains a destination state,” Goebel says.

Construction professionals point out a number of specific industries that can be utilized to create greater diversity and growth. These include medical tourism, high tech, alternative energy, retirement housing, manufacturing and distribution along with the traditional pillars of gaming and tourism. DeSart believes that the construction of Interstate 11, which is in the planning stages, will be of big benefit to the state by connecting Phoenix to Las Vegas starting at the Mexican border and continuing on to Canada. “This road will be huge for us in the future,” he says.

Erny expresses concerns about the threat of government regulation and the continued scarcity of investment dollars that could jeopardize economic growth. For many years Nevada has benefited from the flight of businesses from overly taxed and regulated California. “I believe the market should seek its own level and the less government the better,” he says.

Galati acknowledges that during the boom years most businesses were fat and happy. Times are definitely different now, however, and a noticeable learning curve is in place regarding prior attitudes. “I don’t think we’ll ever throw caution to the wind and say that we’re recession-proof,” Goebel says. In addition to employing a more cautious approach to their projects, construction professionals say they are trying to work smarter and with greater efficiencies. “We are much more aware of how we spend our money. We look at every level to get the best value, but not necessarily the cheapest,” DeSart says.

“The quality piece is even more important. We are aware of needing to give hyper good service to our clients,” DeSart added.
Despite the rough roads traveled in recent years, architects and engineers say that the lights are still burning brightly in Nevada and, at the end of the day, the characteristics that made it a destination for many will continue to serve the state well in the future.
“One of the most important things is that as businesses we support each other and keep common sense as a core value. We need to remember our roots and what makes us unique,” Goebel says.