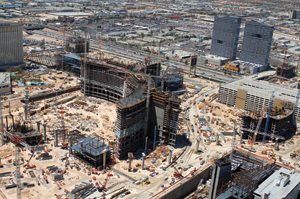 Nevada’s commercial real estate market has hit bottom and is recovering, albeit gradually and with some sectors stronger than others, experts said. Due to a confidence that the market is on the upswing, investors and tenants are willing to buy and lease. In fact, brokers completed some sizable deals in 2013, including the sale to Genting Berhad, a Southeast Asia casino operator, of the unfinished Echelon resort for $350 million and the sale to Blackstone Group LP, a global investment and advisory firm, of the Hughes Center complex for $347 million. In Northern Nevada, a significant 2013 deal was in the industrial sector, with the leasing to CustomInk, an online T-shirt seller, of a 51,240-square-foot building in the Reno Tech Center that’s been 70 percent empty for many years.

“It’s been getting better every single year,” said Nelson Tressler, the executive managing director of the Las Vegas office of Newmark Grubb Frank Knight, a commercial real estate advisory firm with numerous locations worldwide. “The retailers are doing better. Rents have leveled off. Concessions have leaned back a little bit. Vacancies have lowered. We’re definitely heading in the right direction. It’s definitely not skyrocketing but creeping up.” Tressler previously worked for Grubb & Ellis, which filed for bankruptcy in 2012 and subsequently was purchased by New York-based BGC Partners. The previous year, BGC had acquired the brokerage, Newmark Knight Frank. Subsequently, the corporate owner merged the assets of both to create what’s now called Newmark Grubb Frank Knight.

During the transition out of the worst of market conditions and a depressed economy, brokers have faced numerous distress sales, significant negative absorption, depressed rental rates, greatly reduced values and minimal new construction. Consequently, they’ve had to adapt and be flexible, said Cathy Jones, the president of the Southern Nevada Chapter of CCIM, a trade association for commercial real estate professionals. Jones is also the owner/president of Sun Commercial Real Estate Inc., a service brokerage firm, which specializes in investment sales. For one, brokers have had to learn how to sell bank-owned and distressed properties.

Then they’ve had to adjust to a changing clientele, Tressler said. In terms of sales, it’s shifted from banks or special loan services back to conventional owners and landlords. With leasing, it’s moved from people looking for low rent opportunities to upgrade their space to existing businesses wanting to relocate or expand in a different location.

Due to cautious and, what Jones describes as, “more educated” and “more conscious” investors and tenants, brokers have had and continue to have the required knowledge and put more effort into potential transactions. This is because buyers and tenants are spending more time on the contracts and due diligence. For Jones, each prospective deal requires 50 percent more work today.

“Every deal seems to be a little more complex than they were in the past,” he said, “just to make sure they qualify for a loan. It’s not easy. Lending standards are higher. You’re not going to see a lot of naïve people getting into this.”

Brokerages have had to run leanly and efficiently. At Colliers Reno, every employee is responsible for duties across positions. For instance, one individual might do graphics and research. Colliers Reno plans to add two employees in 2014—few people are entering the commercial real estate brokerage industry in Northern Nevada currently—and the firm is busy enough for more help, Ruffin said. In Las Vegas, Sun Commercial Real Estate is expanding, looking to add four to five agents, according to Jones.

Today’s struggles for the commercial real estate market and its agents include the condition of the state’s economy, Ruffin said. While Nevada is creating lots of jobs that bolster the industrial market, it needs more higher-paying ones that, in turn, will increase the cost of housing and drive more office and retail occupancy.

Properly valuing assets is another difficulty, Jones said, although it has eased somewhat with recent transactions and the related comparables that can be used.

Another challenge is providing out-of-state, prospective buyers and tenants with solid information about Nevada’s recovery and economic future, and, in many cases, reversing their unfavorable perceptions about the state, Jones said.

As of mid-December, in the Las Vegas Valley, the multi-family market held as the strongest of all of the commercial real estate sectors in terms of maintaining values and high sales volume activity. The vacancy rate, which has declined for three years straight, was 5.9 percent at the end of the second quarter of 2013, Colliers Las Vegas’ Q2/13 Multi-family Market report showed.

The retail segment has out-performed the industrial and office markets. Vacancies, which had reached upwards of 11 percent during the economic downturn, now are trending at less than 10 percent, Applied Analysis statistics revealed. Several tenants are occupying previously vacant anchor spaces. For instance, in Rainbow Plaza, Goodwill signed a deal for the 31,600-square-foot former Ultimate Electronics, Ross is moving into a 31,800-square-foot space in Best on the Boulevard and Sprouts leased 25,400 square feet in Stephanie Street Power Center. As far as sales, Newmark sold The Shoppes at Harmon Square in Las Vegas for $11.5 million, Sun closed the purchase of the Civic Center Plaza in North Las Vegas for $13 million and the CBRE Private Capital Group brokered the acquisition of the Boulevard mall in Las Vegas for $54.5 million.

Industrial is showing improvement, with about 3.2 million square feet of positive absorption in the previous 12 months. Vacancy rates had fallen from a high of about 17 percent to 14.8 percent by the end of 2013’s third quarter, according to Applied Analysis. Leases included the coffee distribution company, Organo Gold International’s 111,000 square feet in the Pacific Business Center in Henderson and the third-party logistics firm, Hand Air Express’s 67,600 square feet in the ProLogis Sunrise Industrial Park. Also, a number of build-to-suit industrial projects are underway, such as the 525,000-sqare-foot structure for the data center, Switch; the 296,000-square-foot facility for FedEx; and the 193,400-square-foot expansion for Konami Gaming Inc., a creator of slot machines and gaming enterprise management systems.

“Investments are taking place in the industrial market more so by specific users as opposed to speculative users,” Gordon said.
The market that continues to lag is office, currently with the highest vacancy rate—25.9 percent at the end of the third quarter. Bright spots are that some big players came into the market (The Krausz Cos. Inc., a California-based commercial real estate investment company, purchased the stalled former Manhattan West project, now called The Gramercy, for $20 million), and the vacancy rate in the third quarter declined for the second consecutive quarter. Recovery is taking place “in pockets,” Jones said, in the most desirous locations.

Throughout 2013, Las Vegas Valley commercial real estate attracted a significant amount of money from stronger markets, Jones said, due to bargains in the form of shrunken values.

In Northern Nevada, the multi-family market is active and strong. For instance, in 2013, the 230-unit Courtside Gardens, in Sparks, sold for $9.8 million, and Reno’s Harvard Court apartments went for $2.65 million, among many others.
The industrial market also is faring well, with a vacancy rate around 10 percent. More industrial transactions were done in the third quarter than in the previous three, pushing net absorption to 460,744 square feet, Colliers Reno’s Q3/13 Industrial Market Report showed. Examples of completed deals include the sales of the previous New West distribution facility in Reno for $2.3 million and a 181,440-square-foot Reno building for $6.5 million.

In terms of the office sector, several buildings were sold in 2013, double the number in a typical year. For instance, NAI Alliance represented the buyer in the sale of the old U.S. Bank building in downtown Reno for $5.98 million to a local investor. NevDex Properties, a Reno landlord for class A office space, purchased the building at 10615 Professional Circle for $4.65 million. The office vacancy rate has dropped from a peak of about 20.5 percent to 16.5 percent. In the first three quarters of 2013, more than 120 office transactions were made.

The retail segment is struggling to fill the smaller spaces. Additionally, some of the big-box spaces are difficult to fill as a number of companies have moved toward smaller brick-and-mortar formats. More activity is taking place in sales. Deals there include the sale of the 85,000-square-foot, former Woolworth’s building in downtown Reno for $1.7 million and the acquisition of the prior Super K-Mart building in northwest Reno for $4 million.

“It’s all cash, patient money,” Ruffin said. “They’re buying for half the cost to replace and will wait for the market to recover.”