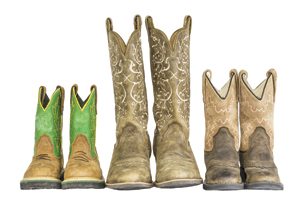 As Nevada prepares to celebrate its 150th birthday in 2014, Elko’s National Cowboy Poetry Gathering is commemorating 30 years of presenting the artistic traditions of ranching and cowboy culture of the American West. Held the last week of January each year, the event brings thousands of visitors to Elko.

From its inception, the gathering defied expectations. In 1985, the event’s producer, the Western Folklife Center and other organizers assumed it would be a one-time gig. An event that started out with 40 performers, mostly poets, has grown to 53 performers in 2014, split evenly between poets and musicians. Another 85 exhibitors, workshop leaders and discussion participants are also part of this year’s program. Close to 400 local volunteers make the effort possible.

In the early days of the gathering, Elko’s hotels could not accommodate the demand for rooms. Elko has grown with the event, and hotels are plentiful now; for the four busiest nights of the gathering, they are filled almost to capacity. Hotels aren’t the only Elko businesses that benefit from visitors. An economic impact study conducted by the Nevada Commission on Tourism in 1997 found that the total economic impact of the event in Elko was $7 million during the week of the Gathering.

The event is a celebration of western people, their lifestyles and traditions. Those who care about the rural west gather together to listen to its native poetry and music, hear about cowboy culture in the U.S. and around the world and discuss issues important to people living in the rural west. The audience has grown from 1,000 people in the first year to roughly 6,000 people today, 40 percent of whom hale from urban or suburban communities nationwide. The international audience is also growing.

This year’s gathering takes place January 27 to February 1, 2014 and is the 33rd anniversary of the Western Folklife Center. The center is focusing the programs at the National Cowboy Poetry Gathering on the future of the rural west and the health and vitality of its communities. One primarily goal of this endeavor is to cultivate the next generation of people who will care for these communities and their cultural life.