You are here: Home / Features / Building Nevada / The Role and Responsibilities of State Officers 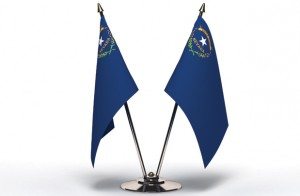 In Nevada, six constitutional officers comprise the state government’s executive branch. They are the governor, lieutenant governor, attorney general, secretary of state, state treasurer and state controller. All are elected to four-year terms and may serve a maximum of two terms. Next year, Nevadans will vote for all positions but governor.

The primary obligation of these governmental branches is to carry out laws, programs, services and policies of the state in accordance with legislation. But what do each of these officers and their staffs specifically do toward that end?

A typical day for the governor includes any number of these tasks: visiting a school or business, writing or delivering a speech, preparing for or attending board and other meetings, getting updates from staff, calling CEOs of companies looking to relocate to Nevada, signing letters and documents, going on trade missions and attending events.

“No two days are ever the same,” said Governor Brian Sandoval, who took office in 2011. “I love my job and look forward to going to work every day.”

The governor is the chief executive of the state and the commander-in-chief of its military.

Holds the Powers to:

For Sandoval, priorities have been and continue to be economic development, jobs creation and education, he said. Other significant areas are finance, healthcare, the environment, higher education, agriculture and more. Most important, he added, is giving each area of concern the attention and work it needs.

Some recent accomplishments include Nevada having 34 straight months of economic improvement, becoming the first state to legalize Internet poker, moving from half-day to full-day kindergarten in the majority of the state’s public schools and reducing wait times by at least half at the Department of Motor Vehicles.

The lieutenant governor presides over the state Senate and votes in the instances of ties.

During the governor’s absence from the state, the powers and duties of the governor’s office fall on the lieutenant governor. Earlier this year, Governor Sandoval asked Lieutenant Governor Brian Krolicki to chair the Nevada Sesquicentennial Commission, tasked with planning and coordinating Nevada’s year-long 150th anniversary celebration. The most profound duty of the lieutenant governor’s office, Krolicki said, is being fully prepared to immediately assume the role of governor should it become necessary.

The lieutenant governor also serves as the primary advocate for the promotion of trade and tourism opportunities for Nevada. Since 2006, when voters initially elected him to this post, Krolicki has been particularly dedicated to matters involving economic development and tourism, advocating for businesses to locate and expand in Nevada and championing the Silver State as one of the world’s top tourist destinations. In his role as chairman of the Reno Tahoe Winter Games Coalition, for example, he’s helped bring the Continental Cup of Curling to Las Vegas in January 2014.

Attorney General Catherine Cortez Masto, who took office in 2007, describes her job as never knowing what’s going to happen day to day. What is certain is that as the top legal officer of the state, her position, includes numerous duties.

“We try to do all of that within an environment of accountability and open government,” she said.
The attorney general also administers an office of about 350 individuals statewide, including 156 attorneys, 48 peace officers and numerous support staff members. She also sits on many boards, including transportation, examiners and prison commissioners. The attorney general’s office is divided into five bureaus: litigation, government affairs, criminal justice, consumer protection and administration.

The office’s most important responsibility is representing the state, which encompasses 200 agencies, boards and commissions, and protecting it from any liability, Masto said.

“The depth and breadth of what we do most people do not realize,” she added. “They literally think that I am just the attorney for the governor. They don’t understand everything that the office does.”

For instance, the Citizens Response Unit fields and works citizen complaints. The Cybercrimes Unit focuses on crimes that occur via the Internet or other technology. The Fraud Unit addresses all kinds of fraud and unfair trade practices. The Consumer Protection unit is dedicated solely to educating the public about scams, fraud and other perils and protecting themselves.

Attorney General Masto and her office are especially committed to the issue of human sex trafficking, and also work on the problems of domestic violence, substance abuse and elder abuse and exploitation. For instance, when the Nevada Legislature last met, Masto introduced a bill that would make sex trafficking a crime in the state. In the past, she also has pushed for legal definitions of cyberbullying. The attorney general may introduce up to 15 bills per legislative session.

According to Secretary of State Ross Miller, who began serving in this position in 2007, his and his office’s most significant responsibilities are ensuring the integrity of elections; encouraging the development and diversification of Nevada’s business community by providing innovative, expeditious and cost-effective services; protecting consumers from investment fraud through effective regulation of the securities industry, enforcement of the securities laws and education of the public; and maintaining records and information filed with the office.

The most important responsibilities of the state treasurer are investing Nevada’s money and managing its cash, said Treasurer Kate Marshall, who began her first term in 2007. Her office invests the state’s money with the primary goal of having liquidity to pay the state’s bills and, secondarily, achieving a return. The treasurer’s office has a staff of nearly 45.

The treasurer is a member of the Board of Finance, the Executive Branch Audit Committee and the Nevada Capital Investment Corp.’s Board of Directors and serves as chair of the Board of Trustees of the College Savings Plans of Nevada.
One undertaking State Treasurer Marshall has launched that has been unexpected is the creation of a pilot program, College Kickstart. With non-taxpayer dollars, she has opened college savings accounts for about 3,500 current Nevada kindergarteners.

“Our hope is to expand this statewide once we finish the pilot for every public school kindergarten child, in an ongoing fashion every year,” she said.

“Most people have no clue what the controller does,” says Kim Wallin, the chief fiscal officer of the state and a certified public accountant. “People often confuse us with the treasurer’s office. Granted, we work very closely together, but we have very distinct functions.”

Whereas the treasurer holds and invests the state’s money, the controller collects, accounts for and spends it. The controller only can spend money the treasurer releases and can’t spend any money without both offices knowing about and signing off on it.

The state controller and their office, currently with a staff of 42.

The most significant responsibilities are maintaining the statewide accounting system, ensuring all monies are accounted for properly and accurately preparing financial statements, Wallin said. A sizable new undertaking is doing preparatory research—a benchmarking study is underway—for purchasing a new accounting system, as the current one is outdated and no longer meets all of its users’ needs.

The controller also advocates for Nevada’s citizens through recommendations for the most efficient, cost effective and ethical use of the state’s money. Wallin said she always is looking for waste and inefficiencies and asking her staff, “Why do you do it this way? What are some issues you’re having?” Since assuming office in 2007, she’s required all of the state agencies to use the same, standardized billing claim form.