You are here: Home / Features / Cover Story / How We Stack Up: Ranking Nevada 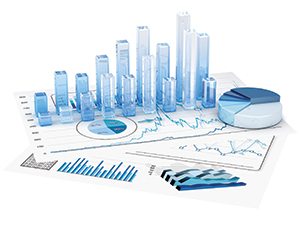 The Nevada economy is showing more positive signs in 2013 than it did last year, especially in critical indicators like unemployment and housing.  While many Nevadans still fear that the light at the end of the tunnel may be an oncoming train, there are hopeful signs that travel and tourism are gradually rebounding, more Nevadans are finding work, and fewer homes are being foreclosed.  Although economic indicators seem to be moving up, Nevada is still plagued with ongoing social problems like the quality of education systems.  These lead to concerns about the quality of life in the Silver State, which negatively impacts Nevada’s ability to attract new business – a vital part of the long-awaited economic recovery.

Nevada ranked dead last in the education category in the Annie E. Casey Foundation’s 2013 Kids Count report, the same dismal ranking it held last year.  Standardized test scores are consistently lower than the national average, fewer adults have high school diplomas or college degrees and Nevada students are more likely to drop out of high school.  Comparing this year’s numbers to last year’s shows some improvement in test scores, but not enough to spark any great optimism about the future of education. As politicians debate about how to raise levels of achievement, the future of Nevada’s children, economy and state hangs in the balance. 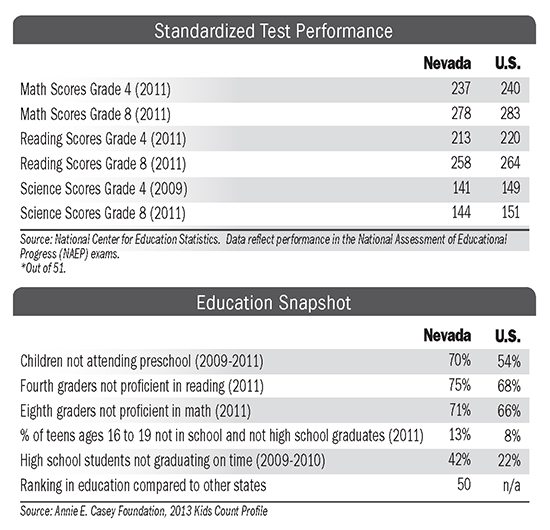 Travel and tourism are the lifeblood of Nevada’s economy, resulting in over $29 billion in economic impact each year and supporting more than 300,000 jobs.  Visitor volume, convention delegates and gaming revenue are all showing slight increases, leading to hopes that the state’s economy is finally starting to rebound from the recession, although employment in the casino industry hasn’t completely recovered.  Like the U.S. economy as a whole, Nevada’s economy is dependent on consumer spending, including spending on entertainment and vacations, so the return of tourists and gamblers is a welcome sign. 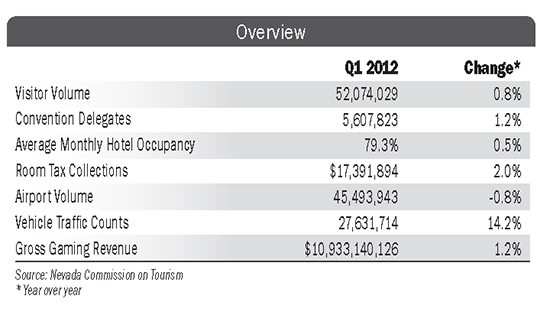 Nevada is one of only seven states with no personal income tax, but Nevadans still pay about the same percentage of their personal income in state taxes (6.7 percent) as the national average (6.2 percent).  However, calculating the entire tax burden (both state and local taxes), Nevada ranks 42nd among the 50 states, and low business taxes make the state attractive to businesses looking to relocate from high-tax areas. While most food items are exempt from sales tax in Nevada, sales taxes on other basic commodities like clothing, gasoline and household goods tend to hit low-income people harder than those with more disposable income. 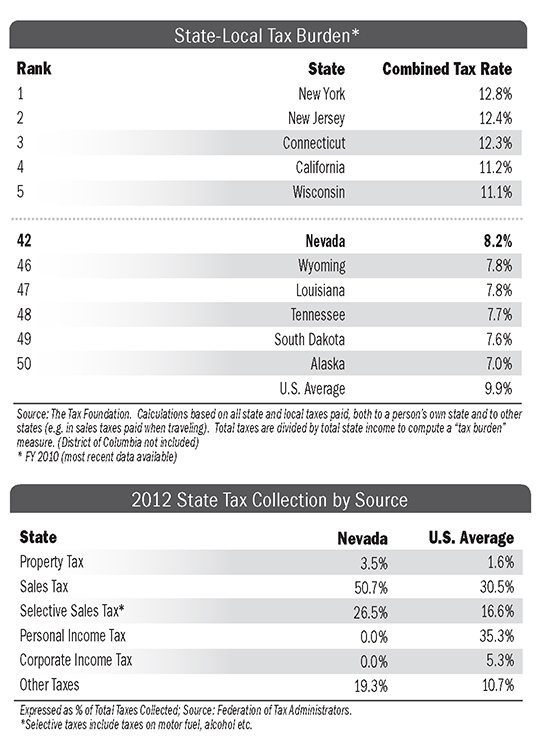 Nevada compares well with competing markets when it comes to costs for commercial real estate, wages, workers comp insurance, utilities and other business basics.  Because of overbuilding during the commercial real estate boom, plenty of inventory is available at reasonable prices, and the relatively high unemployment rate makes it easy to staff a company.  Since Nevada does not have corporate income tax, franchise tax, unitary tax or inventory tax, business tax rates make it especially competitive. 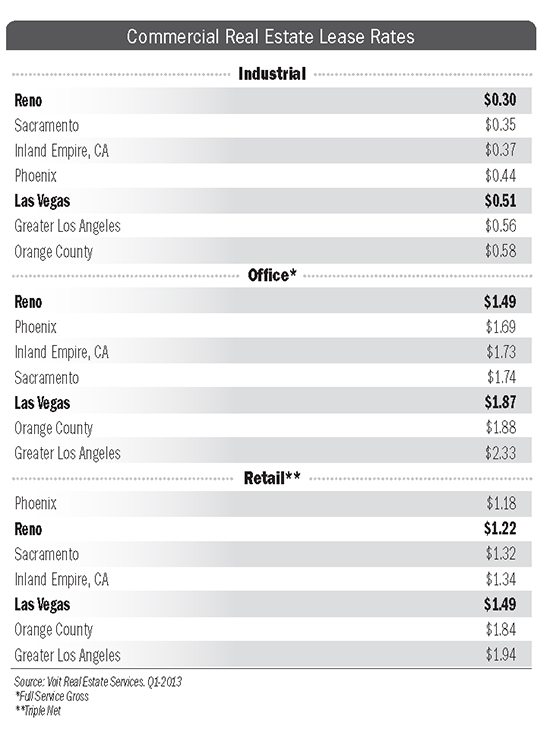 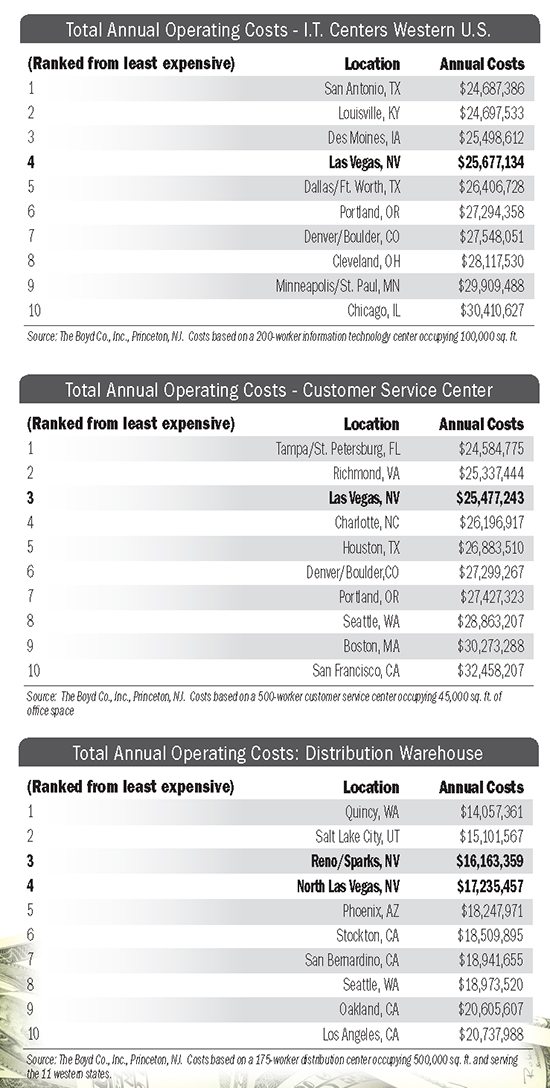 Nevada’s two largest metro areas rank close to the national average for cost of living, with Las Vegas showing slightly higher numbers than Reno/Sparks.  Considering Nevada’s low tax burden on individuals, residents keep a higher percentage of their earnings, which can be spent on housing, groceries and other necessities.  Despite the economic downturn, the state has a lower percentage of people living in poverty and a higher average household income than U.S. averages. 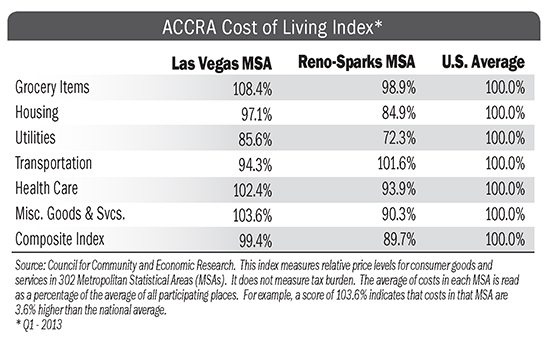 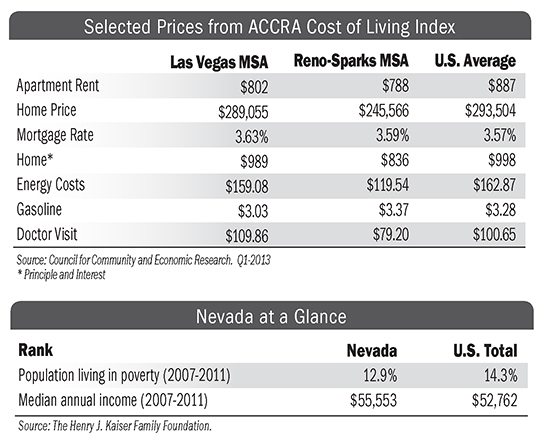 While people may be attracted to the “anything goes” image promoted by tourism agencies, the fact remains that both visitors and residents want to feel safe in Nevada and, unfortunately, the violent crime rate is among the highest in the nation.  However, the numbers are improving in virtually every category.  Nevada still ranks sixth in total violent crimes per capita, however, this represents an improvement from last year’s ranking of No. 2, and in property crimes the state moved from 26th to 33rd. In addition, the numbers would look different if the transient population were taken into account, because tourists increase the number of people in Nevada by nearly 140,000 on an average day. 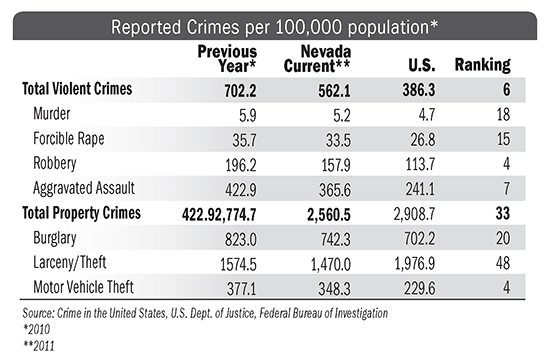 Both government and private sources rank Nevada near the bottom of all states for the quality of healthcare.  Twenty two percent of the population lacks health insurance, and the rate of uninsured children (19 percent) is nearly twice the national average.  How the Affordable Care Act will affect these rankings is anyone’s guess. Meanwhile, Nevada still needs to deal with a shortage of primary care physicians, a low rate of child immunizations and higher than average rates for cancer deaths, suicide and overweight children. 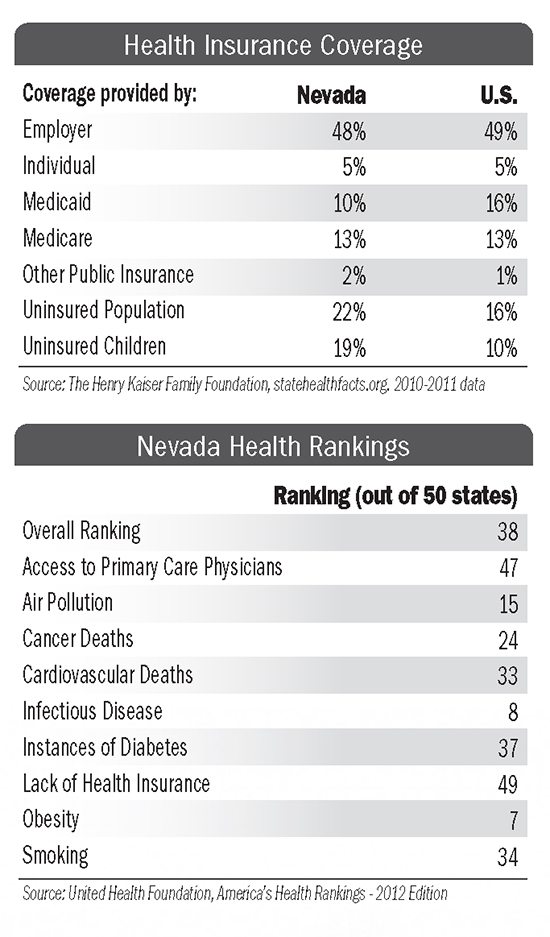 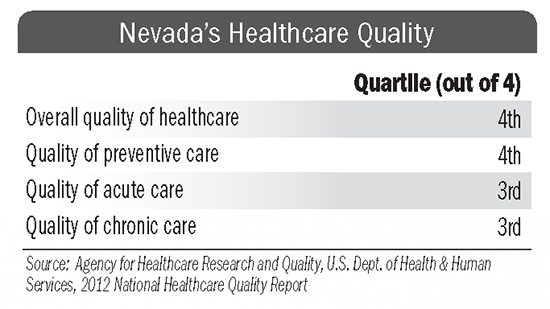 Nevadans have been holding their collective breath for quite a while, hoping for a revival of the state’s depressed housing market.  The latest round of figures shows that the turn-around may at last be arriving, although more slowly than what was hoped.  More residential units are being permitted, the housing price index is rising and median home values have increased 5.4 percent since last year’s figure.  The Silver State had held the dubious honor of ranking No. 1 in foreclosure rates for several months.  As of May 2013, the state had dropped to No. 2, but the rate of one out of every 305 homes in foreclosure is still considerably above the national figure of one in 885. 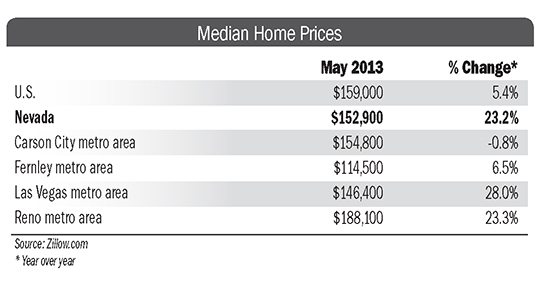 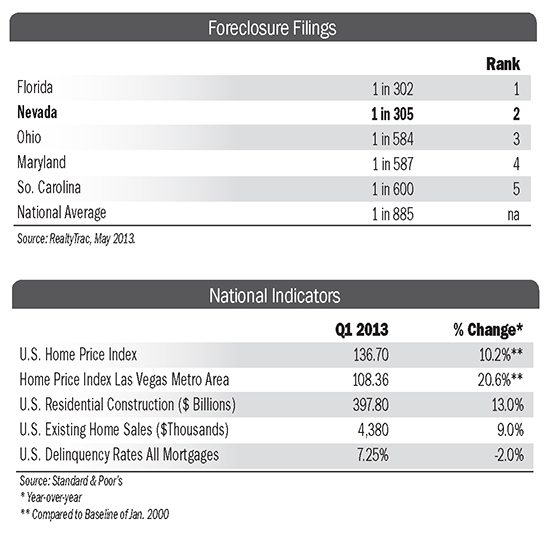 The employment situation in Nevada is a classic case of “good news, bad news.”  The good news: the unemployment rate has gone down two percentage points from last year.  The bad news: Nevada still leads the nation in unemployment, with a rate of 9.5 percent compared to the U.S. average of 7.6 percent.  Jobs in leisure and hospitality have increased as travel and tourism have started to rebound, but the state still has a long way to go before it reaches healthy employment numbers.  Since people without jobs have less money to spend, unemployment negatively affects the consumer-driven economy across the board, from retail sales to housing. 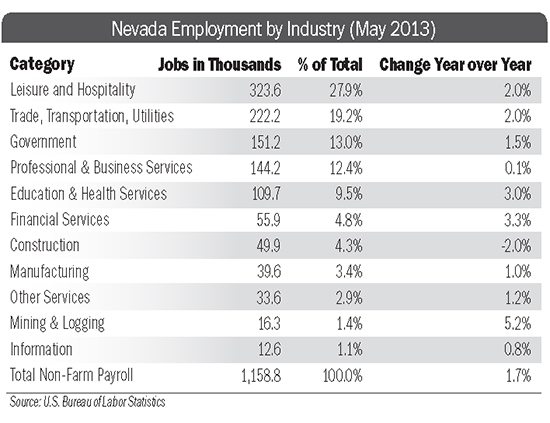 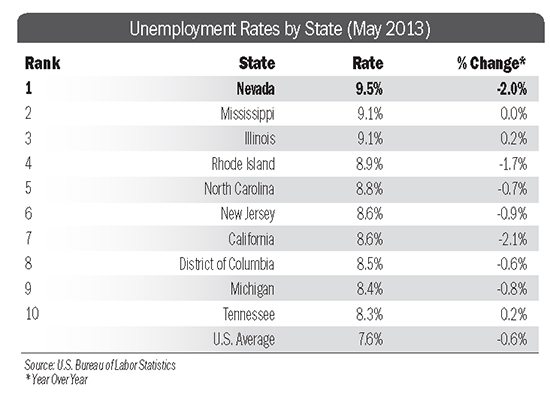 Nevada moved up from No. 12 to No. 9 in CEO Magazine’s “Best States for Business” poll in 2013, receiving four out of five stars in the “taxation and regulations” category.  Taxes and regulations also garnered Nevada a No. 3 rating in the Small Business Survival Index, although it was a drop from our second-place ranking last year.  Some factors like geographic location and climate are uncontrollable, but voters and policy makers can influence the regulatory environment, as well as social conditions like the quality of healthcare and the educational system.  In order to continue to be ranked among the best states for business, Nevada needs to maintain a balance between fiscal responsibility and social welfare. This will attract new businesses and ensure the success of companies that already call Nevada home. 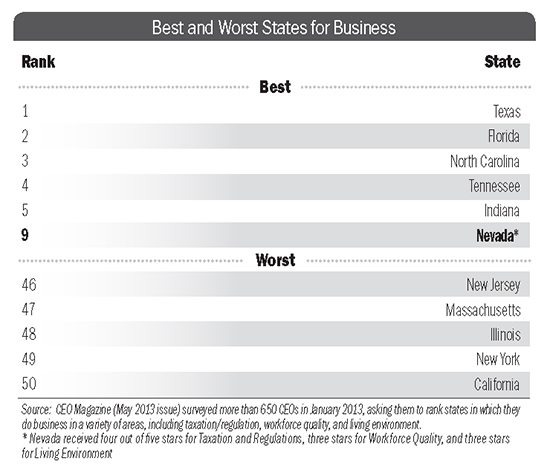 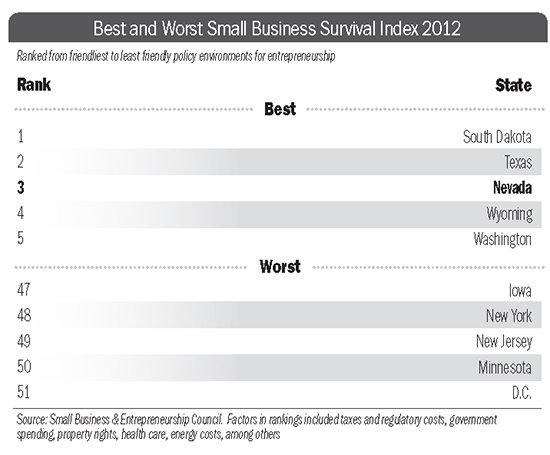