You are here: Home / Features / Building Nevada / Heart of Our Cities: A Look at Nevada Downtowns 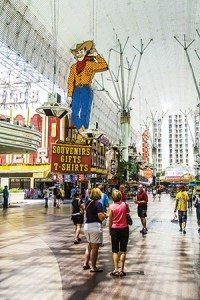 Downtown is the heart of a city. Traditional wisdom states that a healthy center reflects a healthy community. For a city to thrive and prosper, downtown needs to be a draw for visitors and residents alike.

Economically, a robust, vital midtown attracts businesses, which in turn employ residents and pumps money into the economy. A healthy downtown creates sustainability, as new and expanding businesses feel encouraged and confident about locating in the city. A vibrant, healthy city center can create a sense of place and pride in the community.

“A good downtown has that hometown feeling,” said Mayor Chris Johnson, Elko. “It really sets the tone and culture for a community. It presents the opportunity for people to evaluate how a community is doing. When they come into the downtown and it’s vibrant, you get a feeling the economy is good.”

Downtown, Wandering All Around

In U.S. cities, two trends have become apparent in recent years. The first is downtown revitalization. Between 1990 and 2000, urban areas across the country began looking at ways to breathe new life into their downtowns. From adopting “Complete Streets” transportation policies that incorporate pedestrian and bicycle traffic into city street planning, to bringing arts and culture and special events into downtown and creating redevelopment agencies to manage funds for renovation, city planners have worked to bring people downtown.

The second trend is exactly what city planners hope for: an influx of residents into their downtowns. The 90s motto of many communities – live/work/play – is being taken to heart as people make their homes in downtown areas. According to the U.S. Census Bureau, between 2000 and 2010, downtown areas in cities with 5 million or more residents experienced double digit residential growth.

Nevada cities are somewhat smaller than 5 million residents, and the 2008 economic downturn hit Nevada harder than many other states. Unemployment numbers rose into the mid-teens. By January 2012 Nevada had led the nation in foreclosures for five straight years, and in April of this year returned to the top of the foreclosures charts.

All of which makes it harder for Nevada downtown areas to thrive. According to Mayor Geno Martini of Sparks, things have been fairly quiet in downtown. “It’s been very difficult since the recession to get any commitments from people to build down here.” The City, working with the Sparks Nugget, has been marketing downtown, hoping for retail and restaurants, and while things have been slow, they may be looking up.

Sparks is fortunate to have a city council that understands what the city needs and is conservative in spending, said Mayor Martini. With monies coming from the Legislature for capital improvements, “We’ll be able to sit down in a workshop atmosphere and crunch numbers to see what we can do. We don’t want to create anymore debt down there because revenues aren’t good enough to create anymore debt.”

Some of those improvements might include an events center on the plaza, something small for concerts and special events, and an ice skating rink for winter. One current bright spot in Sparks is the Silver Club which reopened its doors this month as Bourbon Street Casino, bringing a little bit of the French Quarter to town.

What Makes a Great Downtown?

“You need to know your identity as a community,” said Mayor Roger Tobler, Boulder City. “Then you can figure out what your downtown should be.” For Boulder City, that’s a thriving small town with historic features and healthy businesses. Boulder City has embraced the “Complete Streets” idea, working on a beautification project through its redevelopment agency to landscape downtown and tie the walking trails into the business core. “It’s a small town atmosphere with mom and pop shops and some historic aspects.”

Boulder City was created around the Boulder Dam Hotel and the Boulder Dam Museum. It was a federal company town during the building of the dam, and has kept many historic aspects. What’s new are the wineries, breweries and restaurants that have come to town in the past few years.

The upkeep of older buildings in a small town can be a challenge. Boulder City offers 30 percent grants to businesses improving brick-and-mortar businesses and other incentives to try and keep businesses downtown. Keeping businesses from sprawling outside downtown isn’t as difficult for Boulder City as other areas where there’s more land available for sprawling. Keeping the businesses downtown helps the economy, as those that receive grants also put their own money into the community, increasing the value of the redevelopment area. In addition, the way utility rates are structured for businesses helps keep utilities rates lower for residents.

Because downtowns are the heart of cities, it’s important to remove barriers to investment for small businesses, said Debra March, councilwoman, Henderson. March also serves as board president for the Nevada League of Cities. She added that, the majority of conventions and events that take place in Henderson happen in downtown, driving visitation, lodging and more investment opportunities.

Driving both pedestrian and vehicular traffic to a city’s downtown encourages commerce, but some cities face specific challenges. For Carson City the challenge is making the city’s downtown area pedestrian friendly and a place to go to, as opposed to a place to go through, said Mayor Robert Crowell. Once the new I-580/U.S. 395 bypass goes around the city, the resulting drop in traffic through downtown may also mean a drop in economic activity in terms of tourism.

“There needs to be a way to make people want to get off that freeway,” said Mayor Crowell. Road signs now welcome visitors to the city’s historic district. “You have to entice people to partake of the amenities of your city.”

It’s also important, Crowell said, that changes and plans be coordinated with the entire business community. “Not all areas grow at the same time, or they may grow for different reasons, but you have to have an overall plan for how you want your city to grow and coordinate having a healthy downtown with the rest of your community.” Under discussion are plans to widen downtown sidewalks, landscape the city center and remove the fences along the street that some business owners perceive as keeping people out of local businesses.

The mining industry shielded Elko from some of the effects of the recession the rest of the state experienced. As the city prepares to celebrate its 100th anniversary in 2017, Mayor Johnson said, “Having a community that’s been standing for a long time and looking good and caring about the general area and the downtown, that shows a community that has hometown pride.” All communities do, Johnson said; some are just blessed with stronger economies than others.

The ability to walk through downtown, for residents to live, work and play, and to attract visitors, is another trend for downtowns. Parking is always a concern – Elko has dedicated land, once used by railroads, for parking and has changed Idaho Street from four lanes to three, widening parking areas so car doors don’t have to open into traffic.

Las Vegas felt the effects of the recession and kept going anyway. In spite of the economic downturn, a new City Hall was built, using Build America bonds. The project cost $185 million and is seven stories tall, a LEED gold-certified green energy building that saves some $400,000 annually in energy costs. There’s also a new Valley Water District building, and a new U.S. Citizenship and Immigration Services building built with federal dollars. The Smith Center for the Performing Arts came to life during the economic struggle, and Simon Property Group’s Las Vegas Premium Outlets mall is expanding both shops and parking.

“It speaks of Las Vegas and how we’re always recreating ourselves and doing something new and something different,” said Mayor Carolyn Goodman. “It appeals not only to tourists but residents. They come into the heart of the city and get together and share an experience, a concert, a ballet, or Broadway show, or they bring their children to the Discovery Museum. It’s a gathering place, what the city should mean to the community, and it’s gained momentum for us.”

Keeping the Lights on Downtown

Cities tend to spread out from their original downtowns. New areas build up, newer technology spreads outward with new growth. But careful planning and special events can bring residents, visitors and businesses back.

“I think we’ve already moved out from the core,” said Mayor Martini. But Sparks’ downtown, with family focused special events, retail and restaurants, is a traditional downtown. “It’s important for a city our size to have a place for people to go and congregate in a nice, clean area downtown.”

In Vegas, Tony Hsieh, CEO of Zappos.com, has pledged $350 million of private funds to the Downtown Revitalization Project, the funds to be spread over five areas: real estate, residential, small business, education and startups. So far the project has created 483 jobs.

The Fremont Street Experience continues to draw visitors and residents alike to downtown for entertainment including Viva Vision, 12.5 million LED modules on a screen that extends the length of five football fields and a 550,000-watt sound system.

Cities need to be flexible to keep businesses downtown, said Mayor Bob Cashell, Reno. Helping out with renovation projects, providing re-development agency funds where appropriate and possible, or grant monies, can help. “You can’t do much for them to help with taxes, but maybe some of the rules can be lightened and changed to help older buildings stay remodeled and fixed up.”

When the recession hit, Reno was already revitalizing downtown, creating condos downtown and energizing a vibrant arts and culture district along the Truckee River. “We have the retail and art galleries and restaurants and there’s our Triple-A baseball team and the white water rafting course. People look at a vibrant downtown and that [vision] spreads throughout the whole city,” said Mayor Cashell.

Reno has also replaced the old paving stones on downtown sidewalks, put in a movie theater along the river and encouraged small, unique businesses to locate in the city center. But there are also several properties downtown that need to be torn down or built up, said Mayor Cashell; older properties whose owners aren’t interested in selling or remodeling.

In addition to wanting to see Reno’s older properties fixed up, Mayor Cashell would also like to see the City working more closely with the University of Nevada, Reno.

“There’s nothing more high tech in our community than our University, and I’d like to see the officers or classrooms come on the other side of the freeway. We’re a University town, and acknowledging that can bring in quite a few businesses and grants.”