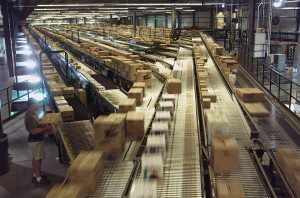 In an effort to diversify Nevada’s economy away from over reliance on travel and tourism, hospitality and gaming, economic development authorities throughout the state continue to work to find the perfect industries for Nevada’s business-friendly tax climate, wide-open spaces, multi-modal transportation systems and easy access to the 11 western states.

One of those sectors, logistics and operations, is uniquely suited to Nevada, especially Northern Nevada with it’s east-west highway access, rail, trucking and air cargo abilities. Now distribution centers – essentially the warehousing and transportation step in the supply chain and logistics arena – and fulfillment centers, a.k.a. e-commerce, the Amazons of the world, are finding a foothold in Nevada, to the benefit of the state’s economy.

One of the factors driving distribution center business Nevada’s way is the new political situation in California and its ever-evolving tax structure. “With the steadily improving economy, and the change in tax structure in California, you’re seeing more and more distribution centers coming here as EDAWN and other economic development authorities continue to market Northern Nevada and the general region and people are understanding what’s here and getting the idea,” said Brian Pratt, director of air service and cargo development, Reno-Tahoe International Airport. “It makes sense that they’re coming here because of the location – look at where we are, we’re essentially on the west coast. You can service, even distribute to, the west coast and all 11 states within one day truck-trailer time. We’re talking about 62 million customers you can tap into.”

One of the principal advantages for Northern Nevada is the I-80 corridor and a system of roadways that puts distribution centers within a one-day drive of a market of 51 million. According to a study commissioned by the Governor’s Office of Economic Development, created by RCG Economics, along the I-80 from San Francisco to Cheyenne are population centers including Sacramento, Reno and Salt Lake City.

It’s not just freight that distribution centers need to move through the Northern Nevada airport; access to customers and passenger flights are a huge benefit along with the fact that the airport has FED EX, UPS and DHL on site.

“Just for example, last year 116 million pounds of cargo came in and out of the airport and while the economy has been a little bit flat, if you will, generally speaking our cargo numbers continue to increase for the last three years in a row and every market except one has been up considerably,” said Pratt. “We’ve been up nine out of the last 11 months.” Cargo flights help keep the costs of passenger flights low, another win-win for businesses locating in Northern Nevada.

“Las Vegas is a little different than Reno because even though proximity to California is a positive, companies that want to be in Las Vegas want to be there for reasons related to resorts or to serve the population,” said Doug Roberts, partner, Panattoni Development. “We don’t see as many regional or western distribution centers in Las Vegas.”

Largely Southern Nevada has long been an importer rather than an exporter, bringing in goods to supply the resort and entertainment industries. There aren’t many regional distribution centers located in the Valley. T.J. Maxx has a distribution center and Global Experience Specialists (GES), a company which creates events around the world, has some 800,000-square-feet.

Southern Nevada has its own strengths, from its proximity to Southern California ports in San Diego, Los Angeles and Long Beach, to Interstate 15, built to carry truck traffic.

The healthiest part of the industrial real estate market in recent years has been the big box buildings, according to Roberts. These are 2-, 3- and 400,000-square-foot facilities and supply and demand means in Southern Nevada there’s almost no space available. Many properties currently are build-to-suit, tenant-owned facilities and there’s discussion that speculative building of big box facilities may start up in the next 12 to 18 months.

Historically Southern Nevada hasn’t been known as a big box market, according to John Ramous, vice president, regional operations, Harsch Investment Properties. “When you say big box that’s the Inland Empire in California that’s known for that, or even Phoenix. Those boxes can be over half a million square feet and there’s probably only a half a dozen we can identify in Southern Nevada that were built in the past and primarily those are tenant-specific,” said Ramous, referring to the customized 800,000-square-foot GES facility and Levi Strauss’ half a million-square-foot building near Henderson.

Lower prices on land in Southern Nevada over the last three or four years helped Nevada look toward exporting as well as importing to serve the resort and population needs. Now that the Valley’s rates and land are a bit more competitive, there’s a chance to compete with the Inland Empire – Long Beach, California, with its millions of square footage of distribution centers – and the Phoenixes of the world. “We have come on the radar screen and there have been numerous inquiries in the past three to four years (from companies looking to distribute from the area),” said Ramous. But the question is really how many can come here given the supply and demand situation for big box facilities.

An inland port is a rail or large terminal linked to a maritime terminal with regular inland transport services. They’re made up of large, big box distribution centers served by rail, truck and air. The Governor’s Office on Economic Development (GOED) commissioned RCG Economics to study the feasibility of inland ports in Nevada.

“Long story short, it’s difficult to prove that they could be successful here because we probably are too close to Long Beach and their success there to truly capitalize on a true inland port,” said Ramous. “But in the future with I-11, there are opportunities for us to identify some large pieces of land that could potentially cater to a small area that could house larger buildings.”

Inland ports would be cool to have, Restrepo said, but essentially not feasible yet. In GOED’s study, Nevada turned out to be too close (within 500 miles) to the California ports for rail to be economically feasible, and too far for trucking to be competitive.

“We just need to understand what our competitive advantages are compared to where we’re located, what our road, rail and air transportation system is like,” said Restrepo. “How do we look at all those advantages and use them to the highest and best use, take the best advantages of what we’ve got and avoid going down the road of things that look cool but which we have no competitive advantage for.”

Economic development authorities made the decision to play to Nevada’s strengths, which includes advantages in Southern Nevada relative to the road network, access to Southern California, a great airport and the upcoming advantage of I-11 which will link Las Vegas and Phoenix. Future distribution centers may choose to locate along the proposed I-11 route. Past Boulder City the land along the interstate is federal land, but in the vicinity of the city there’s room for growth along the upcoming major arterial.

Another recent addition to Nevada’s highways is the I-580 bridge, a section of U.S. 395 that bypasses downtown Carson City. “The new interstate between Reno and Carson City has improved safety and reduced travel time between Reno and Carson City,” said Rudy Malfabon, director, Nevada Department of Transportation. “Travel time is very reliable between these two cities, which is particularly important to commuters and businesses that move freight.”

Nevada needs to identify the niche areas within supply chain and logistics that fit the state’s strengths. Working toward our strengths is important for the state’s future economy because the future of distribution isn’t standing still. Currently the government of Panama is in the process of improving, widening and deepening the Panama Canal and once that’s finished, super freighters (along the lines of supertankers) will be able to bypass West Coast ports with shipments from Asia.

“It doesn’t end there,” Restrepo warned. Panama’s government is also in the process of deepening its own harbors and port facilities in order to accommodate the super freighters itself and service Europe. “There are a lot of things going on in the transportation/logistics world we need to be aware of. We’re now competing in the global market, not just against California or the East Coast, so now we have to understand how we best compete.”

The Perks of Nevada

Even with the changes in logistics and supply chain transportation looming, interest continues to build from companies looking to locate distribution centers in Nevada. As tax rates and regulations continue to change in California, the state remains a popular alternative.

“Look at the cost of living and the ability to have a place to call home, that’s going to be much more efficient than being in California or being in the Inland Empire and I think the state has really done a good job lining things up and highlighting the advantages,” said Jim Tainter, senior vice president, regional manager, Harsch Investment Properties. “Not that we don’t have our challenges, but straight up marketing against California’s business model is the best place to start.

“I applaud the state capital for taking a very long-term view of other economic clusters that are available and trying to develop them economically so that we can diversify our economic base. I think that’s going to be a longer road than people would like to see, but we need to get on that road now so that we see the fruit of those labors 10 to 15 years from now. We weren’t at one point, but we’re a distribution center now,” Tainter added.