You are here: Home / Features / Special Reports / CCIM Southern Nevada: The Art of the Transaction 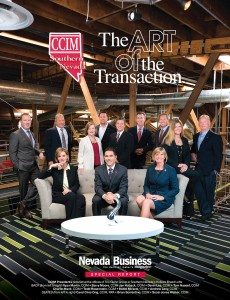 More than 15,000 commercial real estate professionals have earned their Certified Commercial Investment Member (CCIM) designation, considered by many to be the master’s degree equivalent in the real estate world. The CCIM designation is the mark of a professional and signifies elite status in the professional community. Membership creates access to networking opportunities, outreach and continuing education and garners referrals from brokers across the country.

“When you’re part of the chapter, networking opportunities open up,” said Eric Tischler, CCIM Southern Nevada newsletter chair. “There are networking opportunities with top professionals in the field and not only in commercial real estate. We have architects, title companies, and pretty much the top notch tier of industry in one room once a month.”

“When CCIM members work together you speak the same language, and that makes getting the deal done easier and protects your clients at the same time,” said Jarrad Katz, CCIM, senior vice president/principal, MDL Group. Members in the network close thousands of transactions annually, with a combined value of more than $200 billion. There are CCIM chapters around the globe, with education courses offered in the U.S., Canada, Egypt, Korea, Taiwan, China, Mexico, Russia, Poland and Singapore.

In Southern Nevada, the CCIM community is still relatively small. For a city of 2 million, there are approximately 75 professionals with CCIM designations.

Earning the CCIM designation requires completion of four week-long classes and an online ethics class before taking a six-hour test, which takes every minute of those six hours, according to Katz.

Candidates also prepare a portfolio highlighting a minimum of 10 deals equaling $5 million or more in value, with an explanation of how the deals were put together using CCIM tools. “It’s definitely not for the faint of heart,” said Katz.

“For some people it takes 10 years to get their CCIM designation,” said Chris Richardson, CCIM of The Equity Group, though fast-track options can reduce the time. Richardson got his designation in a year and considers it a seal of approval – the CCIM designation on a business card is instantly recognizable to other professionals in the industry.

The designation indicates a professional who has the desire to better his or her skills and seek a standardized level of professionalism. “For a client, they’re looking at you saying, ‘Wow, you really wanted to do better in your career, so you spent the time and money, you’re obviously committed to what you’re doing,’” said Marlene Fujita Winkel, CCIM, CB Richard Ellis.

“Having the designation adds outstanding credibility to the understanding and knowledge of what it takes to represent your client and move them through the transaction, be it lease acquisition or disposition,” said Carol Cline-Ong, CCIM, RPA of MDL Group. The education and skill sets gained smooth the way for working on all facets of transactions – financial components, deal points, everything from the financial side to the marketing side to the investment side.

CCIM is a recognized distinction in the commercial real estate world and a community where peers reach out to each other and competitors find a way to work together for the good of the deal and the good of the client.

Carol Cline-Ong finds CCIM important enough to serve in a board position as candidate guidance chair; this in addtion to an already busy schedule. She’s also past president of the Southern Nevada chapter CCIM Board of Directors.

“Because of the knowledge and the integrity [of a CCIM] you know you’re dealing with top notch, seasoned, knowledgeable individuals in the industry, and that you’re doing it right,” said Cline-Ong.

The commercial real estate market has changed in the last five years. In 2008, transactions were bigger both in size of properties and in the financial aspect. Then came the recession, and the market changed.

The market is turning around and improving. Following an uptick in 2011 and 2012, 2013 continues to see the number of transactions in Southern Nevada picking up on the lending side.

“We have refinances and purchases,” said Adam Gregory, CCIM, CommCap Advisors. “For two or three years we didn’t do a purchase transaction, and now we’re seeing a lot more purchase transactions in the market, especially if you look back to where we were in 2009-2010.”

Interest from investors and transaction flow have both increased significantly over the last quarter, according to Gary Banner, CCIM, Colliers International, who expects real estate professionals who invested in their education and skills during the downturn will be the first to see positive results as the market improves. “Those designees and candidates that are members of Southern Nevada chapter CCIM who persevered through the downturn of the local market will now begin reaping the rewards of their dedication to this profession,” said Banner.

In the changed and still-changing commercial real estate market in Southern Nevada, Ryan Martin, CCIM, Colliers International, found that, while the overall size and values of transactions he’s been involved in haven’t gone up – to the contrary, he said, the market shifted in the opposite direction. The caliber of clients and the caliber of actions, aside from monetary value, have increased.

“The designation instills the skills that our clients are looking for and delivers a certain understanding of the transactions, which allows us to be a little more confident in the delivery,” said Martin.

“We believe there is money out there and knowledgeable seasoned investors are once again entering our arena. We believe that tenants are renewing and expanding cautiously,” said Cline-Ong.

Colliers’ quarterly market reports show positive absorption over the past year, that rents have stabilized but not gone back up, and that vacancy is slowly diminishing. “We’re seeing a few projects being finished and some true net absorption taking effect,” said Martin.
The number of calls from small to mid-size California companies has picked up, as taxes in California drive business owners to find alternatives, and industrial and office space vacancy absorption has picked up.

“People are very interested in what’s going on in Las Vegas. We’re a resilient city. We’ve taken our knocks, but the reality is we’ve persevered and have become better at what we do. We’re working smarter and it’s paying off for the brokerage community, that has continued to work hard and reinvest in themselves,” said Cline-Ong.

Adam Gregory is the CCIM Southern Nevada chapter designation promotion chair. His committee focuses on educating new commercial real estate professionals about the benefits and prestige of the CCIM designation. Gregory’s own experience illustrates the benefits: as a young broker he called repeatedly on a client whom he wanted to do business with. When the client, who had been in the business for 30 years and had gone through the program in the ‘60s, noticed Gregory’s designation, it opened the door with a very large office developer. “Developers in our market know the number of transactions you have to do to get the designation, and the professionalism of CCIM.”

Ryan Martin at Colliers reports the recent lease of a five-story office building consisting of 86,542-square-feet on a 132-month lease. Martin also assisted in the lease renewal of Gordon Silver Law Firm in the Hughes Center who signed a 144-month lease on 55,162-square-feet. On the sales side, Martin was involved in the sale of a two-story office building which sold in December of 2012 for $4.8 million.

One of Sun Commercial Real Estate’s larger transactions that garnered attention recently was the sale of a large retail center on Blue Diamond Road. A real estate owned (REO) property, it was 65 percent leased and had a mix of national and local tenants. “The price we were able to achieve on the sale was a really good price on behalf of our seller,” said Cathy Jones, CCIM, president, Sun Commercial and president-elect of CCIM Southern Nevada’s chapter.

Using tools provided by CCIM training, they were able to educate the buyer and do a discounted cash flow analysis and create a win-win situation for buyer and seller. “Instead of just presenting the property based on a set price, we were able to present it based on the returns the buyer would be able to achieve because we could explain the numbers. We’ve stayed in touch with that buyer and they’re actually doing very well with the property,” said Jones.

“I believe the biggest benefit to being a CCIM is the education base that gives you the confidence to conduct your business professionally in the marketplace,” said Banner, who, at press time, was waiting for the close of a $475 million dollar deal, a 346-unit apartment complex.

Transactions are changing in the 2013 market from the refinances of recent years into purchases. “We had a lot of cash buyers coming in to take down properties, get them a little more stabilized, and now they’re coming to us looking for financing on those properties,” said Gregory.

Brian Sorrentino saw a foreclosed restaurant sale, a two-phase deal that required the sale and lease back from bank to tenants, and phase two the disposition from the bank of the assets. Chris Richardson reported a recent large transaction, The Glenn Group’s move into the 12,000-square-foot Holsum Bakery building on the west edge of Las Vegas’s new arts district off Charleston (cover photo).

“There was a lot of CCIM knowledge involved in that transaction, market analysis, rent evaluation to investment and ultimately disposition,” said Richardson. “Since earning my designation I can use the tools I was provided to help analyze and assess a lease or investment or disposition to minimize risk for my client. With that knowledge I’ve been able to secure and close a lot more quickly than I did with deals before the designation. There were a lot of pieces of the puzzle missing.”

Can earning a CCIM designation help a commercial real estate professional succeed? “We share details on how to successfully get transactions completed and there’s a little more sharing of referrals between CCIM designees,” said Martin.

Is CCIM a necessary qualification? “No, but I do think that any broker, especially if they’re more into the analysis portion of the financials and understanding the numbers and financial statements, I think it does provide an added benefit,” Martin added.

Are CCIM designees the best deal-makers in the industry? Not necessarily. “I think there are really great deal makers in the industry that are not CCIM,” said Sorrentino. “Do I think that they would be better being a CCIM? There’s not a doubt in my mind. Do you need to be CCIM to be a top deal maker? No. But are you going to be more efficient, have better knowledge and be able to make better deals because of CCIM? Yeah, I believe you are.”

“I had some doubts [before earning CCIM designation] but it’s one of the best experiences I’ve had in this industry,” said Sorrentino. “From an education standpoint, and a networking standpoint, and a confidence standpoint, there isn’t another program that provides you with the tools that CCIM does to make you more effective at your job. So anybody could benefit from it and I can’t imagine why more people don’t do it.”