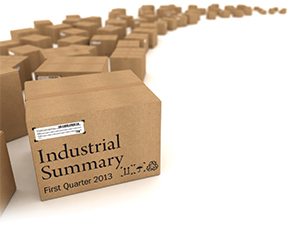 The Las Vegas industrial market reported a meaningful decline in vacancy rate, falling to 17.2 percent during the first quarter of 2013. Compared to the prior quarter, vacancies are down 50 basis points (0.5 percent), while compared to a year ago, they are down 70 basis points (0.7 percent).

Approximately 690,600 square feet of positive net absorption was reported in the industrial sector during the first quarter of 2013, attributable to a number of significant lease transactions and recent non-speculative building completions. The latest quarter represents the highest amount of net move-ins since the fourth quarter of 2008.

With the completion of three projects, totaling 160,000 square feet during the period, construction activity declined slightly to 910,000 square feet. Two projects totaling 730,000 square feet remain under development in the southwest submarket.
While the latest performance is not necessarily an indication of future trends, there is some renewed optimism for the industrial sector. Given the length of the contraction in the market during the post-boom timeframe, the sector will require a number of years whereby demand outpaces new supply to reach back toward historical averages. Based on current availabilities, approximately 11 million square feet of positive absorption would be required for the vacancy rate to reach its pre-recession level of 6.5 percent.

The Reno market is pointed in the right direction toward slow, steady growth. The year began with 13.6 percent vacancy and we remain there today. When sublease space is excluded, direct vacancy sits at 11.73 percent. The neutral net absorption number for the quarter does not reflect the positive activity throughout the markets. Although positive absorption was expected, a neutral first quarter this year is better than the first quarter of the prior three years which recorded negative net absorption and an increase in vacancy.

There were two large transactions over 100,000 square feet completed in the first quarter. The transaction quantity was spread evenly between small, medium, and large deals which is a sign of market health.

Net absorption for the quarter was 5,190 square feet. Average annual net absorption over the past 13 years was 1,428,705 square feet. The market has not been able to exceed the average since the recession began.

At this point, rental rates have not headed higher, but expect an increase in rents for some products types in the near future. There are a number of large users inquiring or touring the few remaining class A buildings for lease.

Purchasing remains attractive for users looking for value and investors looking for return. Market optimism is increasing. There are still some major government fiscal concerns on the horizon, but for now it appears that the headwinds that slowed out the market have turned to tailwinds fueling it.

Go to the View Issues 2013 page and click on May 2013 to view this article with accompanying statistics.