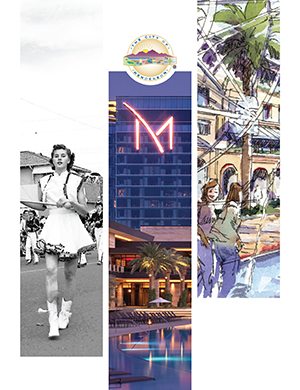 Incorporated in 1953, Henderson, Nev. was born “in America’s defense” with the building of the Basic Magnesium Plant in 1943 during World War II. The plant supplied the U.S. War Department with magnesium for munitions and airplane parts that would eventually help the United States and the allies win the war.

Today, Henderson is a far cry from the small industrial center it once was. And yet, Nevada’s second largest city still exemplifies the can-do spirit and industrious environment it’s always had. It’s one of the nation’s premier communities, supported by a high quality of life and a diverse economic base that extends from health care to manufacturing and distribution.

As Henderson celebrates six decades of growth, it recognizes some of the largest sectors that have made it a great place to live, learn, work and play.

Economic development and education have always gone hand-in-hand. Having an educated workforce is critical for a community to thrive and become more diversified.

When businesses consider relocating or expanding to a new city, a good education system that’s graduated an educated workforce is one of the first things they look at; they want to ensure they have a vast, qualified hiring pool from which to choose.

Luckily for current and potential Henderson businesses, the city has nearly 270,000 residents whose educational attainment exceeds that of other major Nevada cities. In fact, 31.2 percent of Henderson residents hold a bachelor’s degree or higher – a higher percentage than other major Nevada and Arizona cities.

Today, Henderson is home to 12 colleges and universities offering more than 75 programs and majors in areas as diverse as medicine; arts and culinary training; electronics and computer technology; pharmaceuticals studies; and business, to name a few.

One of those higher education institutions is Roseman University of Health Sciences, which recently purchased an additional eight acres on which it plans to expand.

“The City of Henderson has been a significant and supportive partner of Roseman University since our founding 15 years ago,” said Roseman President Renee Coffman, PhD, RPh. “The city has readily acknowledged the value of having higher educational institutions locate in the city and has been helpful to Roseman through the unparalleled growth and expansion we’ve experienced in the short time of our existence.”

In Henderson, health is taken seriously. It’s been a tradition since Basic Magnesium Hospital – now St. Rose Dominican Hospital-Rose de Lima Campus – opened in 1942. In the 70 years since, Henderson has welcomed the opening of Roseman University of Health Sciences, Nevada State College and Touro University – all geared to strengthen the level of health care in Nevada.

The City of Henderson is credited with bringing the institutions to Henderson. Touro University alone has had an economic impact in excess of $300 million since 2004.

“I’ve worked with a lot of different cities in my career, and I haven’t seen the level of assistance the city of Henderson has provided,” said Dr. Michael Harter, senior provost and CEO of Touro University. “It’s incredible.”

With strong medical personnel come strong facilities. In the years since Henderson’s first hospital, St. Rose Dominican Hospital has opened the Siena Campus in 2000 and San Martin Campus in 2006.

The Siena Campus was presented with the 2011 HealthInsight Quality Award for demonstrating high quality health care and excellence in performance on publicly reported quality of care and patients’ perception of care measures. The HealthInsight quality report also ranked the three St. Rose hospitals in the top five in Nevada. AARP Magazine reported in 2009 the Siena Campus was one of the 125 best hospitals in America.

Construction on a 220,000-square-foot, five-story tower at the Siena Campus will begin in April with completion set for summer 2015. The expansion will include 100 private rooms, as well as expansion and remodeling of the neonatal intensive care unit and emergency department and 700 additional staff positions. The four-story parking garage, currently under construction and set to be completed in April 2013, will add 500 additional parking spaces.

Every year, Henderson welcomes residents who were glad to leave the city from which they came for warmer weather and a better lifestyle.

The proof is in the rankings. Henderson was the only Nevada city to be ranked on Money magazine’s “100 Best Places to Live in America” list. The 2012 ranking made it the third time the city placed in the top 100 based on economic strength, quality health care, low crime, great schools and available family-friendly activities. The city was also recognized in 2006 and 2008.

BusinessWeek also thought Henderson was a good place to live, as it ranked the city 38th on its first “America’s 50 Best Cities” list. Ranking was based on the number of restaurants, bars and museums per capita; the number of colleges, libraries and professional sports teams; the income, poverty, unemployment, crime and foreclosure rates; percentage of population with bachelor’s degrees of higher; public school performance, park acres per 1,000 residents and air quality.

Henderson also makes the top of the Forbes lists. In 2011, the city was named one of the 25 top suburbs to retire, as well as second on the list of “America’s Safest Cities.” And while residents complain about driving conditions in other parts of the Las Vegas Valley, Henderson ranked 70th in the eighth annual 2012 Allstate America’s Best Driver’s Report. The only other Nevada city ranked in the top 100 was Reno.

Recreation is a big part of the lifestyle Henderson residents enjoy. An award-winning parks and recreation department, as well as close proximity to Lake Mead National Recreational Area, Red Rock Canyon and the River Mountains Loop Trail and events such as the Super Run Classic Car Show, Ironman World Championship triathlon and entertainment at the Henderson Pavilion, add fun to life in Henderson.

“The values in Henderson are the lifestyle choices offered here and the opportunity to grow businesses here,” said Jeff Saffer, president of Quertle, a biomedical literature search engine. “This is definitely our future home for the company.”

It’s not yet Silicon Valley, but Henderson is quickly gaining status as a home for technology companies. According to a 2012 study by OpenForum.com, the south end of the Las Vegas Valley, which includes Henderson, has 3.9 technology startups per 100,000 people, which ranks it sixth in the nation behind cities in Northern California, Arizona and Texas.

Technology companies move to Henderson every year for the healthy tax base, economic environment and the weather, which is free from threats of many natural disasters, giving technology firms safe havens for their data storage.

Successful companies such as Vadatech, FDM4, International, Aldec, K2 Energy and Datanamics, along with emerging startups Human Link Software, Lucine Biotechnology and Quertle, are helping to carry on a good name for Henderson in the tech community.

“I think it’s a great opportunity. There’s a lot of space to have tech-based companies,” Saffer added. “Without the support from the city, it wouldn’t happen.”

The Henderson Business Resource Center, operated by the Henderson Chamber of Commerce, gives companies a place to get started on their entrepreneurial efforts. And there is plenty of room for technology. In fact, it’s where K2 Energy got its start in Henderson. Recognized by Inc. Magazine in 2011 as number 79 on its fastest growing privately held U.S. Companies list, K2Energy has worked on futuristic projects such as the electric Shelby Cobra EV, Chevy Aveo EV and Ebike.

“Technology is the future of business in Henderson. It’s a big part of the economic climate the city has produced,” said Scott Muelrath, president and CEO of the Henderson Chamber of Commerce. “We’re excited to welcome more technology firms of all types in the future.”

For quite some time, Henderson has been anchored by a diverse base of manufacturing and logistics companies such as Levi Strauss & Co., Ethel M. Chocolates, Ocean Spray, Berry Plastics, Timet and Good Humor-Breyers Ice Cream. On the horizon, Henderson anticipates accommodating additional businesses in these sectors as new business parks begin to take shape.

The South 15 Airport Center is one of the first major projects to take shape and will commence this year.

The 150-acre, master-planned office and industrial park will be located between the Henderson Executive Airport and the M Resort. The footprint includes 14 buildings, between 33,000 and 400,000 square feet each, with a total of 2.2 million square feet.

The project will be completed in three to four phases with the first phase finished in late 2013 and the second in mid-2014. The first occupant will be a Fortune 100 company, and the name will be released once all contracts are finalized, said Doug Roberts, partner with Panattoni Development Company.

“We’ve laid out a plan,” Roberts added. “We’re going to tailor those buildings to the tenant or the buyer.”

The Las Vegas Valley’s south end will continue to attract business because of its proximity to Southern California and McCarran International Airport. The land value and location, coupled with the ease of doing business with the City of Henderson, will draw more companies and projects in the future, Roberts said.

South 15 Airport Center has the ability to produce “hundreds, if not thousands, of jobs” for the local economy, Roberts added.

“It’s an opportunity for us to bring good jobs to the Henderson area just to have the land available to us,” Roberts said. “I think the future is an employment base for the city that’s sustainable. You can’t beat the location, and companies will want to be in the area because of that.”