You are here: Home / Features / Feature Story / See You in Court: Business Litigation in Nevada 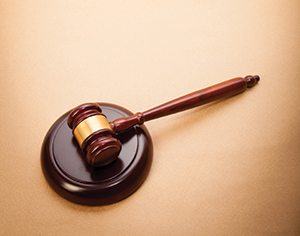 Conventional wisdom says that when the recession hit in late 2007, lawsuits between businesses probably increased as companies tried everything to stay afloat, including collecting all debts owed and enforcing contractual agreements.

But many attorneys working in litigation saw a decrease in lawsuits filed in most arenas. Instead, there was a rise in alternative dispute resolution as business owners found ways to resolve differences.

“You don’t get litigation in a bubble, you have to have some kind of transaction that happens first,” Rugg said. “An agreement or a merger or your basic kind of contract for services. And when you have that kind of transaction volume there, eventually there will be a dispute over it.” Then it’s a question of how parties to the suit choose to resolve differences.

John S. Delikanakis, partner, Snell & Wilmer, has seen significant changes in the legal landscape. With virtually no new businesses coming online there were fewer business litigation cases going forward, but breach of contract suits still occurred, not because businesses didn’t want to live up to contractual obligations, but because in many cases, they couldn’t.

“So you have a lot of litigation where you’re kind of chasing scraps,” Delikanakis said. “You’re just trying to get what you can in a down market where you’re chasing once very wealthy people who have guaranteed certain contracts, often large commercial loans, and are now being asked by lending institutions or other people who lent money to make good on them.”

Receiverships were also up, on hotels, shopping centers and office buildings, placed by creditors when owners couldn’t make good on their obligations – what Delikanakis calls bad litigation. Good litigation is two solid companies engaged in a dispute, often for non-economic reasons. Bad litigation is two half-solvent entities fighting over whatever is left of a commercial enterprise.

In the hard-hit construction industry, many business owners wanted to bypass litigation, either suing or being sued, and end disputes quickly, according to Leon F. Mead II, partner, Snell & Wilmer.

“I think the recession played a huge part in the lack of litigation,” said Tara Newberry, partner, Connaghan Newberry Law Firm. “Alternative dispute resolution has been steadily growing, but definitely cost-conscious corporations big and small rarely had to think about the cost of litigating a case. Disputes haven’t stopped just because of the recession – it’s just how you go about addressing them has been augmented.”

When the economy is robust, said Pat Lundvall, partner, McDonald Carano Wilson, business leaders put energy and attention into chasing the next business deal. But when the downturn hit, and there weren’t a number of potential new deals on the horizon, many turned their attention to past deals, re-evaluating whether contractual obligations had been met and whether they’d gotten everything out of a deal they were supposed to. “They put more energy into chasing old deals and squeezing every last dime out of old deals that they could. That’s why I think you’re seeing a significant uptick in business litigation.”

The nature of that litigation may have changed. In a robust economy, a business owner might sue to prevent unfair competition or to enforce non-compete covenants. Those suits have actually dropped off and there’s been a corresponding rise in lawsuits filed to force companies to fulfill contractual obligations, or for breach of contract.

The threshold amount businesses looked to before filing suit changed during the recession, Rugg noted. Business owners who found themselves involved in a dispute looked at the amount of money involved and judged whether or not the suit was worth it. “During the recession, the number at issue in the dispute, the amount of money in the dispute, had to be higher to make it worth getting involved in litigation than it is now and certainly than it was prior to 2008.”

Another change involves the tactics considered acceptable. One of the bigger changes in litigation is that businesses are more willing to file bankruptcy as a tactic, and the individuals running the business are less concerned with the affect of a bankruptcy on their business’s reputation. “Now you find people who are willing to use bankruptcy as an everyday tactic simply to get relief, whether it’s appropriate or not,” Rugg said.

Bankruptcies also reduced the number of lawsuits filed between businesses because of the sheer inability to collect on a judgement even if the business filing suit prevails. Before moving forward with litigation, attorneys determine if the company being sued is financially solvent and has assets, Lundvall said. “Because nobody wants to spend good money going after bad.” A judgment that can’t be executed is useless.

The cost of litigation kept the numbers of lawsuits down, but as recovery takes hold, the number of suits is climbing.

“In my practice we’re seeing a little bit more activity as businesses tend to be a bit more profitable. We’re seeing less bankruptcies, so there’s a chance if a business obtains a judgment that they could actually collect on that judgment,” said Maximiliano D. Couvillier III, shareholder, Lionel Sawyer Collins. Some of those lawsuits appear to stem from actions that occurred mid-recession that business owners now choose to pursue.

Newberry noticed a shift in the last decade as business owners work to resolve disputes without going to court both to avoid costs of litigation and because alternative dispute resolution is better for the company’s image.

Construction offers a variety of dispute resolution tactics. On job sites, disputes may be settled by bringing superintendents together and then working up the chain of command until cooler heads simply state it’s not worth the time or money to fight and find a way to settle. Dispute resolution boards can be appointed at the beginning of a contract, or a “project neutral” can be appointed. This is typically a construction attorney or expert paid as part of project overhead to resolve disputes in an expedited fashion, said Mead. Those decisions aren’t necessarily binding, so if all parties can’t agree to them, they can move on to traditional mediation.

Legislation passed by the 2011 Nevada Legislature which went into effect in October of that year slowed foreclosures to a crawl.

“Virtually all of the banks stopped doing foreclosures for several months until they could figure out how to comply with the new law,” said Newberry.

AB 284 added stricter requirements to foreclosure law, requiring a notarized affidavit to be filed with any non-judicial foreclosure. The affidavit requires the parties filing to swear to personal knowledge regarding the foreclosure, something most bank employees couldn’t do and most bank officials couldn’t understand. Foreclosures nearly stopped while bank officials tried to figure out how their employees could sign the affidavits without risking criminal charges. Newberry expects a number of requests for clarity of the new law during the next legislative session.

See You in Court – But Not if We Can Avoid It

For most business owners, staying out of court is the public relations and bank account friendly choice. But how do you protect yourself from either needing to file a lawsuit or being sued?

Know who you’re dealing with, experts say. Make sure you know your suppliers and buyers, landlords and tenants. Since the recession, more businesses are, if not comfortable with the idea of bankruptcy, at least not overly concerned with the effect bankruptcy will have on their reputation.

To avoid being on either side of a suit, either as plaintiff or defendant, honor your contractual obligations is step one.

“That almost sounds ridiculous to suggest that,” said Lundvall. “A more pertinent recommendation might be to do your due diligence into the folks you’re getting involved in business deals with and try to properly document your contractual relationship and plan for the worst case scenario. Sometimes that planning phase and documentation phase can make the total difference between being successful or unsuccessful whether you’re the plaintiff or the defendant in litigation.”

Address problems sooner rather than later, Rugg said. Don’t be afraid to address them in a non-confrontational manner rather than letting them build into something that somebody’s going to file a suit over.

Spend the money up front to have an attorney perform a contract review before signing. “In general, businesses sometimes tend to seek an attorney when the proverbial wheel has fallen off the wagon and the relationship with another business partner or contractor has failed,” said Couvillier. Business owners should bring in an attorney at contract development who can help protect against potential pitfalls and problems in that contract.

Preventative medicine is the best choice, agreed Newberry, who suggests small businesses opt for annual checkups with their attorneys to make certain they’re in compliance with governing law. “Many times a business will start as a small venture and then it develops into a larger business and, because things are going well, business owners just continue to move along without legal guidance. If they would actually check in with an attorney who practices in those areas it would help shift and change some of the policies and procedures so that if there is some type of litigation, they’re in a good position for defense.” Even better, such check ups can help prevent the need for litigation at all.

“Construction companies can almost always expect disputes because construction contracts are pretty much the only contracts that allow one party mid-contract to change the terms of that contract and not be in breach of it,” Mead said. “That’s a change order. You get into fights over them. We joke about it – about blue paint is always more expensive than white paint and we can’t figure out why, but inevitably if the project calls for white and you change it to blue, you’ll get a change order for more money. Those are the kinds of things that drive disputes.”

Businesses need to have good document protection and destruction policies in place that are well thought out, appropriate to the industry and designed with an attorney’s assistance. “Because at the end of the day your ability to produce your evidence and in a method that is quick and easy will not only assist you in assessing any potential lawsuits but also in responding to demands for discovery if a lawsuit is actually filed,” said Delikanakis.

If a lawsuit is filed, preserve all documents pertaining to the deal or contract from which the suit stems. Whether they’re hard copy paper documents or electronic files and emails, there are important rules of evidence surrounding documentation. It’s important to make sure documents aren’t lost inadvertently.

“That could be very damning to the case,” said Couvillier. Reaching out to an attorney can help business owners figure out strengths and weaknesses and put them in a position to open up dialog with the other side or make their case stronger for litigation.

As lawsuits filed return to pre-recession numbers, taking steps to protect your business can mean the difference between see you in court and see you at settlement.