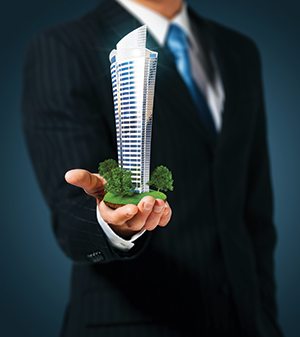 Nevada’s architects and engineers particularly were hard hit when the state’s residential and commercial real estate activities abruptly stopped and the recession began. Numerous firms downsized their staffs and operations. Economic conditions forced many of these professionals to leave Nevada for available jobs in other states or remain in the Silver State and pursue a different line of work. The remaining companies subsequently struggled to stay afloat.

“Market share for work for all of us shrank. We all got a smaller piece of the pie,” said Windom Kimsey, president of the architecture and planning firm, Tate Snyder Kimsey.

Today, five years after the start of the economic slump, a number have survived and some are even growing.

“Today, the firms that are still in business are the ones that are the real deal, consistently doing good work and who know how to run a business,” said Brent Wright, CEO of Nevada’s Wright Engineers.

Tate Snyder Kimsey (TSK) made it through the recession, albeit leaner as it lost about a third of its staff as a result. Today, it has four offices in Las Vegas, Reno, Los Angeles and, most recently, Shenzhen, China.

For 50 years, until the recession, the firm specialized in all public works projects, with about half in Clark County. Since the recession, it expanded its market, for instance, to include work for federal agencies and doing multi-family housing projects.

Its biggest change, though, has been adding international work—China. This came about when TSK participated in two U.S. Department of Commerce Gold Key programs, in which the agency facilitates meetings between U.S. businesses and potential partners or clients in a particular foreign country. As a result, today TSK is designing two high rises in China, one with office and residential space and an auto mall, the second, offices topped by a Marriott hotel.

“My ultimate goal is to see us working in multiple countries, as long as it’s feasible,” Kimsey said.

The types of architecture TSK is creating in China will afford it the experience and qualifications to do the same in the states in the future along with a competitive edge, he added.

TSK also is pursuing a new type of project delivery, public-private partnerships (P3), a proactive approach in which architects and their team of all necessary professionals approach and present a project to a potential client.

“It’s creating your own work,” Kimsey said. “I think we’re going to see a lot more of that.”

Newer projects include entering a competition for design of an office building in Shenzhen, a general services facility at the California-Mexico border crossing and a couple of design builds for the Bureau of Reclamation in Boulder City.

“Being busy is good,” Kimsey said. “I’d always like to be busier.”

When work on the McCarran International Airport’s Terminal 3 wound down and the Las Vegas Convention Center stopped work on its expansion project, Pugsley Simpson Coulter (PSC) felt it. This one-office (Las Vegas) architectural firm went from about 49 employees to the 18 it has now.

Founded in 1968, the firm provides services ranging from pre-design to construction administration.

In addition to Nevada, the firm is licensed in California, Arizona, Utah, Montana and New Mexico, Simpson said, but about 80 percent of current jobs are in the Silver State.

Work has been “pretty steady” for the past two-plus years, and its success rate with jobs bidding has jumped to about 50 from 10 percent, he added.

“Maybe it’s because we’ve been more focused and make the effort to really know what the project is before going after it,” he said.
The firm used the slower times to become efficient in three-dimensional, building information modeling software. The switch to 3D from two-dimensional design is a major shift for the industry, Simpson said.

Management has honed in on where the firm is most successful and where it can serve clients best. It’s worked harder at including employees and their input in all business aspects to keep them apprised of PSC’s direction and future.

“We feel like we’re more efficient, more focused,” Simpson said. “We took that downsizing as an opportunity to retool and be ready for what’s going to happen.”

The firm’s newer projects in Clark County include gate remodeling at the McCarran Airport; a private school, church and chapel expansion project for St. Francis of Assisi; expansion of Canyon Ridge Christian Church and a rehabilitation at Rose Warren Elementary. Outside of Nevada, the company is designing a youth sports facility in Mescalero, NM.

PSC has pursued work in Northern Nevada without much success, Simpson said, but continues to try. It is, though, working on an expansion for Lotus Radio Corp. in Reno.

Steven Miles, the founder/operator of Reno-based Miles Architectural Group (MAG) has seen work pick up in the last two years. His firm’s niche is custom residential design services, primarily in Nevada and California. In the boom time, he was designing about 30 custom homes per year. Clients encompassed three groups: smaller parties who wanted to build (one-third), spec builders (one-third) and well-off parties (one-third).

With the economic downturn, the load plummeted to about one to three homes per year, and the two groups, spec builders and smaller parties, disappeared. Three years ago, to cut expenses, Miles closed his commercial office and began working from his home instead.

Miles supplemented his income for the past five years serving as an expert witness for Nevada construction defects cases, working for the defense, which he enjoys and still does, he said. One case alone can require up to six months to a year’s worth of work.

“That was kind of a little bit of a crutch,” he added.

Now, MAG’s workload is back up to about four homes per year, 25 percent of which are in Nevada. “I’m not doing nearly what I was doing, but given the work that I do and the manpower I have (two part-time employees), it’s plenty,” Miles said. “I could probably put on a full-time guy, but I won’t. I don’t see any promise out there at all.”

Currently, he’s working on semi-custom homes in an existing development in Somersett, a master-planned community in Northwest Reno. Another project is designing duplexes in downtown Sparks under its new development code.

“That’s probably the most exciting one because of the way that it’s been taken in by the City of Sparks,” Miles said. “They’re excited and eager to see it done so they can use it as a model project for the new development standards.”

Wright Engineers is one Nevada firm that’s increasing both market share and business. It offers civil, structural, mechanical, electrical and plumbing engineering and LEED services. It opened its first office, Las Vegas, in 1998, and its second, Irvine, in 2004. Phoenix followed in 2005 and then Salt Lake City in 2006.

At the start of the recession, the firm boasted 180 employees but over zthe ensuing year, reduced its workforce to about 40. The firm has also sold the two Las Vegas office buildings it owned, whose total square footage was 36,000. Now its Las Vegas office is about 12,000 square feet.

“We did everything everyone else did to stay in business,” Wright said.

Available work in Las Vegas was limited, so Wright Engineers pursued jobs elsewhere. Today, the company has projects in nearly every state, most for clients based in the West, he said. Pre-recession, about 75 to 80 percent of its work was in Nevada; now, it’s about 25 to 30 percent.

“The key for us has been to find wherever the cheese was and go there,” Wright said.

The firm also expanded the types of work it does, moving away from mostly government projects to primarily private ones, including medical, office and residential developments.

Growth has resulted from various factors including busier clients and fewer competitors. The firm actively conducts business development, forming relationships where and when possible.

It also provides structural engineering for a proprietary system developed by an Italian company that mitigates soil pollution. It shows the system to architects and developers for use on sites being considered for development. Wright said the system is “far superior” and saves developers more money than the conventional system.

Currently, Wright Engineers is challenged with internally financing its growth due to lower fees and tighter margins.

“Every time we hire a new engineer, we need a new workstation, software plus the costs associated with that engineer,” Wright said. “We won’t see a return on that investment until several months down the road.”

Finding local qualified engineers to hire also is a struggle. Due to remaining economic uncertainty, the firm is reluctant to hire an out-of-state person and have them relocate to Nevada.

Like many architecture firms, some engineering firms, including Wright Engineers, are also updating to 3D modeling systems.
“We’ve committed to being fully 3D in everything we do by the end of 2013,” Wright said.

The general consensus for the industry is a positive but cautious outlook for the near future. Many share the belief that 2013 will be productive for their firms but are still unsure about how the economies of Nevada and the U.S. will fare.

“We all are optimistic,” Simpson said. “We’re hoping we’ve turned the corner.”