You are here: Home / Features / Feature Story / The Office Environment Evolves: Changing the Rules of the Workplace 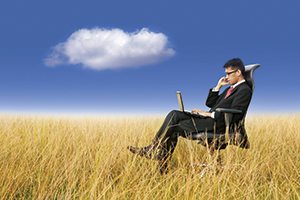 Given the organic changes taking place in business, why would anyone suppose that office environments would stay the same? In fact, they aren’t.

Rethinking the work space is the order of the day.

“Where it used to be, ‘How many more work stations can I get in this space until I max it out?’ now it’s, ‘The spaces are opening up a little bit,’” says Scott Machabee, president and owner of Machabee Office Environments in Las Vegas. “There are more collaborative spaces, more meeting spaces within an open office, versus, ‘The work stations are over here and the conferences are over on this end behind a wall.’ They are integrated within the space.”

The changes, Machabee suggests, mirror the way more people are working today. “They’re working on teams more. They’re working together more.” While there are certainly plenty of companies that have staffers doing their own focused work, “we’re seeing more and more where panel heights are coming down, collaborative spaces are being put into office space.”

A related trend, Machabee continues, is the footprint of the work stations getting smaller. “We went from everybody having these big CRT screens and a corner work surface that would accommodate that to all flat-panel monitors now, so you don’t need these big, deep work surfaces anymore.”

Machabee is convinced that the rise in collaboration has led to a concurrent increase in productivity. “People are more in touch with what they should be doing and what other people in the office are doing, and so they’re working in teams better. Have they measured the productivity? It’s a tough thing to measure.”

Adoption by firms of this sort of philosophy has been “all over the ballpark, he notes. “There are some companies that are still traditional – ‘Hey, we’re still going to have x-amount of private offices and x-amount of support staff and work stations and that’s that.’” Those opting for the newer approach are providing “compressed work space where employees have got their own area in which to focus on their tasks, and then a ‘we’ space to get together and work together with teammates who are in their office.

‘You Can Really Be Anywhere’

“First of all, what’s happening is the younger people are working off laptops,” notes Howard Perlman, President of Environmental Design Group LLC in Las Vegas. “They’re not as tied to desks as we used to be. Back when we started we had our typewriters, and later on computers, and all the files. It all basically had to be in one place, and you had to be in that place.”

Today, Perlman continues, “all that information is on your laptop and your phone, and you can really be anywhere. So a lot of the younger start-up companies have office spaces that are extremely informal. I mean, those guys could be just as productive in a coffee shop, or in a lounge as they can sitting behind a desk.”

There is, of course, still prestige in having a desk, and people still need offices, Perlman points out. People who are having sensitive conversations with other people either face to face or over the telephone need to be able to close the door and have privacy.

“But besides the privacy thing, the open-office deal seems to be the trend,” he says. “People just like that; it just feels great, and the more informal and funky it looks or feels, the better for employers to get employees. They march them to the office and say, ‘This is where you’ll be working.’ You show them this little cubicle and it’s not as sexy as taking them through something that’s kind of open and flowing and people working together in little group settings. You’ll attract better, sharper young people.”

For these and other reasons, Perlman concludes, “Employers like giving employees flexibility, and it’s the big thing today.”

Much of the direction in which a business will opt to go with its office design“ depends on the type of business,” reasons Christopher W. Larsen, AIA, the principal of JMA Architecture Studios in Las Vegas. “Your attorneys are going to require a distinctive and different environment from, say, a call center; they’ll want to be a little bit less flashy, more substantial; less out there, more conservative.”

When it comes to call centers and others, he continues, “What we’re finding from evidence-based research into office environments is that they want to do anything that will effect productivity of the occupants, and make it more attractive to the individual, give them more control.” To accomplish this, decor “tends to be a little bit more open, maybe not so much corporately forced on people. They’re letting each individual customize his space. We’re seeing more of that.”

An important element is the use of more natural light and open spaces, Larsen says. “But one of the biggest trends is allowing individuals to have control over temperature and lighting; anything that sort of makes them feel as if they’ve got control over their space. We’re seeing that creating spontaneous collaboration in the work environment through work spaces and things like that is very important. The closed-off cubicles and offices are giving way to more openness, more accessibility.”

Natural light and views into nature from occupied spaced “are very important,” Larsen emphasizes. “It’s all part of the green technology.” So is using more individual task lighting… as opposed to a bunch of fluorescents overhead.”

When it comes to rethinking cubicle spaces in order to maximize space and lower costs, Larsen says he sees more shared work spaces “such as conference rooms that can be closed for private meetings and then opened out, maybe with movable walls; going from six to 15 people to share work activities. We’re seeing cubicles, again, more open. Some occupants may want to start the day by concentrating on answering letters, communications, phone calls, which would be a more enclosed activity. But then they want to get out and collaborate and communicate. They’re opening these spaces, and people are moving back and forth between them. They want a little bit of privacy occasionally to be on the phone, that sort of thing.”

Larsen has also seen – and been impressed by — the introduction of the raised-floor system in the cubicle work space. “It’s almost a double floor,” he explains. “It allows the sub-floor space below to move electrical and mechanical much more easily and accessibly.” It also renders changing the work space easier, he adds, “because you can more easily access the conduit underneath.”

Another feature — and one that harks back to the growth of green technology — is that such a system allows air movement to condition the space from underneath “right at your space,” says Larsen, “which again may give them more of that individual control.”

“As far as the design of the interior of the offices, we’re seeing it go towards smaller units for the people. What’s happened lately is that companies have downsized, so people are getting smaller work stations,” said Paul Higgs, Operations Manager/Business Development for Office Furniture USA in Las Vegas.

In addition, Higgs continues, the other major direction in office furniture is “a big trend toward what they call benching systems and open-plan desking systems, where everyone has his own space but it’s actually very, very open. It’s no longer the cubicle walls like you used to see.”

Open-plan desking, Higgs explains, involves individual stations that are put together “but they’re not really divided by hard walls or panels. And benching systems are kind of one long system built on a common wall. Everyone has his own station, but they’re all really connected; they’re all built into one thing.”

The idea behind these approaches is that people are collaborating more,” Higgs says. Letting employees more easily congregate “makes it easier for people to work on the same projects together, and supposedly creates more of a team environment. Zappos uses that kind of an environment.”

Higgs says he has also spied a “big” trend in people “finally going paperless and wireless; more paperless than anything else. I’ve been in business for 23 years, and in that time frame they’ve always been talking about getting away from people using as many files cabinets and things as they used to. But we’re actually starting to see some of that happen.”

Machabee says he doesn’t think that green initiatives have changed the workplace a lot. “It’s changed, maybe, how it looks, though not necessarily productivitywise. “Office furniture manufacturers are doing a lot with recycled and recyclable products. “For example, Steelcase’s Think Chair is 99% recyclable.”

Going green with office interiors can prove important for companies “especially if they’re trying to attract younger workers,” says Larsen. “They are certainly more aware of the environment, and more interested in making sure that they are using green. And yes, we’re seeing the use of more green products in furniture, fabrics and the construction of work spaces and that sort of thing. They’re trying to use recycled materials as much as possible, more renewable materials; using bamboo flooring, those types of finishes.”

There is less paper, Machabee believes. “We’re still not paperless, but there seems to be less of it. More of it is on a server or in a cloud; it’s really on the computer versus on somebody’s desk.”

The big benefit to companies, he explains, is decreased real estate costs. “They don’t need as much floor space for the same number of people.”

Ahead, says Machabee, “It’s going to be interesting to see how mobile technology affects the work space. Do people have to come into an office anymore? If we get in a time machine and go five years down the road” the change may not be that great. “But if we go 10 or 15 years down the road, I don’t know. I can’t see out that far, but it certainly gives me pause for thought.”