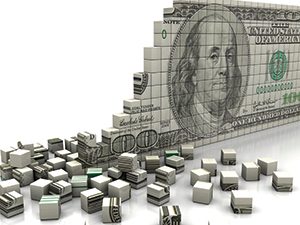 Nobody likes to talk about money. Most of us were raised to feel it’s uncouth. For polite society, that’s not such a bad guideline. But for businesses trying to maintain the bottom line, talking about money is a necessity – as is asking for it from clients and making certain it gets paid.

In the wake of the economic downturn, collections agencies are seeing fewer accounts turned over from businesses simply because so many businesses no longer exist and those that do aren’t making the same amount of sales and therefore don’t have the same amount of accounts to collect. Companies still operating may have dropped their prices in order to remain in business, so the accounts being collected are smaller. Plus when there’s a dearth of discretionary income, customers purchase fewer non-essential goods and services
There’s also the fact that many business owners now understand the need to qualify accounts before making a sale on terms (and sometimes decide on a cash transaction instead).

“I think [business owners] are also finally starting to realize that, for most companies, especially small businesses, which is primarily what we deal with, the number one asset in the company is their receivables,” said Thomas. More than staff, more than owning the building the business is located in, and maybe more than having invested in equipment, receivables are the greatest asset a company has.

Business are turning to professional help in today’s economy to collect debts, often even in cases where the debtor has to have the service but lacks the ability to pay.

“Collections are a significant issue for a variety of reasons, one being that there are so many people who are not getting full-time hours or who are still not back to work, but still need to access services,” said Dee Barbash, president, Collection Service of Nevada. “These people are falling behind and have less ability to pay.” That includes business owners in traditionally more secure businesses, like two pediatricians who filed bankruptcy in the last year. An emergency room physician may not see less business, but may very well see fewer payments.

Collections agents are also seeing clients who have the ability to pay but not the desire. Forcing payment through litigation is more common than it once was, according to Barbash.

In today’s business world, businesses owing other businesses may not pay invoices as quickly as they did before because they’re afraid to let go of their accounts payable monies. And business owners who are having a hard time paying their payables may be uncomfortable contacting the businesses they owe to say so.

A collection agency can provide a buffer between business and customer or doctor and patient, according to Barbash, which can make the situation a little less uncomfortable for everyone involved. Collection agency professionals can also train employees in the art of collecting accounts receivable.

Invoicing is a common business practice, but if a product or service is sold and the business selling it isn’t paid instantly, that business is extending credit. It’s that simple, and it doesn’t matter if terms are net 10 or net 90, it’s still extending credit.

Thomas suggests first using a credit application created specifically for the business. “A credit application states who it is you’re dealing with, if it’s an entity, how it’s structured – is it a corporation or an LLC? Is it a sole proprietorship?” Second, know how long that business has been in business, and third, know how well it’s doing.

Before extending any kind of credit, business owners need to know if the other business can actually handle the amount. If a company can’t pay $5000 up front for a product or service, it doesn’t make sense to extend them credit in the form of a net 30 invoice and expect they’ll be able to pay it within a month.

And when terms are net 30 for payment, then someone from the company that’s owed the money needs to be on the phone on day 31 to find out where the funds are. Failing to follow up on net 30 until 45, 60 or 90 days have gone by sends the message that terms are really much longer than stated – and many business owners are willing to push it as far as they can before paying, Thomas said. “It gives them extra time to pay, and it hurts your cash flow. Start looking at time value of money. Businesses that don’t are losing out on quite a bit.”

When to Take Action

It’s critical to look at slow paying accounts between 90 and 120 days and take steps. A collections agency can send a pre-collection letter to slow paying accounts, according to Barbash. The letter, which is probably charged on a per-account basis, warns the debtor that action is going to be taken, but there’s still time to work with the original lender before the account is turned over to collections.
Once it’s determined that a debtor isn’t going to pay, hiring a collections agency can both provide the distance between business and customer, and make the determination whether or not collections or legal action is appropriate.

Collection agencies operate by and large on their own money, which is to say they operate on contingency. So every decision to try and collect is weighed against the percentage chance that the debt can be collected. An 80 percent chance of collecting gets a yes; a 50 percent chance means the collection agency staff will weigh pros and cons of trying to collect.

One plus, said Thomas, is “We have no emotional attachments to what is going on, so we can look at it for yes, it can be collected, or no, you’re just going to be throwing good money after bad, we’re not going to do it because it’s not a good investment.”

Collections agencies are licensed and overseen by the Nevada Financial Institutions Division (FID) of the Department of Business & Industry and governed by statute. There are 362 agencies located in Las Vegas alone, and over 300 foreign collections agencies (from out of state) working within the state to collect.

Three types of agencies exist, according to Carla Kolebuck, deputy commissioner, FID – those that purchase debts to collect, third-party collection agencies that collect on behalf of a creditor, and the first-party agency that requests payment be made directly to the original creditor.

In order to use a collections agency to collect on a debt, the business collecting must be able to certify they do indeed have a debt to collect and that it hasn’t been paid in a timely manner. Those kinds of releases will likely be contained in the agreement between the collecting business and the collections agency, according to George Burns, commissioner, FID. Nevada statute incorporates compliance with the federal Fair Debt Collections Practices Act which stipulates what constitutes harassment in pursuit of collecting a debt.

When looking at how businesses can utilize collections agencies in order to facilitate their businesses, Burns said, “Most businesses have found it’s far more efficient and effective once they have debts reach whatever point they believe is important, be that 30, 60, 90 days, it depends on how aggressive the business wants to be in collecting their accounts receivable – that they just hand them off to a collections agency because it’s relatively time- and resource-intensive to collect on past due accounts.”

Collection Service of Nevada provides free consulting to clients to help them avoid going down the collections path in the first place. Past that, business owners need to make certain the agreements established with clients are in order, properly signed and obligating those involved to pay their debts. Also spelled out in the agreement is the six-year statute of limitations on collecting debts. Otherwise in Nevada businesses only have four years to collect.

Business owners also need to make certain they have got the correct demographic information, according to Barbash – that the John Smith they’re trying to collect from is the John Smith who owes their company money. “So there’s a lot of information gathering, and crossing of T’s and dotting of I’s that will ultimately pay off in much higher collections,” Barbash said.

While debts can only be collected according to the original agreement, the original agreement can state that if the account goes to collections there may be a charge assessed. “Not too many businesses think about putting that into their agreements when they carry accounts receivable,” said Burns. “But the larger, more sophisticated companies do.” It may be standard for medical, municipal and utilities providers.

Many collections agencies offer seminars. Collection Service of Nevada seminars teach clients anything from “how to set up an accounts receivable policy to what the laws are, both federal and state level, governing first party creditors,” said Barbash. They teach collection techniques for employees and how to work with a collection agency. Typically seminars are divided by industry, since the needs of industries vary widely.

Thomas hasn’t offered seminars in a couple years, but is thinking of starting again. “People get comfortable with what they’re doing because it’s working right now – ‘I don’t need any more training.’” Thomas disagrees. “Things are always changing. You can learn new techniques. If someone goes into training or a seminar and pulls away one thing that allows them to go back to their company and apply what they’ve learned to the benefit of that company, it was absolutely worth it.”