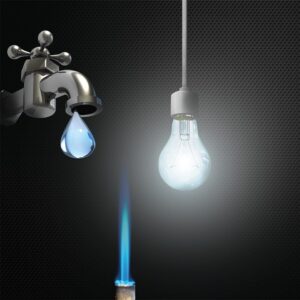 Utilities across Nevada are moving forward with projects large and small, and hoping like everyone else that a real and sustained economic comeback is just around the corner.

From one end of the state to the other, initiatives are being undertaken, plans drawn up, projects carried out and the future prepared for by utility companies and others who know that growth can’t happen without the infrastructure to support it.

Craig McDonnell, Manager of Policy Analysis for the Public Utilities Commission of Nevada (PUC) in Carson City, says there are any number of small projects going on at any time, including things like minor transmission or distribution upgrades undertaken to maintain reliability and safety on the system. “They’re small, but in some ways they’re just as immediate as the larger projects.”

There are, at present, a couple of renewable energy projects that PUC considers to be major. One is the Crescent Dunes Solar Energy Project, a 110 MW plant located near Tonopah that will eventually power up to 75,000 homes during peak electricity periods. It has reportedly employed more than 600 workers on site with a total of more than 4,300 direct, indirect and induced jobs created during the 30-month construction period. When completed in late 2013, it will have cost more than $10 million per year in salaries and operating costs.

“It’s a very novel project,” says McDonnell, “a solar thermal power plant that uses advanced molten salt power technology and stores this. It’s a pretty high-tech thing, and a pretty unique project. There may be one or two projects around the country that are similar to this.” It will help NV Energy meet its renewable portfolio standard.

NV Energy’s NVEnergize program has distributed smart meters across the state. “The main benefit is that it’s going to help our customers take ownership of their energy use,” explains Gary Smith, Director of Cunsumer Energy Solutions.

Smart meters are digital devices that collect energy-use data and, unlike traditional meters, transmit and receive data, too. Electric energy use are recorded every 15 minutes to provide an accurate view of daily energy patterns. The project is said to improve billing processes, system reliability and enhance other company and customer equipment. An important aspect of the project is two-way communication between the customer and NV Energy. Approximately 1.4 million meters will be installed across Nevada by year-end 2012. A U.S. Department of Energy grant provides nearly half of the approximate $303 million cost. It is anticipated that NV Energy’s share of the cost will come from future operational cost savings. NV Energy expects to save as much as $25 million annually to help cover the remaining portion and help hold down costs for customers.

“Today, a customer receives a bill at the end of the month,” says Smith. “He has no idea how much usage he has, no idea what the bill amount is going to be. With the new tools and technology we’re bringing forward, they can stay up to date on a daily basis, if they like, as far as what their bills is, and have useful tools to better manage and understand their energy as they go forward.”

The project, which was brought to the PUC in 2010, should realize a gross benefit of $35 million, and a net benefit of $24 million, per year, Smith says. “It’s quite a bit of savings coming back, although those savings will take time to be realized. We’re just finishing the capital spend on the project, getting the work done, if you will.”

The project is on target to complete deployment, with more than a million installed at this point. By year’s end the entire state will be blanketed, making Nevada the first in the nation to reach completion. For the year to come, Nevada Energy will focus on educating Nevadans.

“The major initiative for the past couple of years has been getting the infrastructure complete, whether it’s the back-office systems or the metering that people see on their homes and businesses,” Smith reflects. “In 2013 it’s time to turn a corner and really help our customers with education about how to use the tools for their home or business.”

NV Energy’s One Nevada Line (ON Line) is a 500 kV transmission line with an in-service date of 2013 that will provide greater system reliability by linking the northern and southern systems for the first time. The project will significantly increase the ability to obtain energy independence for Nevada by enabling NV Energy to share renewable resources.

NV Energy has also launched the Reno California/Arlington Line Conversion project to improve the efficiency and reliability of its electric lines and facilities in some of the oldest neighborhoods in Reno. Into the fall months, workers will be performing maintenance, replacing wires and insulators and/or replacing power poles as needed. In late August of this year, NV Energy employees and authorized contractors began working in the project area, assessing the area and planning the work. Last month, workers began pruning trees that are growing into the utility right-of-way or have grown into the power lines. In addition, they began testing power poles in various neighborhoods to ensure support and stability for the conversion of electric facilities when they are installed. When the preparation work is complete, the utility will convert existing wires on the poles, and may need to replace some poles.

The only major project that the Southern Nevada Water Authority (SNWA) has going on now is the Lake Mead Intake No. 3 Program. Its goal is to protect the existing water system capacity against potential inoperability of Intakes Nos. 1 and 2, and allow SNWA to draw better quality water from the deeper elevation and location in Lake Mead. It is scheduled to be completed in a couple of years.

An odd note: The Arizona-based Center for Biological Diversity, an Arizona-based environmental group, has filed a lawsuit against the U.S. Fish and Wildlife Service to protect several species of snails smaller than peas that apparently thrive in the path of SNWA’s proposed groundwater project in Eastern Nevada.

“I think our industry is facing ever-increasing regulation stemming from some of the high-profile incidents that have occurred in the country,” notes Jeff Shaw, President and CEO of Southwest Gas. The prime example he cites is “the San Bruno incident that occurred a few years ago, where there was an explosion on a transmission line from PG&E, and subsequent fire (and) some fatalities. There were some previous incidents that occurred in Allentown, Pennsylvania, so there has been a heightened focus on pipeline safety throughout the country.”

Southwest Gas, Shaw adds, has been “very, very fortunate to be involved with the American Gas Association in many areas of pipeline safety, including the pipe itself, installation practices, training programs and everything dealing with pipeline safety. We have had, I believe, a leading role in the industry.”

Southwest Gas has always had a rigorous pipe assessment processes in place, in which representatives inspect various types of pipe to evaluate how they are performing. “In the industry you have leaks,’ he concedes, “but not every leak is a problem. There are some that are in remote areas that aren’t as concerning as those that might be in more crowded areas.” Municipalities “are always in the process of replacing so that you can avoid any type of safety incident.”

Southwest Gas asked for an increase in annual revenue of $1.2 million in Southern Nevada, which would translate into a rise of 0.24%, on the average monthly winter bill. In May, Southwest Gas began seeking a 6.2% rate hike to cover rising operating costs such as wages, benefits and inflation. The utility has also asked for a monthly surcharge to pay for pipeline replacement.

Shaw has identified in the industry what he calls “a real focus – and from the federal government as well, through new legislation – on making sure all vintage of pipe is examined, similar to the way we’ve been doing it.” In some areas of the country, he points out — for instance, the East — there are many companies that have used cast-iron pipe “which is known to leak and have some problems. A lot of companies are undergoing aggressive pipe-replacement projects and having regulatory support to do that.”

For 2013, Shaw and his colleagues are hoping to see growth return in their service area, which in addition to Las Vegas includes the Tucson and Phoenix markets. “So far, we haven’t seen anything dramatic, but there are stirrings of some activity.” Developers have told him that they are becoming involved in more projects “albeit not to the level we once knew here, but certainly directionally positive. So we hope that as we turn the corner into 2013 we see some momentum return in the housing industry — although I will tell you that if it starts returning to levels we saw in ’05, ’06 and ’07 that would worry me. But if you start to see something a little more routine, maybe in the 2% to 3% growth rate, I think that’s sustainable. That would produce jobs (and) get the construction industry going again, which would be great for the community.”

It would, indeed, be great for the community — and for the utilities that service it.