You are here: Home / Features / Feature Story / See You Next Year in Nevada! Corporate Meetings and Conventions 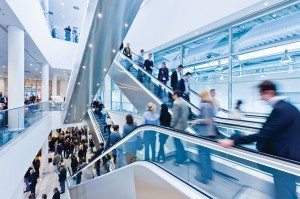 Northern Nevada’s a much smaller market, but for a metro area of about 400,000 people, Reno-Sparks still offers a range of convention and meeting spaces, from the 500,000-square-foot Convention Center to the Reno Ballroom and several different venues in between.

Corporate meetings, which can encompass business and sales meetings and corporate events to celebrate a product launch or the highest producing team members, are part and parcel of the corporate meetings, association and professional conferences and conventions business that can make up anywhere from 55 to 65 percent of the income for hotels in metro areas across the country. For a state like Nevada with an economy that’s heavily reliant on the hospitality and tourism industries and still adjusting to losing its lock as a gaming destination, the conventions and corporate meetings business can be major to the local economies.

For one thing, corporate meetings and association events like conventions fill hotel rooms on week nights. Filling rooms on weekends isn’t a challenge – filling them on Tuesday, Wednesday and Thursday nights is. Plus it’s easier to fill the rooms in blocks than individually. If a convention comes in and books 500 out of 800 rooms, the hotel is well on its way to filling up for that part of the week.

“The rule of thumb for most destinations is about half your business comes from meetings and conventions,” said Chris Baum, president and CEO, Reno-Sparks Convention and Visitors Authority (RSCVA). “So, for a destination like ours the gaming industry is very different than it was ten years ago. For a lot of businesses that have spread out further as the pie has gotten bigger for gaming customers, that gap is being filled by these conventions. It’s extremely important to not only our current but future success as a destination.”

For those visitors and corporate event planners who have discovered Northern Nevada, the region stands out as a destination. So getting the word out that the Reno-Sparks-Tahoe area exists independent from Southern Nevada is important. It’s a very different product in the North and the challenge isn’t the product, but the perception of the product.

Because the product is there. “We have incredible facilities for a resort town our size, and we really have incredible value,” said Baum. In Northern Nevada, Reno offers the Reno-Sparks Convention Center boasting 500,000-square-feet – big enough for just about everything except the Safari Club International, which will hold it’s annual convention in Reno in 2013 and 2015 but after that is planning to move to bigger pastures.

But most metro areas across the country feature some kind of convention center for professional meetings and conventions. What sets Nevada apart is the resort destination aspect that means we’ve got different sorts of meeting and convention space. For almost any business looking to hold a corporate meeting or some other annual event in Reno, Nevada has space.

In Northern Nevada, there are nine hotels of 800 to 2,000 rooms. But more than being able to house the event attendees, the hotels also offer convention and meeting spaces. Grand Sierra Resort has some 200,000-square-feet of convention space on its property.
“People who might use a convention center in other destinations have the options of using individual properties and onsite hotel space for their conventions when they come to Reno,” said Baum, pointing out one of the reasons the Convention Center may not see as much action as might be expected.

Despite the boon corporate meetings and association events can be to the state’s financial situation, until recently Northern Nevada has been something of a bit player when it comes to national events. It’s been easy to be overlooked when so much of the rest of the country knows Nevada as Las Vegas and some open space.

In Northern Nevada, word of mouth helps reach meeting planners. As the state works to create awareness in other parts of the country as being a great destination for meetings, groups that have already discovered Nevada spread the word. The National Guard Association of the United States General Conference was held in Reno in September. “They filled the Convention Center and used local hotels and had a fantastic time,” said Baum. “They said we executed beautifully. We just want that times 50 to keep those kinds of groups coming here and word of mouth from past experiences from these groups gets new businesses coming here as we go forward. The more conventions you do, the more people hear about it and the more people want to bring their meeting or convention to your destination.”

In Southern Nevada, where meetings and conventions business has already increased 16.2 percent year to date, it’s probably because of a little bit of everything – location, perception of the destination, accessibility – and it’s Las Vegas. With the economy slowly recovering, hard hit industries like automotive, financial and insurance are starting to hold national annual meetings again, where during the downturn several opted for smaller regional events.

When choosing a hotel for a corporate meeting or association event, planners have all kinds of different criteria and needs. “It’s like asking what makes a good pair of shoes?” Baum said. It’s all individual choices.

Some planners are looking for the lowest prices, but if the purpose of the corporate meeting is to reward top performers within the business, cheap isn’t the way to go. In that case, they’re probably looking for somewhere everyone is made to feel special in order to motivate top performers to perform even better in the next year. However, corporate meetings held for the purpose of functional discussions may take a bare bones approach because the budget doesn’t really have the room for the meeting to begin with.

And there’s everything in between. Trade and professional organizations want meetings to be held somewhere with good value where members will be encouraged to attend, but because they’re not required to attend, unlike employees required to attend corporate meetings, value and being affordable are both significantly more important.

When setting up corporate meetings and events, virtually everything is negotiable, said Baum. “It depends on a complex combination of the amount of revenue the group is going to spend, and what’s important to them. Whether you give away function space for free, a deeper discount on food and beverage, or a better discount on rooms, different people ask for different things and different people look to different criteria as to what is a successful negotiation for them.”

“Most executives are looking for value and a unique experience, coupled with stellar product and a facility that will accommodate their requirements for the business environment,” said Veronica Kistner, vice president, sales, Green Valley Ranch and Red Rock Casino, Resort & Spa. Red Rock offers up to 100,000-square-feet of meeting space for groups from 15 to 1,500, and the planners for most groups are looking for a destination that’s easy for their attendees to navigate and that has great service and value. At the end of the day there’s not much difference between a small 10-person corporate board meeting or a 500-member association convention – they want value for dollars spent and arrangements that fit their event, and money may not be the most important consideration.

“We can help them analyze the properties we have and understand the relationships we have with properties and help with special arrangements they may have and figure out dates and time frames throughout the year that may be more beneficial to [the organization],” said Amy Riley, senior director, convention sales, RSCVA. “Different corporations have different needs, fiscal years and corporate years, and we can help guide them to dates that may be more appealing or help if they’re looking for a little niche property rather than a resort represented by a national sales team.”

There are many draws to lure organizations and businesses to Nevada for their events. Both ends of the state boast 300 sunny days a year and outdoor activities. The state is easily accessible, Northern Nevada by trains, planes or automobiles, and Las Vegas’s airport is conveniently located to the Strip. There’s the enormous number of guest rooms in the metro areas, and convention and meeting space that’s anything from intimate boutique spaces to mega-resorts.

The M Resort encompasses the intimate and the large in the same off-Strip property. Offering 80,000-square-feet of space and more convention space than guest rooms, the unique 95-acre resort encompasses 110,000-square-feet of pool area that can be transformed into a stage, appealing to the entertainment aspect of corporate meetings, according to Drew Varga, vice president, sales.

The M Resort is located off-Strip for meeting planners who’d like a self-contained venue that’s not located right in the heart of Las Vegas action, but apparently the Vegas nightlife doesn’t distract meeting goers and conventioneers – on average, when groups rotate their events to Las Vegas as their destination, they see 15 percent better attendance. Trade shows in Vegas find more people spending more time on the trade show floor – 11.5 hours in Vegas versus 5.9 to 9.5 hours in other cities, according to RSCVA research.

For destinations, reaping the benefits of corporate and association visitors is all about custom tailoring the needs of the organization to the event and destination. “You make sure you deliver a package you believe is the best value for the organization for their priorities and for that meeting,” said Baum. “You run the gamut of what people are willing to pay and what their expectations are and what they hope to accomplish. If you don’t know that it’s hard to put together the best deal to make sure you get the business.”

Corporate meetings and association events can be vital to an area’s economy. In Southern Nevada it’s a $6.3 billion dollar non-gaming economic impact on an annual basis and supports 58,000 jobs. The ripple effect means that overall meetings and conventions support some 380,000 jobs, touching everything from hotels to retail to airlines and any kind of transportation coming into Nevada. Just as corporate meetings means hotel rooms will be filled midweek and some 55 to 65 percent of hotel business is convention business, there’s also the 13 percent occupancy tax, a percentage of which goes to the city’s tax base.

Convention authority staff on both ends of the state are reaching out to trade shows, corporate meetings and association events. RSCVA staff are attending exhibition trade shows for travel and event planners. They’re bringing planners to Northern Nevada to get a feel for the destination, and they’re advertising in trade publications throughout the industry.

LVCVA’s 100 day challenge started in September and ends mid-December; during the challenge, the organization will bring in visitors and host client events and invite partners to attend everything from baseball games to structured receptions, all to promote the region as a great place to host a corporate meeting.

RSCVA formed a strategic partnership with the American Society of Association Executives, the largest group of executives who plan meetings and conventions, and went from being a minor player to the highest tier of partnership. An aggressive campaign of advertising in industry publications and trade magazines for the convention industry is underway.

“We have lots of big hotels here so for meeting planners it comes down to personal choice,” said Baum. “We have hotels in town that have loyal followings and hotels that offer enough variation on a theme that if somebody says they’re looking for a specific property like this but not this, we probably have a couple options that meet their criteria.”

The Southern end of the state, known for its nightlife and glamor, offers the draw of increased event attendance, great value and great accessability. “It’s sexy,” said Kistner.

“And it has great entertainment value.”