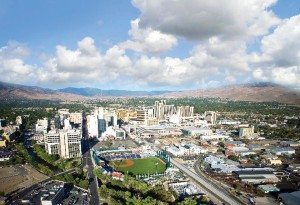 Northern Nevada has earned its developing economic comeback the old-fashioned way: building on its strengths, looking to the future and taking common sense steps to coax and reward entrepreneurialism and innovation. It’s paying off.

“There’s a lot going on,” says Rob Hooper, Executive Director of Northern Nevada Development Authority (NNDA), the Economic Development Authority for the Sierra Region of Nevada (Carson City, Churchill County, Douglas County and Lyon County, and the southern half of Storey County) in Carson City. “I think that the biggest thing happening in business, from an economic development perspective, is that Northern Nevada has become highly functional in many different areas of economic development.”

Indeed, business development – “which is the thing that everybody gets real excited about,” Hooper says is “working extremely well. The partnership between the Economic Development Authority of Western Nevada (EDAWN) and NNDA is fully engaged. It really warms my heart to see these prospects coming into the system and being passed back and forth, based on where the client is best served.”

In the last year, Hooper recounts, 33 new companies have moved into his region, creating 2,500 new jobs. “When you run your economic impact analysis on that, it’s attracted 3,600 new residents, sold 1,400 new homes, added 700 students to our educational system, and created $180 million in economic impact.” It has also increased the revenues in the insurance and finance areas by $7.5 million and led to the sale of an estimated $4.7 million in new vehicles.

The businesses are diverse, everything from internet fulfillment to manufacturing, metal shops, wood shops, and laboratories. “They’re not real big when they get here,” says Hooper, “and then they grow.” One company, for instance, that makes small power transformers for circuit boards that moved into Douglas County two years ago with eight to 10 employees now has about 70. “That’s how we’re seeing growth happen right now. I like to say the Sierra region is where great ideas become a reality, and where business is successful.”

“I would say our activity has continued to get better,” notes Mike Kazmierski, President & CEO of EDAWN. “I wouldn’t go quite as far as to say things are great, because we still have 25,000 people unemployed. But from a pipeline perspective, and an activity level perspective, we are seeing things popping.”

Some of the popping came in July, when IT company NJVC announced the opening of a new 20,000-square-foot data center in Reno. The facility will permit the company to provide commercial and government customers across the nation with secure, cost-effective and cloud-based data center solutions. NJVC executives chose Reno for its data center, according to a release, primarily because it lies on the western edge of the safe zone, according to the U.S. Department of Homeland Security, making it one of the most stable data center environments in the continental United States. Other factors, such as the region’s connection to the national fiber overlay, ensure very low latencies for data throughput. The low costs of building space, power cooling and low overhead also were contributing factors.

Also popping: another Urban Outfitters grand opening was announced in early September, and according to Kazmierski “we’re cueing up for three or four additional announcements for the next weeks, for 50 to 200 jobs each. On top of that, we have three joint announcements that we’re going to do with NNDA.” Thus, the early autumn could see as many as six additional announcements, which is good. “We usually have somewhere between 15 and 20 company-assisted announcements in a year. We had about 16 last year, and I think we’ll be well ahead of that this year.”

The number of new jobs announced is also the highest in the last decade, Kazmierski adds. “Our number for this past year, nearly 1,600, almost doubled our five-year average.”

The Reno Tahoe area “is very popular with businesses looking to relocate or expand operations,” says Sharon Zadra, Council Member, Ward 2, City of Reno. “We offer a wonderful quality of life, world-class outdoor recreation, excellent educational institutions including a university and an international airport. Our community colleges and technical schools are also quick to respond to the training and educational needs of companies needing specific training for future employees. Companies consider these benefits as well as low property taxes and no corporate, inventory, personal income or franchise tax when considering Reno as a location for their business.”

Among the most recent arrivals have been:

One Contact, a new business process outsourcing company that is estimated to create as many as 200 jobs within the next five years, and 150 of them within six months

CustomInk, set to open a 25,000-square-foot facility for its Design On-Line customer t-shirt business. Anywhere from 75 to 100 new jobs are expected to be created.

Beyond that, Apple plans to ready its much ballyhooed new technology park near Reno to support its on-line stores and iCloud service, a project reported to cost $1 billion over the next decade. The facility is said to be just one piece of development plans that will also see the company erect a purchasing center in the city’s downtown area.

“We hope to build Apple’s next data center in Reno to support Apple’s iTunes Store, App Store and incredibly popular iCloud services,” Apple said in a prepared statement in June. “If approved, this project would expand our presence in Nevada and create hundreds of construction jobs over the next year, plus permanent jobs at the data center which will add to our existing total of nearly 400 employees in the state.”

“Specific build/open information is not available at this time,” Zadra says.

According to Zadra, community leaders and stakeholders have collaborated to create a three-year economic development strategy. “The plan includes reaching out to target industries including geothermal technologies, distribution/logistics, manufacturing and data/call centers.” It also focuses on working with area businesses to retain and expand local jobs.

What explains the growth?

“I think it’s a lot of things,” says Kazmierski. “What we have is an attractive product here. The state, as a whole, has taken economic development seriously, which has certainly helped. We have other states that are not as friendly to business as we are, and we are aggressively marketing to those states in a way that will allow us to be compared to what’s happening to them wherever they are.”

Obviously, California ranks first on that list. Kazmierski is finding a lot of interest from business people there, “and that interest turns into prospects. If we can get those prospects to visit and make a decision, the vast majority of the time – probably more than 70% of the time – they’re going to decide to relocate or expand in Northern Nevada.” He calls this “a pretty exciting outlook when you consider we still have a ridiculous number of unemployed who need jobs now, and an economy that’s still, at the national level, kind of stagnant. Our local economy is moving in the right direction.”

What all of this means is good cause for optimism as we head towards 2013, he explains. “When we see our prospect numbers pick up – let’s say we get 10 new prospects in a month, which is a good number – we will normally not see results from those initial inquiries for six to 10 months. So as we see this activity pick up now we’re really talking about likely announcements in 2013.”

The sectors in which EDAWN is seeing the most activity are logistics and distribution, and for good reason. As Kazmierski points out, “Northern Nevada is in the heart of the West. We can get anywhere in the West in basically one day of car travel. That locational advantage is continuing to get us interest and activity.”

There also appears to be much more interest and activity in manufacturing, especially smaller manufacturers wrestling with regulations and harassment they may be getting in other places.

“When you’re smaller you don’t have a huge staff, and a bank of lawyers who can help you fight every goofy new regulation,” says Kazmierski, “so you just get tired of it at some point. What they’re finding is that this is a very business-friendly area. The entire state is pro business, and a great place for manufacturing.”

Workforce education will continue to be a major component of Northern Nevada’s economic progress. “Four years ago we had very little going on,” Hooper recalls. “Now we have all kinds of cool things going on.”

Cool thing number one: Mike Raponi, the director of the Career and Technical Education (CTE) program for the state’s Department of Education, has upgraded programming “beyond belief,” Hooper says. “They have the 21 skill standards that they are implementing into their programs along with the general education for K to 12. They’re looking to career readiness and college readiness as the same thing. They have brought in the West Virginia program with all of its bells and whistles to the state. They’re really doing some great stuff.”

In White Pine, medical coding has been added to the CTE offerings. Health science has been added in Pahrump, and Western Nevada College has added equipment used in training manufacturing employees.

“In short, we have 11 different workforce education programs that are all cooperating with each other and doing great stuff, “ says Hooper, “including the ones that DETR (The Department of Employment, Training & Rehabilitation) is doing with their Right Skills Now program.” The program lets individuals looking for jobs in manufacturing earn college credits and professional certifications in 16 weeks.

Major projects currently ramping up include the Walker River Beef project, a 300,000-square-foot meat processing plant – cattle, pigs, sheep, goats — located close to Yerington that could eventually employ 700. The $100-million facility is projected to kick off processing operations by the middle of next year, and reach full capacity by 2015.

A new incubator in downtown Carson City from the Hop & Mae Adams Foundation is generating some good buzz, as well. Four out-of-state small technology firms are already preparing to move in. It is hoped that the center will draw innovative and technology-based industries and younger urban workers. The foundation will work in partnership with Carson City Careers and NNDA to identify and promote new business and business-expansion opportunities in the city’s downtown area.

Mining is similarly ramping up, Hooper says. In July, Nevada Copper Corp. announced it has submitted mine development and operating permit applications to the State of Nevada for its 100% owned Pumpkin Hollow Property located near Yerington. That project could eventually mean 800 new jobs. In addition, Comstock Mining Inc. in Storey County is reopening the historic Comstock Lode near Virginia City and Gold Hill.

“That is going to hire a lot of people,” says Hooper, and generate approximately 20,000 gold equivalent ounces per annum. “We’ll see the mining economy spreading into our region in a bigger way.” Once it hits its stride, the operation could achieve yearly run rates in the neighborhood of a million tons of processed ore.

Northern Nevada itself certainly appears to be hitting its own stride, as well.