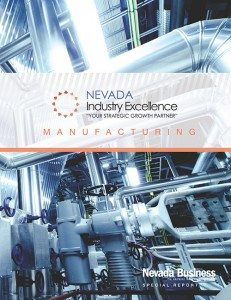 With manufacturing suffering nationally along with the rest of American business, it is largely thriving here in Nevada.

The engine has been a combination of factors – from legislative miscues in California and a strong Nevada workforce and overall business climate to the relatively low price of land and facilities, an available and affordable workforce, savvy strategy and elbow grease from Nevada’s economic development officials, and even some serendipitous benefits of the crummy economy.

Going forward, of course, much will hinge on which way the upcoming election goes. Texas Congressman Ron Paul echoed those sentiments on the campaign trail, noting that “A lot of (manufacturing firms) went overseas because of all the taxes and the regulations, (and) also (because of) wages.” Indeed, President Obama himself created a new cabinet-level Office of Manufacturing Policy to be co-chaired by the Commerce Department secretary and the director of the White House National Economic Council. As he said at its announcement several months ago, “At this make or break time for the middle class and our economy, we need a strong manufacturing sector that will put Americans back to work making products stamped with three proud words: Made in America.”

In August, National Association of Manufacturers President and CEO Jay Timmons said that his members “are anxious about where the economy is headed, and recent weaknesses in other surveys offer no encouragement.” Manufacturers, he said in a statement, have been “quite clear that their most significant concern is the uncertainty swirling around Washington. Saddling businesses with tax increases and policies that cause uncertainty only hinders their ability to create jobs.”

Nevada seems to have dodged at least some of the bullets that most of the other states haven’t. Indeed, manufacturing remains one of the bedrocks of this state’s economy.

According to the Nevada Department of Employment, Training and Rehabilitation, 153 hotel, motel and casino hotel firms in Carson City and Churchill, Douglas, Lyons produced average employment of 20,384 in 2010 ($27,460 in wages per employee). The manufacturing sector’s 812 firms, on the other hand, produced average employment of 17,465 ($51,751 per employee).

Numbers from MIG, Inc., the sole-source provider of the IMPLAN (IMpact analysis for PLANning) economic impact modeling system, show that GDP for the same geographic area and period was $1.02 billion for hotels/motels/casino hotels (GDP per employee was $50,106), and $2.06 billion ($118,077 per employee) for manufacturing. IMPLAN is used to create complete, extremely detailed social accounting matrices and multiplier models of local economies.

So, how’s manufacturing in Nevada doing?

“We’re doing pretty well, actually,” says Mike Kazmierski, President and CEO of EDAWN, the Economic Development Authority of Western Nevada, a private/public partnership committed to recruiting and expanding quality companies that have a positive economic impact on the quality of life in Greater Reno-Sparks-Tahoe. “And I would tell you that we have been more aggressive in our marketing aimed at attracting manufacturing from California, which doesn’t really appreciate, in many ways, the manufacturing sector, which is why there was an opportunity for us.”

Manufacturing firms have either come or are thinking about coming from California to Nevada, Kazmierski explains, for a wide variety of reasons. One is that manufacturing “is oftentimes dirty, noisy, trafficky, messes up the air, uses water; it has an environmental impact component to it.” While all of that has been true about the manufacturing sector for a long time, he continues, “It’s something that California is less tolerant of now than they have been in the past, and so the regulations have become more onerous.” Taxes and permitting have also become more expensive, as has the cost of employment, “whether it’s unionization or just cost of employees. It’s much higher.”

Beyond that, Kazmierski explains, as Nevada’s utility rates come down “it continues to make us more attractive from that perspective, too. So overall, business climate and cost of doing business are starting to really impact the manufacturing, and our advantages here are becoming much more pronounced.” That should certainly continue into 2013, he adds. “We currently have about 40 different manufacturing companies that we are working with that are considering Northern Nevada as a place to relocate.”

Manufacturing “brings good jobs to the state,” confirms Steve Hill, Director of the Governor’s Office of Economic Development. “I think we’re seeing a resurgence of manufacturing in the country and in Nevada.”

One of the focuses of economic development – “frankly, the focus on economic development,” Hill points out – is businesses and jobs that export out of the state. “Predominantly, manufacturing in Nevada adds to the export economy, which brings dollars into the state through the goods that we provide. The export economy – and when I say export that, it could be to Arizona or to the Far East – is really what drives an economy in a region or state. It’s why there is the focus on manufacturing.”

Part of the reason the state’s manufacturing sector has remained as strong as it is has been the business environment across the state, Hill suggests, “and part is that we have a work force that is able to do that work. And then as we have gone through the tough economic times that we’ve gone through, the facility costs and housing costs and all of that have gone down.” And so while no one looks forward to economic turbulence, “at this point it has made us attractive to companies. As they’re looking for facilities, the costs of those facilities in Nevada right now are very competitive.”

Hill also sees a benefit in the state’s manufacturing covering a variety of industries. “Electronics are a part of that. We have a pretty strong cluster of manufacturing in aerospace and defense, and because that is growing, it has been helpful. If you drive from Reno down through Crescent Valley and into Minden there are some pretty high-tech aerospace and defense manufacturers there. We also have some of that in Southern Nevada, as well. And then obviously the gaming industry has a big manufacturing component to it.”

“Manufacturing is definitely an economic driver for us, as well,” reports Terri Sheridan, Economic Development Administrator for the City of North Las Vegas. “Depending upon the types of businesses, manufacturing jobs can typically be a provider of higher wages. We actually enjoy several high-tech companies here in North Las Vegas, like Bigelow Aerospace and Nikkiso Cryo Inc., just to name two. Then we have other manufacturing as well. We cover the gamut: food manufacturing, Basic Food Flavors Inc., Tortillas’ inc. and even Blue Oasis Shrimp Farm. We’re also growing shrimp in the desert here in North Las Vegas. Even Windset Farms, hydroponic growers of English cucumbers, is here.”

What’s bringing companies to North Las Vegas is, as always, a combination of factors: availability of land and space and access to infrastructure, which of course is key to logistics. “Meadow Gold Dairy opened their facility in early 2004,” says Sheridan. “They’re located out near the Las Vegas Speedway with access right to the (highway).”

Building up the manufacturing sector in North Las Vegas is “definitely” a priority, Sheridan insists. “It’s a way to further diversify the economy. In the long run it will help the state by having those new businesses added to our already existing customer base. We’ve got a good assemblage of manufacturing businesses, and we’re working every day to help those that are here and try and attract new ones. Attracting manufacturing companies will enhance our city’s economic stability and the state’s, as well.”

Manufacturing companies “import revenue into a community through their out-of-state or international sales,” notes Jeff Leake, Economic Development Manager for the City of Henderson. “This importation of new dollars into a region makes it one of the best employers to have versus retail firms that recycle dollars through the economy.” Henderson is home to nearly 50 firms in this sector, helping to validate the area as a solid place for manufacturers to do business, he adds. The city is also well positioned to accommodate the attraction of new manufacturers or the growth of existing firms in our community.

From a logistics perspective, Leake points out, companies can cost-effectively reach a market of over 25 million within a 250-mile reach. “Over 60 million live in the states surrounding Nevada, within a one- to two-day shipping time. Low-cost shipping opportunities are created here as the region is a net importer of goods.” In addition, Nevada’s tax structure along with the incentive and workforce development programs that are available to qualified companies “provide additional opportunities for drawing new businesses and helping existing manufacturing firms in their local growth.”

“I’ve been in manufacturing most all my life,” says Terry Culp, Statewide Business Manager and Southern Nevada Operations Manager for Nevada Industry Excellence (NIE). It remains a key component of a healthy economy, he notes. “The industry pays a higher scale, and the benefits are stronger. Each manufacturing job generates four other jobs in the community.” Indeed, he adds, the largest slot machine manufacturer in the world is here, International Gaming Technology.

“We’ve basically got the best business climate in the U.S.,” boasts Culp. “We’re kind of the capital of the new mega-West: we have no corporate income tax, no personal income, no inventory tax. We’re a business-friendly state from both the local and state government perspectives. We have excellent state incentives. We do actually have a pretty good workforce, not only computer literate but expanding. They are a cost-effective workforce, as well.” Nevada also offers a reliable and expanding energy base, with exceptional telecommunications and technology infrastructure.

Another often overlooked fact is that Foreign Trade Zone #89 now encompasses the entire Clark County area. “What that means to a company,” Culp explains, “is that they can go to the NDA, which has the trade zone under its name, and file paperwork to be a foreign trade zone within their own facility. Then they’re able to bring in goods from other countries to assemble into their products and ship them out of the country without having to pay duty on the imported portion of their product.”

Lean manufacturing technology, says Culp, has been one of the cornerstones in the suite of services throughout the state for the last 12 years. “We have partnered with Workforce Connections in utilizing lean and green initiatives, and implementing them with many companies.”

Growth at “a positive pace” should continue right into 2013 for the manufacturing industry, Hill believes. “I don’t know that it’s going to, over the next six months, explode. But I do know there are a number of companies, particularly in California, looking to expand into Nevada. Not necessarily uproot their companies and move, of course, although some might. But certainly as they expand they would like to do so in an environment that they feel is welcoming and hospitable, and allows them to, within certain boundaries, operate. I think they’re finding it harder and harder to do that there. I think it provides a lot of opportunity.”

Hill’s office is working with some of the development authorities, and recently contracted with a consultant in California “to help us get that word out to those in manufacturing and technology. We think there are some positive signs there, and that it will continue to grow.” He points out that many of those who have lost jobs here have been in the construction industry – and that “moving from construction into manufacturing is a reasonable step to take, so we have a pretty qualified workforce available. I think that’s attractive, as well.”

And attractiveness – for whatever combination of reasons — will be the key to Nevada manufacturing’s future growth.

Click here to view the Special Report in its entirety