You are here: Home / Uncategorized / How We Stack Up

There’s no doubt that Nevada is unique among the 50 states – it’s the driest, has the most mountain ranges, produces the most gold, and has the highest percentage of land managed by the federal government.  But how does Nevada stack up as a place to live, to raise a family or retire, to work, or to start up a business?  For this month’s issue, we compiled statistics from a variety of state and national sources to paint a more complete picture of the state Nevadans call home.

Whether they came to the Entertainment Capital of the World, The Biggest Little City in the World, or somewhere out in Cowboy Country, nearly 50 million tourists visited the Silver State in 2009 – and they brought their money with them.  These figures show the huge impact that travel, tourism, and gaming have on Nevada’s economy.  The leisure and hospitality sector provides 27.1 percent of jobs in Nevada, and casinos brought in nearly a billion dollars in tax contributions in 2008.  Economic diversification has been a state goal for many years, but until that occurs, tourism is still the driving force behind Nevada’s Economy.

Nevada’s schools have been receiving poor grades for many years, and the numbers shown here bear this out.  Compared to the national average, Nevada students score lower on standardized tests and are more likely to drop out of high school; their parents are less likely to have college degrees.  Many factors feed into this, including the transient nature of the population, the high percentage of service-sector jobs, and the diverse makeup of Nevada’s major cities.  Education will continue to be a challenge for Nevada for the foreseeable future. 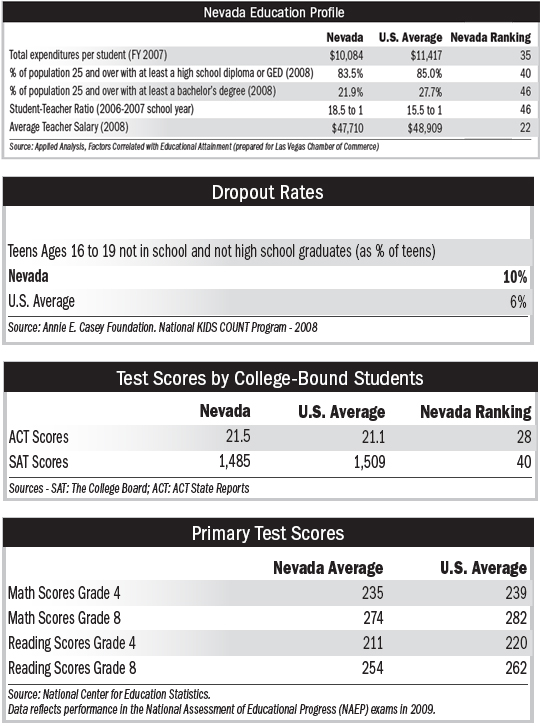 Nevada ranks near the bottom of all states in the tax burden on individuals, with no personal income tax, no inheritance or gift tax, no estate tax and competitive sales tax rates.  It also has a very favorable tax climate for businesses, with no corporate income tax, no unitary tax, no admissions tax, and a relatively low employer payroll tax.  Taxes per capita are relatively low, due to the taxes paid by the out-of-state visitors who make up such a large percentage of our day-to-day population.

While many Nevada statistics show extremes of either good or bad news, the cost of living in the Silver State hovers right around the average for the rest of the country.  The composite indices for our two largest metropolitan areas are only a couple of percentage points above the national average, and since these figures don’t take taxes into account, the actual cost of living may be slightly less due to Nevada’s lower tax burden. 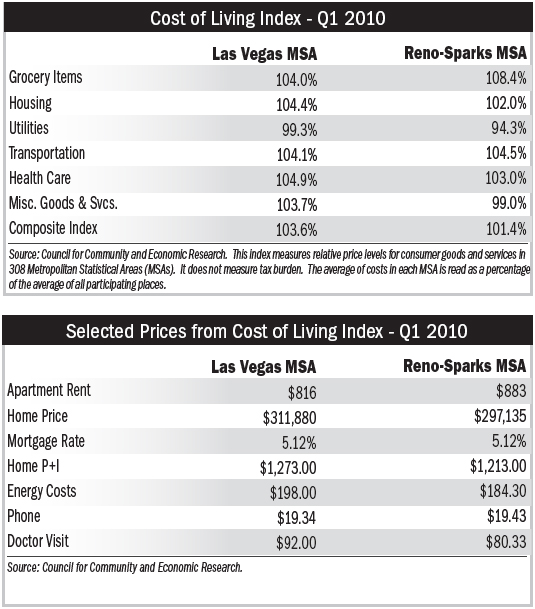 The Boyd Company, based in Princeton, New Jersey, provides independent site selection consulting services to clients in a number of manufacturing and service industries.  They have conducted several studies showing that Nevada’s cities and towns provide lower-cost alternatives to similarly-sized locations in other states.  Factoring in payroll costs, lease rates, taxes, utilities and many other factors, Nevada compares favorably in the overall cost of doing business. 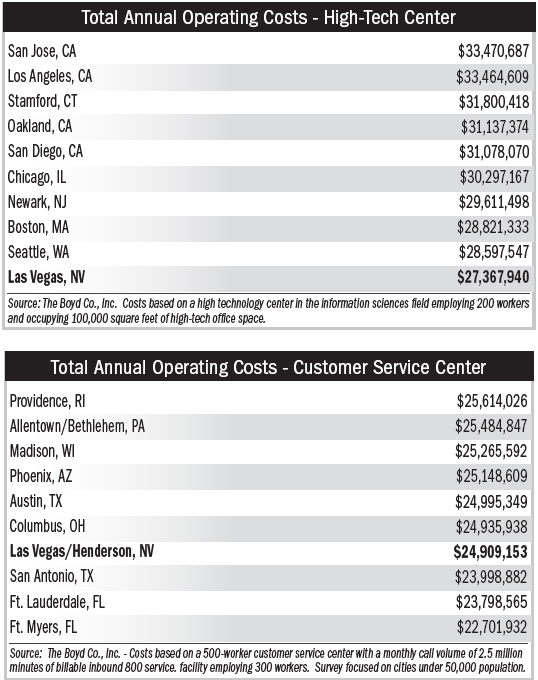 Nevada’s health care system is not ranked highly in national statistics, although many in the industry are hard at work to change this.  Strides have been made recently to add new avenues of care and to improve the quality of care Nevadans receive.  Additionally, many of the local schools have partnered with the healthcare community to assist in the education of Nevada’s next generation of healthcare providers.

Although Nevada ranks near the top in many measures of criminal activity, it is important to keep in mind that these numbers reflect reported crimes per 100,000 members of the permanent population.  On any given day, our official population of 2.7 million may be swelled by hundreds of thousands of temporary visitors, and odds are that some of them will be wrongdoers. 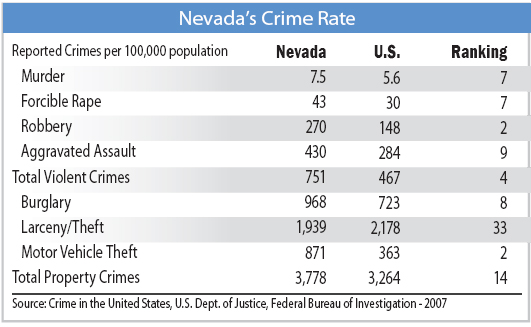 For several years, local developers as well as investors from other states fed a homebuilding frenzy in Nevada that reached its peak in 2006.  The cyclical nature of real estate would have eventually led to a market downturn, but the national economic recession made the “bust” part of the boom-and-bust cycle more intense than anyone could have imagined at its peak.  With a higher percentage of foreclosures than any other state and home prices well below recent levels, the housing market has only recently showed signs of ending its freefall. 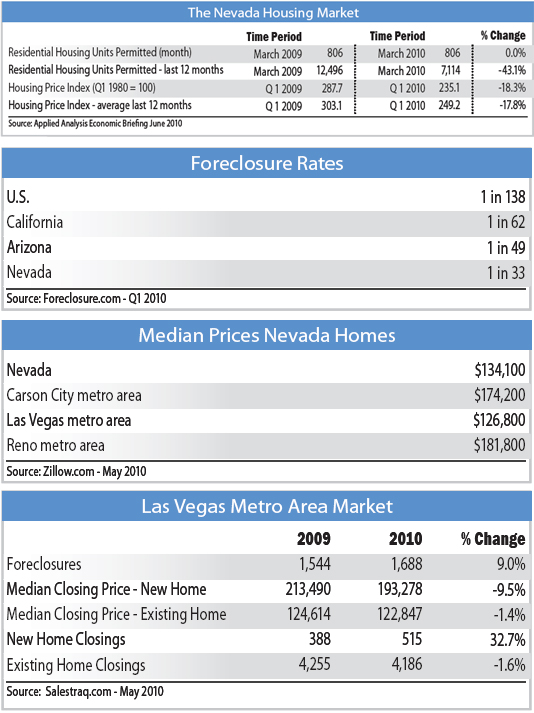 While it’s usually good to be number one, having the highest unemployment rate in the country (measured at 14 percent in May) is an exception to the rule.  Having so many Nevadans out of work or underemployed puts a strain on the rest of the economy, as the unemployed buy less from local merchants, struggle to pay their bills, and use more social services. 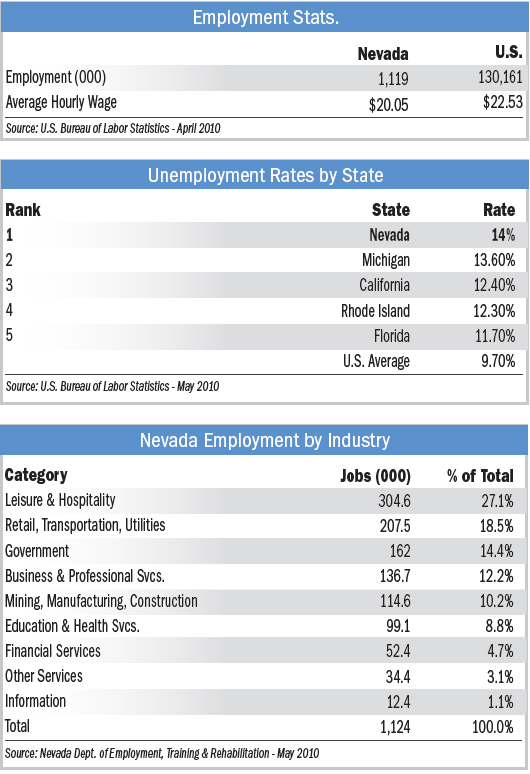 Despite a number of challenges, Nevada is well positioned to attract businesses from other states that are also feeling the effects of the recession.  Nevada’s location near major West Coast markets, the favorable tax climate, and the quality of the workforce make Nevada a good choice for companies seeking to either start up or expand. 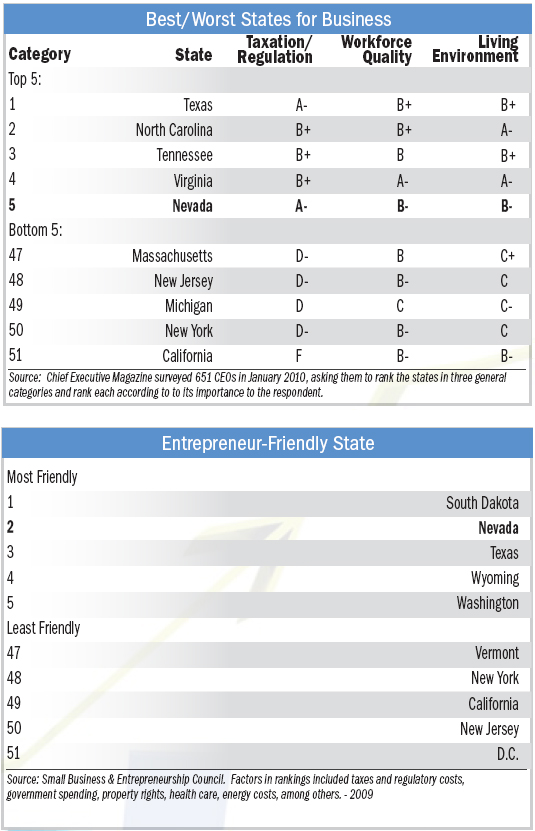